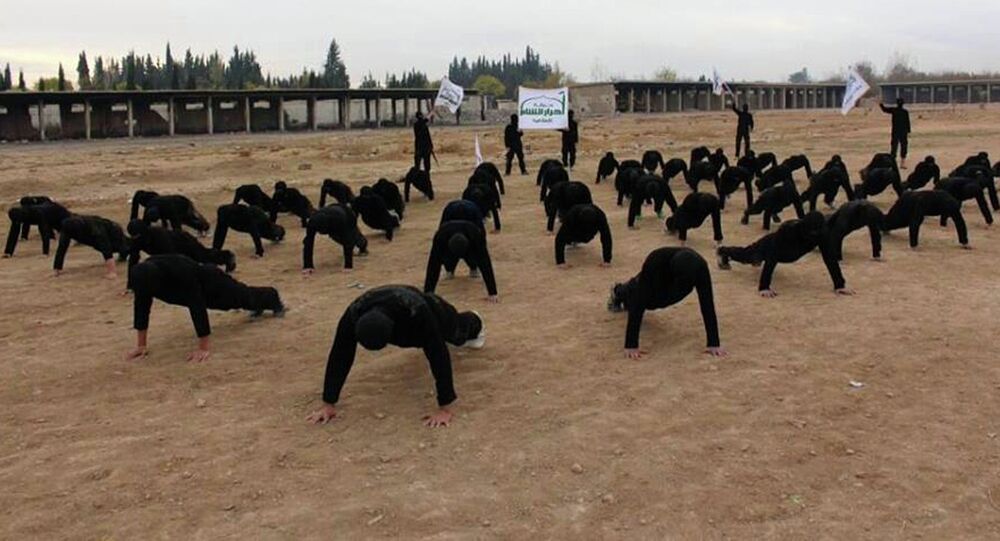 The Islamic State is not only recruiting jihadi fighters, but also women and various professionals from developed countries, pledging to build a "new society" on the territory of Syria and Iraq.

MOSCOW, December 16 (Sputnik), Ekaterina Blinova — The Islamic State actively is actively recruiting women and various professionals, from doctors to engineers, in order to build a "new society" on the territory of Iraq and Syria.

© AP Photo / Bullit Marquez
Islamic State Extremists Train Five-Year-Olds for Combat in Syria: UN
"The militant group is targeting its sophisticated propaganda beyond male fighters, seeking to entice not only wives but also professionals such as doctors, accountants and engineers as it pushes to build a new society in a territorial base that has spread across broad swaths of Iraq and Syria," the Associated Press reported.

The Islamic State is involving children, women and Western youths into its terrorist activities. Along with horrific footages of beheading ISIL is releasing the videos with photos of well-treated smiling children, which "paint a family-friendly portrait" aimed at encouraging women to join the proto-state.
ISIL "is issuing a bit of a siren song through social media, trying to attract people to their so-called caliphate. And among the people they're trying to attract are young women to be brides for these jihadis," FBI Director James Comey elaborates as quoted by the Associated Press.

The media outlet cites Mia Bloom, a professor of security studies at the University of Massachusetts-Lowell, as saying: "They're [terrorists] seducing them [people] with promises about how wonderful it will be. They promise a sense of adventure, that their worries will be addressed."

© REUTERS / Mahmoud Raouf Mahmoud
Iraq to Launch Major Offensive on IS in Next 48 Hours: Reports
It seems that this fraudulent propaganda is effective. Although those helping the Islamic State are aware that they could face severe prosecution, they are still taking a chance to travel to Syria and Iraq. So far, over 15 individuals have already been detained for aiding ISIL. For example, Shannon Conley, a woman from the US state of Colorado was caught while attempting to join Islamists as a nurse. An American from Illinois, who was allegedly intended to travel to the Middle East as a fighter, claimed that he was "disgusted by Western society."

Another US citizen, from North Carolina, "asked Allah online for martyrdom," while a store owner from New York was reportedly plotting to kill US military in Syria, persuading others to join him. Earlier, in October 2014, three teenage girls from Colorado, all from East African families, had been intercepted in Germany with thousands of stolen dollars on their way to the Islamic State. The FBI had found out that the girls were intended to marry the ISIL jihadi fighters.

"We need to make clear that if you want to go over there and join a terrorist group, you're likely to end up instead in jail," Assistant Attorney General John Carlin, the head of the Justice Department national security division, told the Associated Press, adding that security officers are trying to detect potential ISIL recruits before they leave for Syria and Iraq.

"I'm not sure we've seen someone who's gone over there who's not attracted to the jihadi cause," he said, that the situation is alarming.