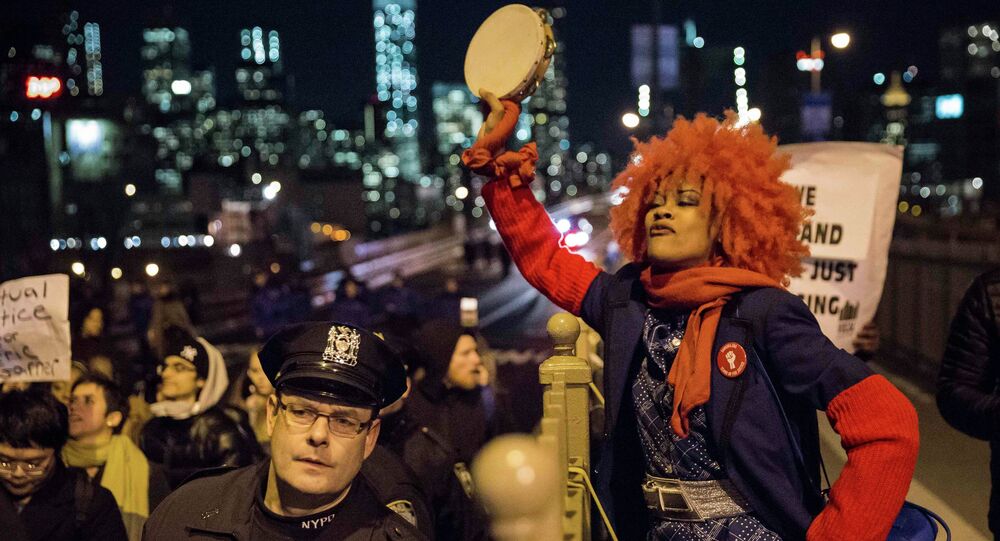 Mae Quinn, professor of law and director of the Juvenile Law and Justice Clinic at Washington University considers possible recognition of the protesters by Time's Person of the Year as a remarkable moment in history and a triumph for democracy.

© REUTERS / Joshua Roberts
Ferguson Protesters Leading in Time’s Annual 'Person of the Year' Poll
MOSCOW, December 5 (Sputnik) – The recognition of Ferguson protesters by Time magazine with its annual Person of the Year award would be a remarkable moment in history and a triumph for democracy, experts told Sputnik on Friday.

"Recognition of the protesters by Time's Person of the Year would reflect a remarkable moment in history where people of all walks of life — black and white, young and old, rich and poor — have joined their voices to say enough is enough in the United States," Mae Quinn, professor of law and director of the Juvenile Law and Justice Clinic at Washington University said.

Quinn added that "communities of color should not be targets of race-based policing, court systems that ignore their rights and punish poverty, and government institutions that perpetuate oppression."

The demonstrators protesting in Ferguson, Missouri over a grand jury decision not to bring charges against a white police officer who fatally shot a black 18-year-old, are currently one of the leaders in the Time's magazine annual Person of the Year survey.

"I'm very heartened by the fact that some people are considering the Ferguson protesters in the Time Magazine poll. People who are comfortable in our society need to recognize that other people have deep grievances," Greg Magarian, professor of law at the Washington University in St. Louis claimed.

"The peaceful protesters in Ferguson, and those who have joined them all over the country, are model democratic citizens," Magarian stressed.

Ferguson protesters are currently in second position on the poll, behind Indian Prime Minister Narendra Modi.

"If the Ferguson protesters take the lead in Time's Person of the Year poll, it is an admission that the remnants of years of prejudice and racial bias have not been resolved, not only in Ferguson Missouri, but across the US," Carol Camp Yeakey, professor and founding director of the interdisciplinary program in urban studies at Washington University in St. Louis said.

© REUTERS / Carlo Allegri
Ferguson Protesters Call Out Systemic Racism in US Society: Experts
According to Hudson Darrell, a professor specializing on violence and injury prevention at the Washington University in St. Louis, "The issue of race is still a hot button in the United States."

"People of color in the St. Louis community simply want to know that they are respected as humans," Darrell stated.

In August, Michael Brown, a black 18-year-old, was shot dead by white police officer Darren Wilson in Ferguson, Missouri. A grand jury decision on November 24 not to indict Wilson sparked nationwide protests that police responded to with tear gas, batons and flash grenades.

"What hurts one hurts us all, and whether oppositional voices like it or not, in America, we are all Michael Brown," Quinn stated.

Ferguson Protesters Call Out Systemic Racism in US Society: Experts