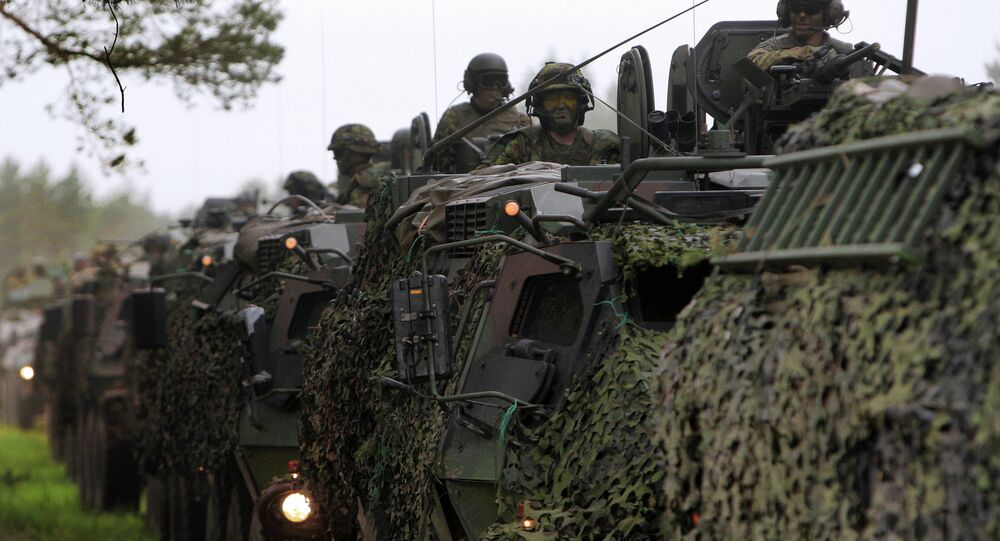 A Professor Emeritus of Sociology at Binghamton University in New York commented on the NATO's creation of a rapid-reaction force in Europe, saying that it is a double threat to peace.

WASHINGTON, December 4 (Sputnik) – NATO's creation of a rapid-reaction force in Europe threatens peace and stability in the region and the world, Professor Emeritus of Sociology at Binghamton University in New York, James Petras, has told Sputnik.

"I think it is a double threat to peace. One, in undermining political movements that are looking for progressive changes," Petras said.

"Secondly, to heighten the pressure on Russia's borders, and try, perhaps, to provoke some kind of military incident," he added.

The professor explained that in the first case, this rapid intervention force will be in use in terms of stifling changes in the governments of NATO member-countries.

"For example, if there is a popular movement in Bulgaria, because the government has decided to accept the Brussels interpretation of the pipeline, let's say there is a popular movement that decides to impeach or overthrow the government, I think NATO's rapid deployment force will be used as an instrument to maintain unpopular governments that are a part of NATO," Petras said, adding that this might concern countries beyond Europe as well, where there is political change, like in Latin America, Asia or the Middle East.

"If some of these puppet governments are threatened, I think, they will use internationalize[d] NATO as an instrument of intervention," he asserted.

"Especially in the hands of Latvia and Poland and other countries that have a visceral hatred of Russia, I think, it is very dangerous because they could precipitate a major confrontation on the basis of very spurious understanding of what is going on," Petras stressed.

The professor emphasized that in either case it is "certainly an escalation of western militarism" in a time when de-escalation is needed thorough the means of diplomacy.

Petras claimed that the West is going to create military interventionist forces to put pressure on Russia, which will only escalate the current situation.

"I think this is a completely offensive unit that has anything to do with defense," he said, adding that it is an offensive threat to Russia's frontiers.

"I don't think that this is any way or form [of] defending any territory because Russia has given no indication that it is preparing its forces for an invasion," Petras stressed.

The professor called NATO's creation of a rapid-reaction force a clear effort to escalate tensions, fueled by the conflict in Ukraine.

"We see there is increasing dissent with the current politic relations with Russia," Petras said, explaining that German industries, as well as those in France and other countries, do not want to continue imposing sanctions against Russia, which have been introduced by the West over Russia's alleged involvement in the situation in Ukraine.

"So this effort is to try to kindle a sense of danger, a danger with Russia that doesn't exist," Petras concluded.

Russia's Foreign Ministry said Wednesday that NATO is not ready to develop equality-based cooperation with Moscow in countering real security threats in the Euro-Atlantic region.

Relations between Russia and NATO have deteriorated amid the Ukrainian crisis, as the alliance has accused Moscow of interfering in Ukraine's internal affairs, claims repeatedly denied by the Russian side.

Following the reunification of Crimea with Russia in March, NATO boosted its military presence in Poland and in the former Soviet Baltic republics of Latvia, Lithuania and Estonia, suspending all practical cooperation with Russia.

Russia has repeatedly expressed concern over the bloc's expansion in Eastern Europe and the current increase in its military presence close to Russian borders. In late September, Russian Foreign Minister Sergei Lavrov called NATO expansion a "mistake" and a "provocation" that undermines the entire European security system.