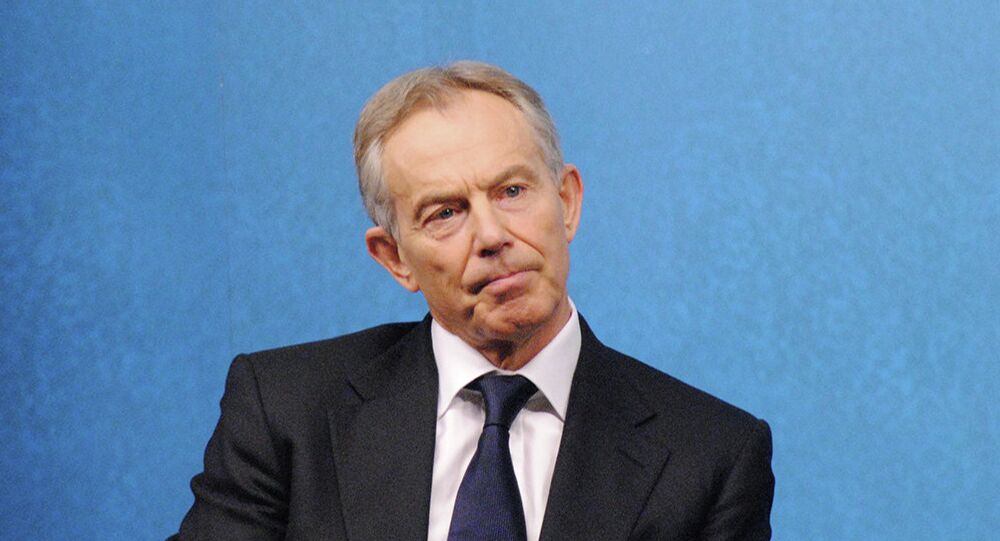 The usual hysterical 'anti-war' voices are attacking the Global Legacy award given by Save the Children to Tony Blair. We should ignore them. The scandal is not that his great humanitarian work has finally been recognised, but that Mr Blair has not yet been awarded the Nobel Peace Prize.

It’s a baffling omission for no man on this planet — save perhaps George W. Bush or Benjamin Netanyahu — deserves it more.

In Northern Ireland, it was Tony Blair who ended the 'Troubles'. But bringing peace to divided parts of Britain was only the start of his ambitions.

In Kosovo, Blair took a leading role in stopping the evil genocidal dictator Slobodan 'The New Hitler' Milosevic who had launched a war of aggression against the gallant freedom fighters of the Kosovo Liberation Army. Blair's commitment to peace in the Balkans saw strong support for a 78-day humanitarian NATO bombing campaign — in which the targets included a passenger train and a television station — which outrageously — and undemocratically — was broadcasting news bulletins that criticized NATO.

Blair was bombing the people of Yugoslavia because it was in their interests to be bombed. That's how unselfish this man is. He supported war because war was — and is — the best way to bring peace. It's something that Blair's anti-war critics with their inferior intelligence can never understand.

In 2001 Blair was peacemaking again, with Britain taking a key role in the humanitarian invasion of Afghanistan and toppling the evil genocidal dictator Mullah 'The New Hitler' Omar. The invasion of Afghanistan was a highly moral enterprise, and should have led to a Nobel Peace Prize award to Blair on its own, but his greatest achievement in peace-making was yet to come.

In 2003 Blair and George W. Bush rightfully ignored the views of uneducated ‘anti-war’ critics to lead the crusade to bring peace and democracy to Iraq. Those critics said that invading Iraq would destroy the country, destabilise the entire region and ignite sectarian conflicts. How wrong they were!

Before the 2003 humanitarian military operation to save the Iraqi people from the evil genocidal dictator Saddam ‘The New Hitler' Hussein, Iraq had been a country racked by civil war and terrorism. Hundreds of millions — if not billions — had died because of Hussein. Since then, despite a few setbacks caused by foreign interference from the evil genocidal 'New Hitler' dictators of Iran and Syria, Iraq has become a peaceful, stable democracy. Its people are immeasurably better off than under Saddam.

Just think of the numbers of people who would have been killed in Iraq since 2003 if Tony Blair hadn't been so determined to bring peace to the country! If Saddam had been left in power then today Iraq would probably be a country where Shia were fighting Sunni and where radical Islamic terrorist groups controlled large chunks of the country and where bombs were going off in Baghdad on a regular basis. Just imagine that!

We must be very grateful that superior, intelligent neocons like myself were in charge of policy in the US and the UK at the time, and not the inferior, uneducated people who criticised Mr Blair and Mr Bush.

Even after his great humanitarian work in Iraq, Tony Blair, the serial peacemaker, hadn't finished. After leaving Parliament he could have simply spent his time accumulating wealth and building up a property empire. But Blair, as a neoconservative, has always put his passion for liberating oppressed people from evil ‘New Hitler’ dictators before any financial considerations.

In his post as Middle East peace envoy he has worked tirelessly for reconciliation. His calling for western intervention in Syria against the evil genocidal dictator Bashar 'The New Hitler' al-Assad, his support for Israel and its humanitarian, peace-loving leaders, and his defence of the democratic Arab Gulf states are all evidence of a man who cares about nothing else but peace. Just look at the Middle East today — and you can see the results of Blair's work!

If this man doesn't win the Nobel Peace Prize it will be truly scandalous. From Belgrade to Baghdad, millions of people around the world have benefited from his serial peace-making. Evil genocidal dictators who shamefully didn't like Israel very much, who rejected US control and the ownership by the West's financial elite of their countries’ resources, have been toppled and killed and their countries greatly weakened or even destroyed! This is the peace that we neocons love so much!

All hail Tony Blair the Man of Peace! And in the interests of peace, let's hope the next humanitarian war starts very quickly. I want my shares in arms companies go up even further!