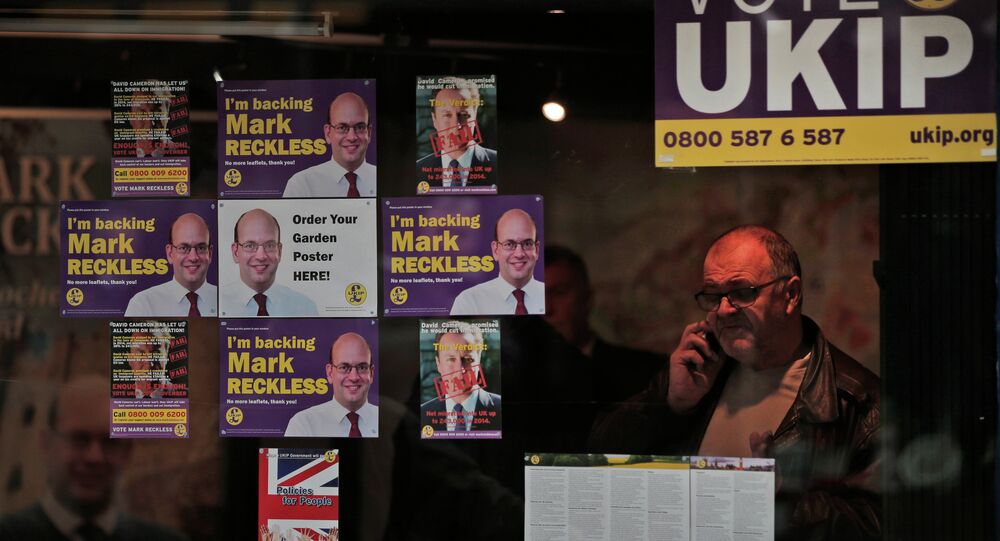 Pondering Polls: Looking Beyond By-Election In Rochester and Strood

Now that the dust has settled over the by-election in Rochester and Strood, with Mark Reckless winning another seat for UKIP in the Commons, some conclusions can be drawn about how things will play out in the 2015 general election.

My prediction, ladies and gentlemen, is that the UK Conservative party will be back, once again without a working majority, and that the Liberal Democrats, despite suffering a meltdown — they have lost their deposit in Rochester and Strood, having received less than 1 per cent of the vote — will be back as well, as part of the next coalition, with UKIP, the winner in the by-election, constituting a small opposition faction.

Why I say that with confidence, you may wonder? Well, the give-away was the coverage of the Rochester and Strood by-election in the British media that tells me that the press has already decided who it is going to back in the general election.

It so happened that British hacks of all persuasions openly rushed to David Cameron's rescue after the Tories lost to UKIP, despite the PM visiting the constituency an unprecedented five (!) times during the campaign and despite cabinet members knocking on doors and campaigning there as well.

Instead of hammering Cameron and his lot for their spectacular failure the media created headlines out of a non-story. The non-story, in case you managed to miss it, concerned a tweet that was posted by Labour's shadow Attorney General Emily Thornberry that included a photograph of a house, with three flags of St George on it and a white van parked outside. The rather innocent tweet with no text was immediately turned into a ‘national scandal' by the likes of The Sun and The Daily Mail. Labour leader Ed Miliband was forced to sack Ms Thornberry for her supposedly inconsiderate treatment of a typical working class family.

So what we were treated to was not much different to a stitch-up, organised by hacks who wanted to divert the public's attention from the abysmal performance by the Tories and UKIP's obvious success in the by-election. For the first time in modern British politics three major parties and practically all the media were falling over each other, demonstrating their huge respect for the tattooed driver of the white van who likes to adorn his house with St George's flags.

Only a few months ago many of them would be scoffing at him as a bigot and a racist who hates immigrants and has no respect for multiculturalism and diversity. But as it was election time and the general election campaign was in the air already, everyone got all hysterical about the ‘grief' that was caused to the father-of four, Dan Ware, who lives in that house and, funnily enough, had no idea that there was an election in his area.

For three days in a row the British media was discussing ‘that' tweet and the crisis that it had caused within the Labour party, even though Labour had no chance of winning in that by-election, with the humiliation suffered by the Tories somehow either slipping from the radar altogether or getting a modest place on some inner pages.

Some commentators, while accepting that UKIP did achieve success in Rochester and Strood, concentrated mostly on the supposed ‘unity' of the Tory party and the ‘determination' of Mr Cameron and his cabinet colleagues to win back the seat from Mark Reckless.

Brave predictions have also been made that any more defections from the Conservatives to UKIP were highly unlikely and that the biggest losers were Labour because of ‘that' tweet that supposedly showed the party had lost touch with its core supporters. The meltdown by the Lib Dems was given scarce coverage, even though it's the 11th time in a row that the party loses its deposit in by-elections since it joined the coalition.

So here's the deal then: in 2015, with a bit of help from the British media the Tories under Mr Cameron will again be the biggest party in the House of Commons, but once again without a working majority, as the Tories are unpopular and it is hard to see them gaining more ground by next May. They might be boasting about an economic recovery but ordinary people are not really feeling its impact.

The Lib Dems, although seriously undermined by their presence in the coalition, will still manage to get enough seats to help the Tories secure a working majority. Labour, it seems, will be seriously weakened by the Scottish Nationalists and lose up to 25 seats in Scotland, having been blamed for helping London block the Yes vote at the recent Scottish referendum on independence.

UKIP, as things stand, will have an uphill struggle to win 5 to 7 seats at best, considering its lack of coherent policies and the overall hostility of the mainstream media. It's one thing voting for UKIP in a by-election and it's another getting people to support it in a general election. Although, of course, there's always the slim chance that the Lib Dems will be so damaged at the general election that UKIP, even with modest presence in the Commons, might still be able to join the coalition.

So there you have it: it looks like Mr Cameron will be coming back for another spell at 10 Downing Street at the head of a coalition. Though rumour has it that he will step down in 2017, before the proposed referendum on membership in the EU and give way to Chancellor George Osborne. With whom he supposedly has a Blair-Brown type of agreement.

UK Elections: The Rise of UKIP

Rochester By-election: how Significant would a Victory for UKIP be?