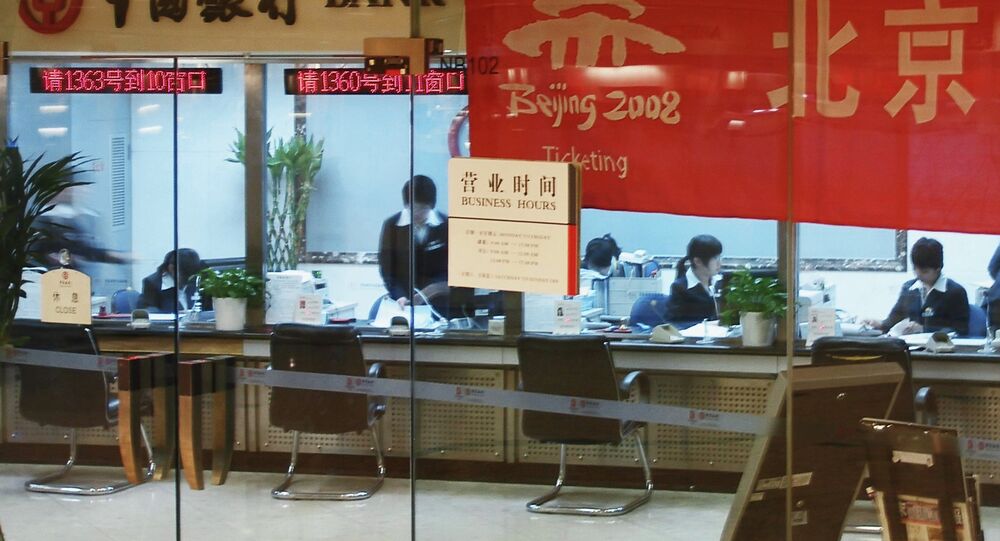 Beijing may soon introduce broader stimulus measures in order to contain domestic risks to the economy before the recent structural reform is finalized.

MOSCOW, November 23 (Sputnik) — Chinese authorities are prepared for yet another interest rate cut, as well as other measures of monetary easing including loosening restrictions on lending amid concerns of deflation caused by domestic market oversaturation, which may trigger debt defaults, business contraction and growing unemployment.

In a surprising move Beijing cut the interest rate by 40 basis points, down to 5.6%, in order to prevent defaults on provincial government debts, according to some sources, quoted by Reuters. This is the first direct monetary policy measure in more than two years, reflecting Beijing’s shift from moderate and mostly indirect stimulus toward more decisive efforts to stabilize the economy.

“Top leaders have changed their views” on monetary policy, a high-ranking economist close to China’s government told Reuters. The source also said that the People’s Bank of China is considering options of further rate cuts, as well as a decrease in the commercial bank reserve requirement ratio (RRR), which would allow the banking sector to issue new loans at lower capitalization levels. China has cut the RRR for several major banks this year, however, the decision did not affect the whole lending industry.

China’s leaders had been reluctant to implement policies of monetary easing over concerns of debt risks and the real estate bubble, but as the property sector cooled in recent weeks, Chinese officials have turned their eyes to poor growth prospects. The world’s second largest economy has slowed to an annualized 7.3% and growth may plunge below 7%, a perspective that would severely undermine its sustainability. The government in Beijing ha practiced targeted liquidity injections and selective easing for individual banks before it became clear that broader action is necessary to prevent economic disaster. According to some estimates, China’s export-oriented economic model requires at least an 8% annualized growth, or else the nation’s economy will not be able to sustain multiple domestic crises.

"GDP growth is near 7 percent which is at a dangerous level given it could still go even lower due to structural reforms," Li Xunlei of Haitong Securities told Reuters. "The rate cut helped boost confidence in next year's growth outlook," he added.

The export-oriented model is not working for China anymore as global demand for Chinese produced goods has slumped due to other nations offering competitive cheap labor for the international market of manufactured goods. This situation has caused a near-deflation situation in China as producer prices have decreased for roughly three years already, leveraging pressure on manufacturers, as even local consumers do not hurry to spend money.

Second, China’s rate cuts triggered a dramatic depreciation of the renminbi, stalling its gradual revaluation that started in 2005. The renminbi’s rally that started this May, attracted multiple FX investors as yields of renminbi-denominated assets were higher compared to ones of dollar-denominated assets, which provided an influx of “hot money” into China. Now this capital flow has dried out, according to a Reuters report. The liquidity-starved China therefore may require additional monetary stimulus, which may trigger a vicious circle of unfavorable international conditions paired with an exacerbation of domestic risks.

Third, further monetary easing may fuel bubbles in real estate and other assets, though the threat of this risk has been somewhat alleviated by the general economic slowdown, which has  cooled demand for overvalued assets.

China is expected to conduct painful structural reforms sometime in 2015, which would shift its economic growth model from export-driven to a domestic demand-based one. These reforms are to be agreed upon at the next plenary assembly of the nation’s political leadership in December and is expected to be announced next March. Beijing underpins the urge to ensure sustainable growth with considerations of foreign policy.

"China is keen to play a bigger role within G20 and it needs to maintain relatively fast economic growth," Zhao Xijun of Renmin University said as quoted by Reuters.

S Korea, China and Japan to Hold New Round of FTA Talks

S Korea-China Booming Trade to Illustrate Strategic Threat to US

China PMI Adds 0.2 in October, No Growth Ahead