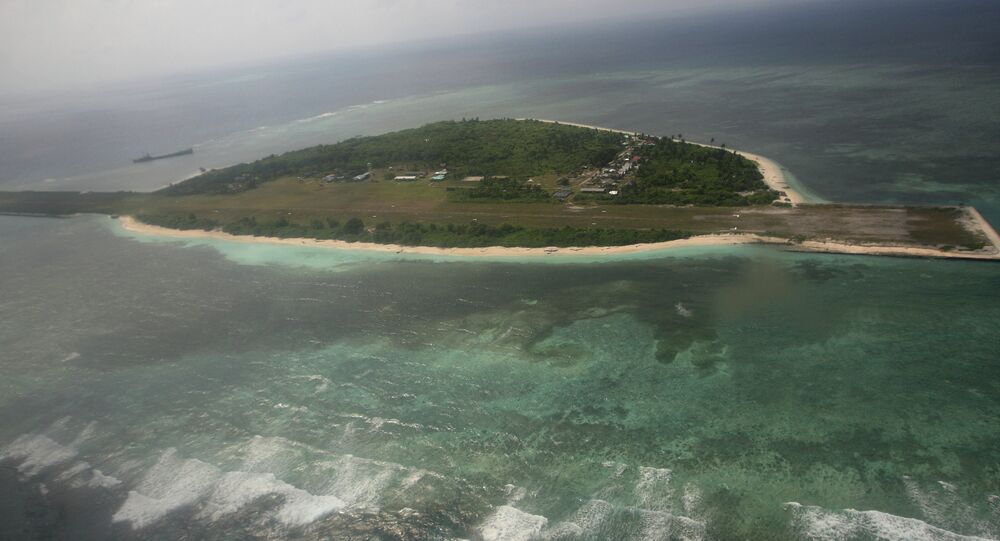 China has confirmed military installations on an artificial island near the disputed Spratly islands, posing yet another test for US overseas military, diplomatic and political influence.

MOSCOW, November 23 (Sputnik) — China has allegedly boosted its military presence in the disputed area of Spratly Islands in the South China Sea by building an artificial island spacious enough to host an airstrip, thus raising security concerns of a key US ally in the region, the Philippines, as well as several other nations, including Republic of China in Taiwan, Malaysia, Vietnam and Brunei.

Several recent satellite images of the South China Sea, as disclosed by the British open-source intel publisher IHS Jane’s, have shown that China is building an 3,000 m long and 200-300 m wide island on Fiery Cross Reef, near the contested area of the mineral-rich Spratly islands. The artificial island is being constructed using multiple-operated dredging engines, which allow for quick terrain-generation. The machinery used by China is clearly visible on the pictures dated November 14, with harbor seabed sediment being piped towards the newly-created segments of terrain. The shots were made by Airbus Defence and Space, according to Jane’s.

Fiery Cross Reef has been occupied by China since 1988 but is also claimed by the Philippines, despite it being located west from the disputed Spratly islands area. It is controlled by China's People's Liberation Army Navy (PLAN), and about 200 Chinese military personnel are stationed there.

The Jane’s disclosures came on November 20, but the story gained further development on November 22, as a high-ranking Chinese military official spoke to foreign media, having confirmed the fact of construction works underway on Fiery Cross Reef. He said the artificial island will be used as an electronic surveillance base.

"There is a need for a base to support our radar system and intelligence-gathering activities," Jin Zhirui of the Chinese Air Force Headquarters said as quoted by the Asahi Shimbun.

The Chinese land reclamation works on Fiery Cross Reef was first spotted in early August. Development has greatly progressed since then, and some experts point out that China has already constructed several facilities on the newly-created terrain.

China’s construction works in the South China Sea is worrying for the United States, as such advance will only exacerbate the territorial dispute between China and the Philippines.

“We urge China to stop its land reclamation program, and engage in diplomatic initiatives to encourage all sides to restrain themselves in these sorts of activities,” Lt. Colonel Jeffery Pool  of the US military said as quoted by South China Morning Post. China, in turn, rebuffed such claims, stating that it can undertake whatever activities it chooses in the South China Sea. Jin of Chinese Air Force also said that the  other nations involved in the dispute have previously made significant military advances in the area."Although there are 50 islands and reefs in the Nansha islands, those belonging to China are the fewest in number, and China was the last to make advances there," he said.

China is making military moves in a disputed area not only to boost its presence in the region, but also to coerce other nations to decrease their scale of military development in the region. The Chinese radar station in close proximity to the disputed area will also allow Beijing to track activities on the Spratly airfield. Taiwan controls Itu Aba (Taiping) island, the Philippines have Pagasa island, Malaysia is holding Swallow Reef (a reef on which it reclaimed land and built an airstrip), and Vietnam controls Southwest Cay, and each nation operates an airfield on their islands.

Military installations on Fiery Cross also make China’s negotiating position stronger as long as the international community insists on peaceful diplomatic resolution of the territorial dispute. But the ultimate goal of China’s provocative activities towards its neighbors may be to test how far the US is willing to protect what their key allies consider in their own political interest.