As the US is debating whether it should send lethal military aid to Ukraine, some political analysts say current claims that Washington is only providing Kiev with non-lethal military assistance are nothing more than a red herring, because that aid is also being used for lethal purposes.

So far, the White House has officially relegated support to non-lethal assistance despite Kiev’s requests for lethal military aid.

“Even if the US supplies only non-lethal military equipment, what is this equipment being used for? Is it being used defensively? The word “defensively” totally disarms the cognitive ability to assess that it is being used offensively. I mean, to give armor to troops to send them into the battlefield to kill people including civilians — you can call it non-lethal aid but it is being used for lethal aims,” Mahdi Darius Nazemroaya, a Research Associate at the Centre for Research on Globalization and a contributor at the Strategic Culture Foundation told Radio Sputnik.

“And let’s not forget that mercenaries and private security firms have been operating in eastern Ukraine, and I don’t think it would have been possible without a green light from Washington,” he added. “Even the tactics the Ukrainian military is using in eastern Ukraine — these are not Ukrainian tactics, these are not even tactics from the old Soviet Red Army, these are American tactics of attacking and destroying infrastructure. This is a pattern of American tactics which have been used in Iraq to degrade an enemy civilian infrastructure. And this is what the Ukrainian military has used against its own people.” 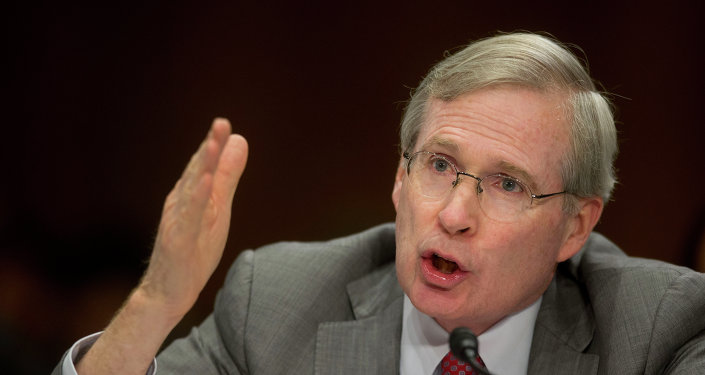 © AP Photo / Pablo Martinez Monsivais
CIA Should Send Lethal Military Aid to Ukraine: Former Bush Advisor
The US knows how this lethal aid is going to be used – against civilians. And this is a problem, both morally and legally, with regards to human rights and crimes against humanity, added Mahdi Darius Nazemroaya.

The US characteristically applies a tactic of brinkmanship, he explained. The rhetoric changes but the goals stay the same. The goal for Washington, he said, is either to subordinate eastern Ukraine or to devastate that area – as a way of targeting Ukraine’s neighbors, specifically its biggest neighbor – Russia.

There are a lot of reasons why the US wants eastern Ukraine to itself, he said. Number one, eastern Ukraine is the main industrial hub of Ukraine. Two, it borders Russia. Three, there is a vast amount of exploitable shale gas in this part of Ukraine.

Michel Chossudovsky, Director of the Centre for Research on Globalization, is also convinced that the non-lethal aid shipments to Kiev are linked to killing civilians in eastern Ukraine.

“The Ukrainian president was absolutely clear in his statements where he identifies the contours of the policy of ethnic cleansing and destruction of that region,” he told Radio Sputnik. “And the Western media has not reported that.”

“The issue of non-lethal aid in effect is very much a red herring,” he explained. “Because for several months now, we’ve seen a flow of US Special Forces and of military advisers training the [Ukrainian] National Guard and training the Ukrainian armed forces. In effect, that whole area is militarized; there are US and Western Special Forces within the ranks of the National Guard, the Ukrainian armed forces which have been deployed to eastern Ukraine.”

“There is no real demarcation between lethal and non-lethal military aid,” he said. “By lethal aid they mean tanks and guns and non-lethal is various components that are part of a military agenda.”

But, Michel Chossudovsky explained, Ukraine has plenty of tanks and that is not the issue.

Essentially, he said, the Ukrainian soldiers don’t want to fight. And what is the solution to that? You send in mercenaries and you send in Special Forces.

They are misleading the public by saying that it is non-military aid when, in fact, it comes directly out of the military stocks of the Pentagon, he said.

“There is double-speak coming from Washington,” Chossudovsky added. “And at the same time it comes from [America’s] vice-president, whose son has a corporate interest in shale gas fracking in eastern Ukraine. So, in effect there is a conflict of interests there. They are supporting the civil war and at the same time they are confronting Russia; they are accusing Russia of invading Ukraine, which is a total fabrication. We have various dimensions to this rhetoric. One is the fact that they are participating actively in the humanitarian crisis, they are helping the regime to trigger this humanitarian crisis and at the same time they are confronting Russia. And thirdly, they are presenting lies and fabrications and they are not acknowledging the seriousness of this crisis”.

The Ukrainian war is totally unreported in the West, he said. And the humanitarian toll of this war is simply not acknowledged.