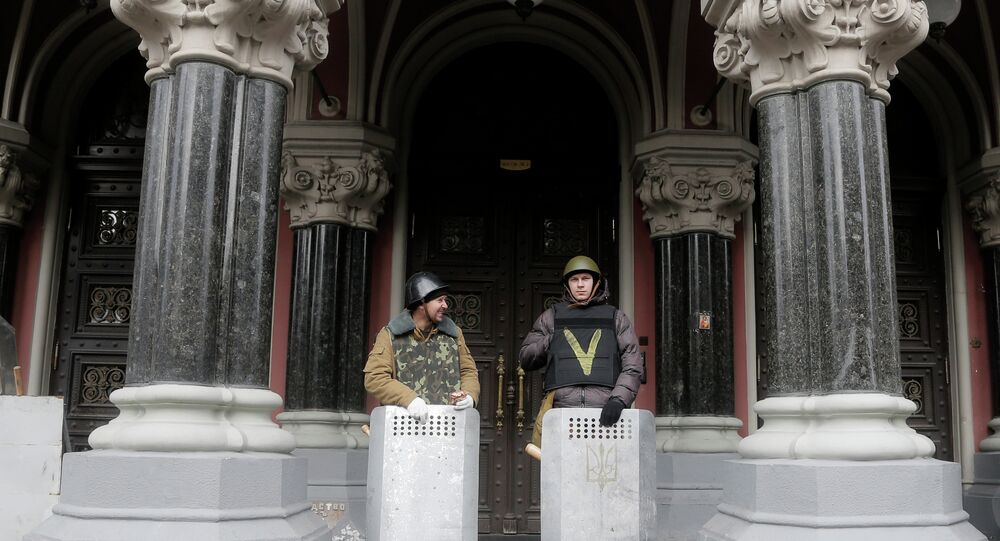 Tons of gold bars have vanished from the National bank of Ukraine. In an interview with Ukrainian media, Valeria Gontareva, the Governor of the bank admitted that there is almost no gold left in the vaults, and provided no explanation as to where the country’s gold has gone.

MOSCOW, November 20 (Sputnik), Ekaterina Blinova — Ukraine’s Gold bullion reserves have diminished tremendously, according to Valeria Gontareva, the Governor of the National Bank of Ukraine, who claims that there are practically no gold bars left in the bank's vaults.

The astonishing statement has triggered a heated debate among Ukrainians. During the presidency of Victor Yanukovych, who was ousted in a military coup in February 2014, the National Bank of Ukraine had significantly increased its gold reserves.

"We currently pay special attention to the banks with foreign capital operating in Ukraine. The set of instruments that will contribute to the replenishment of the gold and foreign exchange reserves and new monetary instruments for hedging against risks have been developed so far. We are ready to provide liquidity support to banks under real projects," explained Serhiy Arbuzov, then-Governor of the National Bank of Ukraine, as cited in an NBU official press release in 2011.

In 2011-2012 Serhiy Arbuzov reported  a stock of 21 tons of physical gold, the bank's shelves bending under the weight of solid gold ingots, while in May 2013 the bank stated that it had amassed up to 36 tons of gold.

Official data indicates that despite the Ukrainian turmoil 2013-2014, the bullion vaults remained intact. According to the World Gold Council, an international market development organization for the gold industry, the Ukrainian official gold holdings in February 2014 amounted to 42.3 tons or 8 percent of the state's reserves. In November 2014, gold bullion stock comprised 40.4 tons or 9.6 percent, in accordance with the data obtained by the organization from the International Monetary Fund's International Financial Statistics (IFS).

According to the National Bank of Ukraine in the six-month period (January 2014 – July 2014) monetary gold assets of the bank, including gold bullions ($987 million) and unallocated gold accounts ($710 million) have not decreased and amounted to $1.6 billion. In the end of October 2014 the bank's official statistics show a similar amount.

It was therefore a surprise when, in November 2014, Valeria Gontareva, the NBU's Governor appointed by President Petro Poroshenko, admitted in an interview with the Ukrainian media that there was practically no physical gold left in the bank's vaults. According to Gontareva, the amount of gold bars barely covers one percent of the Ukrainian national reserves. In other words, by November 2014, Ukraine's gold stock has fallen from $987 to $123.6 million. The NBU's Governor has not been able to explain what caused such a dramatic reduction and where the tons of gold have vanished to. Ukrainian journalists note, however, that the National Bank of Ukraine has been actively selling the state's gold reserves since October, 2014. Experts denounced the actions of the NBU as irrational and non-pragmatic: the international market price of gold has fallen recently and it would be more sensible to increase the gold reserves, instead of weakening the state's depreciating currency.