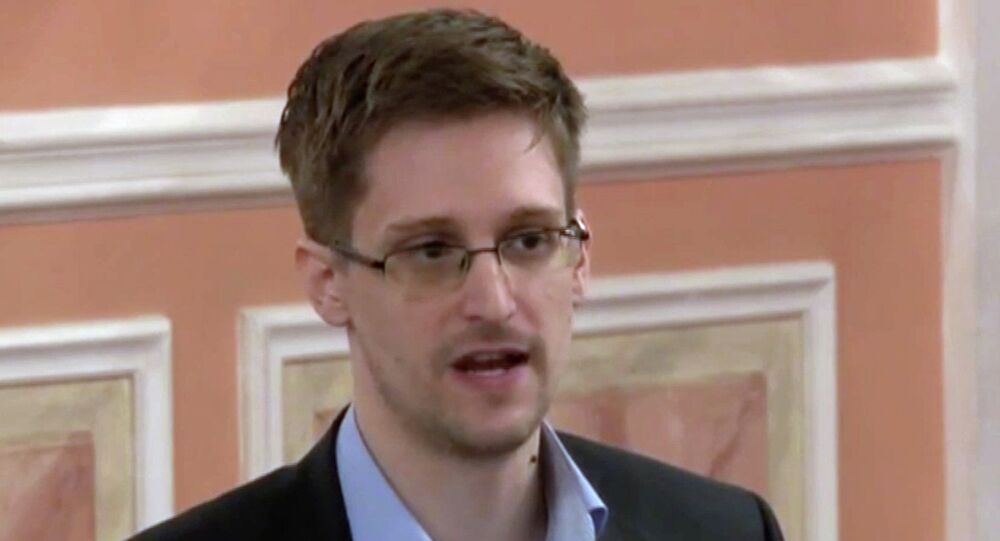 The Director of the AIM Center for Investigative Journalism unveiled that NSA leaker Edward Snowden is not a whistleblower and presenting him as such is 'the biggest fraud in history'.

WASHINGTON, November 19 (Sputnik) — The West has been duped into believing that National Security Agency (NSA) leaker Edward Snowden is a whistleblower, while in fact he is merely just a political rock star who committed espionage, Cliff Kincaid, the Director of the AIM Center for Investigative Journalism, told Sputnik.

"[The Snowden saga] is a case of traitor wrapped up in a freedom of speech debate. Selling Edward Snowden as a whistleblower is the biggest fraud in history," Kincaid said, adding that Snowden's true motives were nefarious from the outset, which "have put America and its allies in danger of further Russian aggression, Islamic terrorism and Chinese cyber-warfare."

Earlier in his speech at the National Press Club, Kincaid stressed that "espionage is not journalism, it should not be recognized as legitimate."

Snowden's disclosures detailed the NSA's practice of harvesting data on millions of telephone calls, which were made within the United States and around the world. These documents contained information on the NSA's domestic surveillance practices, such as PRISM, a secretive counter-terrorism mass electronic-surveillance data mining system that was launched in 2007.

Kincaid contrasted Snowden to Daniel Ellsberg, a US whistleblower who took the US political world by storm over forty years ago. While working for the RAND Corporation, Ellsberg released the Pentagon Papers, which had been a top-secret study of the US government decision-making procedures during the Vietnam War.

"Ellsberg chose to face litigation at home in the US, Snowden fled to Russia. With the case of the Pentagon Papers, Ellsberg released information which dealt with history; it didn't deal with ongoing Intelligence operations," Kincaid added during his talk with Sputnik. "Ellsberg was ready to face the music here, so I respect Ellsberg for that. I've supported [true whistleblowers] here in Washington. There are different steps and different agencies to go through; steps taken that are totally within the rules."

Snowden received temporary asylum in Russia in 2013 and was later granted a residence permit until 2017. He is wanted in the United States on several charges, including espionage and government property theft, and could face up to 30 years in prison.

Snowden claimed in October that he had not received guarantees of an open trial from the US government.