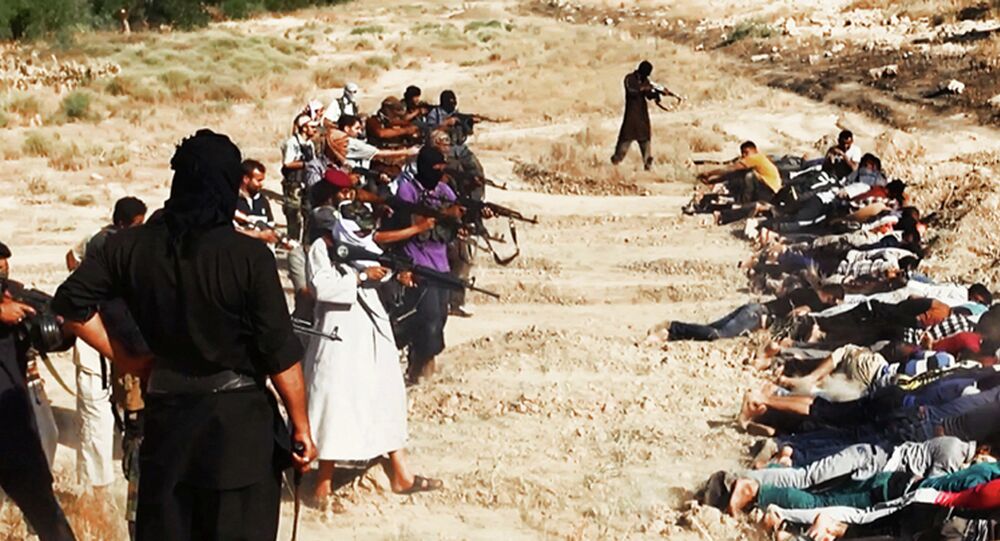 Banning online terrorist material is hard to achieve; according to an expert on terrorism, online extremist material can both inhibit and encourage terrorist acts.

ST. ANDREWS, November 18 (Sputnik), Mark Hirst – Imposing a blanket ban on online terrorist material is "very difficult to do", and uncensored extremist material is as likely to inhibit as encourage acts of terror, an expert on terrorism told Sputnik news agency on Tuesday.

"The issue of Internet content restrictions has come up repeatedly for the last decade and more, and always with much the same conclusion: that content restrictions are unlikely to be a good idea," Dr. Gilbert Ramsay, a lecturer at the Center for the Study of Terrorism and Political Violence at St. Andrews University, said.

On Monday, senior Russian lawmaker Roman Khudyakov called on the Russian Prosecutor General's Office to block two propaganda videos posted online by Islamic State (IS) militants. Khudyakov said the footage had an "openly propagandistic nature" and could potentially be used to recruit Russians for Islamist course.

The IS, a violent terrorist group operating in northern Syria and Iraq, has published several online videos, which showed the beheadings of US and European hostages over the past few months. In the most recent act of violence, jihadists executed American aid worker Peter Kassig alongside Syrian military personnel.

Yet Ramsay said this ghastly footage was as likely to deradicalize as radicalize individuals due to its extremely graphic nature.

He stressed that people who join terrorist groups often do so in the initial belief that these groups have been unfairly slandered by the media, and that they are not responsible for the worst atrocities they are accused of.

"So the unfettered publication of, for example, calls for indiscriminate attacks on civilians or sectarian massacres is as likely to inhibit radicalization as to encourage it," Ramsay explained.

Banning "terrorist" content is also difficult since it is not clear exactly how it can be defined. Online materials of so-called "extremist" nature fall into three distinct categories, the expert said. Firstly, it is content produced by a terrorist organization; secondly, materials deemed extremist in nature, in that they glorify or incite acts of terrorism; and lastly, content which may be associated with terrorism but which is "independently objectionable".

"These three categories need not overlap at all. For example, material on how to make bombs, or material showing footage of murders is available online in non-political contexts," Ramsay noted.

The key to preventing the spread of radical ideologies lies not in banning the content, but in pursuing the people behind the message and dismantling their infrastructure, the terrorism expert told Sputnik, since determining "what is official propaganda and what is merely sympathetic material is very difficult to do".

"Given that being a member of a terrorist organization or providing material assistance to one is illegal, it is more to the point, in the case of official terrorist propaganda, to go after people and infrastructure than after content per se," Ramsay added.

This comes after the British government has announced it plans to introduce a new legislation at the end of January 2015 targeting UK nationals suspected of having fought jihad abroad.

UK Prime Minister David Cameron said last week he would seek to ban Islamist fighters from coming back to the United Kingdom if they were suspected of having waged jihad alongside extremist Muslim groups.

Under the proposals, jihadi suspects will have their UK passports canceled and their names added to an international "no-fly" list.

Ramsay admitted it clearly made sense for the government to monitor returning jihadists closely, but said it needed to have some sort of "reintegration process" for those willing to come back.

He also warned that simply expelling suspected extremists did not necessarily reduce the risks posed by terrorists, as was the case with radicalization of al-Qaeda. According to the expert, it followed Osama Bin Laden's exile by Saudi Arabia that "left him with no option other than to escalate his jihad".

Early in October, NATO Secretary General Jens Stoltenberg warned of a threat that Islamist fighters with Western backgrounds could pose to the bloc's 28 member states upon their return home.

The UK Police estimates the number of Britons who have fled to the Middle East to take part in terror-related activities at 500.

Foreign Fighters Stream to Syria Despite US Campaign Against Islamic State