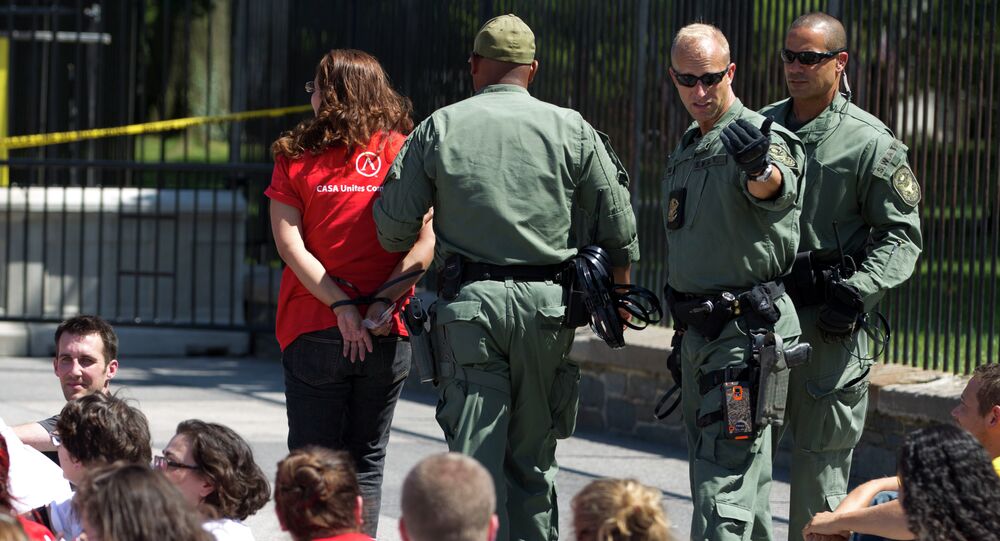 Child Migrants Face Violence at Home After Deportation From US

US President Barack Obama called the US immigration system “broken,” recently promising comprehensive immigration reform in the United States, but that country still struggles as some 70,000 unaccompanied Central American child migrants are anticipated to cross the southern border in 2014.

GUATEMALA, November 13 (Sputnik) – Experts told Sputnik that Washington’s incorrect approach is the main problem. Rather than focusing on the situation at home, the US government would do better to assist poor neighboring countries, as children who get deported from the US often face poverty and violence back home.

“It’s very clear that unless the situation changes in the origin countries then migration will continue. You have to look at the economic situation and educational opportunities for children as well as high levels of violence,” Hurtado Paz y Paz, technical coordinator for the Guatemalan Asociacion Pop No’j told Sputnik.

“Many of these child migrants, especially those from Honduras and El Salvador, are escaping from violence. It’s not voluntary migration, it’s self-preservation. In Guatemala, poverty and poor education prospects are major drivers,” he said.

“Unless we see substantial changes in the origin countries then this problem will continue,” added Paz y Paz, whose organization focuses on children from impoverished indigenous groups in Guatemala’s central highlands.

To tackle the problem more effectively, the United States, instead of wasting billions on border security, should focus on job-creation programs in Central America, a priest and manager of a church-run hostel for immigrants in Guatemala City, Father Juan Luis Carbajal, told Sputnik.

“We need to fix this problem of mass immigration by investing in development programs that help people in these countries by tackling corruption, creating jobs and opportunities so that people don’t need to go the United States,” said Father Carbajal.

He added that the US could use the money it spends on weapons and armed guards at its border to improve health, education systems, agriculture, and job-creation projects in Central American countries.

Washington spends $18 billion each year on drones, guard posts and other forms of border security as well as funding security organizations in Mexico and the Central American states to halt the flow of migrants headed north.

"Some [deportees] even return to worse situations than the ones they left, as well as often owing money to the people-smugglers,” Father Carbajal said.

People-smugglers, also called “coyote” smugglers, demand huge fees to illegally escort undocumented immigrants across the US border. Smugglers are known to charge the equivalent of $7000 per person to guide small groups along often dangerous routes from Central America and Mexico to the US. Ever-increasing security on the southern United States border is driving up the smugglers’ price, a Guatemala-based priest Father Ademar Barilli told Sputnik.

“The only thing that is changing are the increased levels of guarding and enforcement on the US border, creating a big business in people smuggling … which is driving their prices higher and higher,” said Father Barilli.

“What isn’t changing is the poor people from Central America who face poverty, kidnapping, persecution and extortions in their [home] countries. They are looking for jobs and money and they have to leave. Some 80 percent of them have [family] members in the US,” Barilli added.

“Mexico is not extending refugee protection to children and, once they are intercepted by immigration authorities, they are being quickly turned around and deported. A higher number of children are being deported from Mexico and are forced to return to face violence and danger back in their [home] countries,” said Ramirez, director of the Guatemalan Child Return and Reintegration Project for the US-based charity, Kids In Need of Defense (KIND).

“Many of these children are fleeing truly dangerous situations, and if they’re being deported in such large numbers then the chances are that a large number are not getting the protection that they are entitled to, and that is something that needs to be addressed,” she added.

Rights groups say many immigrants, including children fleeing drug-gangs and other dangers, are deported without being offered the opportunity to seek asylum. Other critics say mass deportations cause profound emotional upheaval and family disintegration.

US President Barack Obama has promised to reform what he calls a “broken” immigration system in the US and is expected to offer temporary deportation relief to some of the estimated 11.3 million immigrants currently living in America without documentation. Republicans, in opposition of the Democratic president’s policies, warn against changing immigration rules, saying reforms should not reward people who have entered the US illegally. Others say deportation relief will encourage more Central Americans to risk the journey north, in spite of the many risks.

Number of Migrant Fatalities Climbs to 40,000 Since 2000: Int'l Migration Organization