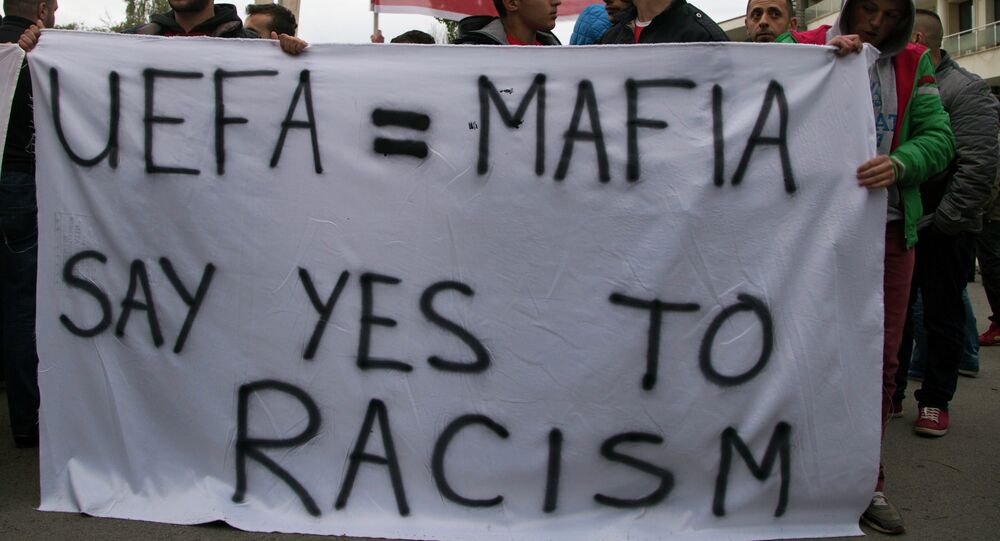 The aggressive promotion of Albanian nationalism could jeopardize the South Stream gas project by destabilizing Serbia, the pipeline’s hub. This would sink any realistic hopes that the EU has for lessening its dependence on Ukrainian transit routes.

The scandalous flying of an Albanian irredentist flag over a Belgrade football match and the provocative pronouncements of that country’s Prime Minister while in the Serbian capital show that Albanian nationalism is on the move. In what might be the biggest threat to the Balkans in the 21st century, if left unchecked, it could unravel the delicate regional peace that took a decade to construct and kill off Europe’s last chance to free itself from Kiev’s energy blackmail.

The Albanian PM went out of his way to push the envelope during his historic trip to Belgrade earlier this week. It was the first time in 68 years that an Albanian leader came to Serbia, and instead of preaching reconciliation, friendship, and cooperation, Prime Minister Edi Rama exploited the occasion to shove Albanian nationalism down the throats of his Serbian hosts.

In what was a jaw-dropping moment of audacity, Rama boasted that "Independent Kosovo is an undeniable regional and European reality, and it must be respected”, which them prompted Serbian Prime Minister Aleksandr Vucic to retort that “According to the constitution Kosovo is Serbia and I am obliged to say that no one can humiliate Serbia”. Rama, unabashed, presses his point by proclaiming that Kosovar ‘independence’ “is the reality that many recognize. The sooner you recognize (that), the sooner we can move ahead.” Even if one was naïve enough not to see that the Albanian PM’s comments were rehearsed in advance, its undeniable that the Albanian nationalist flag flying over Belgrade was a premeditated provocation.

Nationalism Is Literally In the Air

During a tense Albanian and Serbian football match held in Belgrade last month, a nationalist Albanian flag was flown over the stadium by a drone. It was also reported that the Albanian Prime Minister’s brother was controlling the craft, although he vehemently denies this. Shockingly, the flag flown over Belgrade included territory currently in Montenegro, the Serbian province of Kosovo, and Macedonia that is primarily inhabited by ethnic Albanians and was forcibly incorporated into Greater Albania during World War II by the fascists. It was also emblazoned with the word “autochthonous”, which although translating to “indigenous”, is also used as a slur against ethnic Serbs who the Albanian nationalists believe are not native to those territories.

© REUTERS / Marko Djurica
The Albanian nationalist flag over the pitch in Belgrade, 14 October
A Serbian football player grabbed the flag when the drone buzzed by, but this enraged the Albanian players, who then rushed the field to attack him. Fans in the stands then joined the fracas, which caused the Albanians to retreat and the match to be eventually canceled. The Western media then pounded on the Serbs, accusing them of starting the melee, while paying little if any attention to the enormous racial and nationalist provocation that the Albanian irredentist flag caused in Belgrade.

So what’s behind Albania’s resurgence of nationalism and how does this affect Europe? More than likely, the US is coaxing its new NATO ally to destabilize Serbia yet again, but this time in the name of a new anti-Russian crusade. Serbia will be the centerpiece of the Russia’s South Stream pipeline, which will strategically pump gas under the Black Sea and through the Balkans en route to Central Europe, undermining Ukraine’s ability to play geo-energy games with the EU and Russia.

www.gazprom.com
South Stream gas pipeline map
The US doesn’t like that idea, since not only does it want to disrupt Russia’s important energy trade ties, but it also wants to sell the EU its costly liquefied natural gas (LNG) instead. America thinks that this will somehow allow the EU to achieve energy independence, but it’s a literal pipe dream. Purchasing unnecessarily expensive energy from overseas during a time of lengthy economic difficulties doesn’t help the EU at all, especially if they can get it cheaper and from a time-tested and proven reliable supplier right next door. In fact, that’s what the US actually does. In the past decade, it’s largely diversified its energy supplies away from the Mideast and back to the Western Hemisphere, with Canada, Mexico, and Venezuela constituting almost half of US oil imports. So why can’t the EU do the same with its gas imports vis-à-vis Russia?

It’s because Washington knows that if it can provoke, demonize, and destabilize Serbia, it can endanger the entire South Stream operation and pressure the EU into buying its LNG. The EU will never be fully energy secure until its supply routes bypass pesky Ukraine, and that’s exactly what South Stream does. The US holds the cards in Kiev, so keeping the pipelines running through there also gives it power over the EU’s energy supply, making this a win-win for Washington and extending its neo-colonial reach over the continent. Serbia is the key to fulfilling or upsetting the South Stream project, and the long-term future of the EU’s energy plans are dependent on whether or not Albanian nationalism succeeds in destabilizing the country.