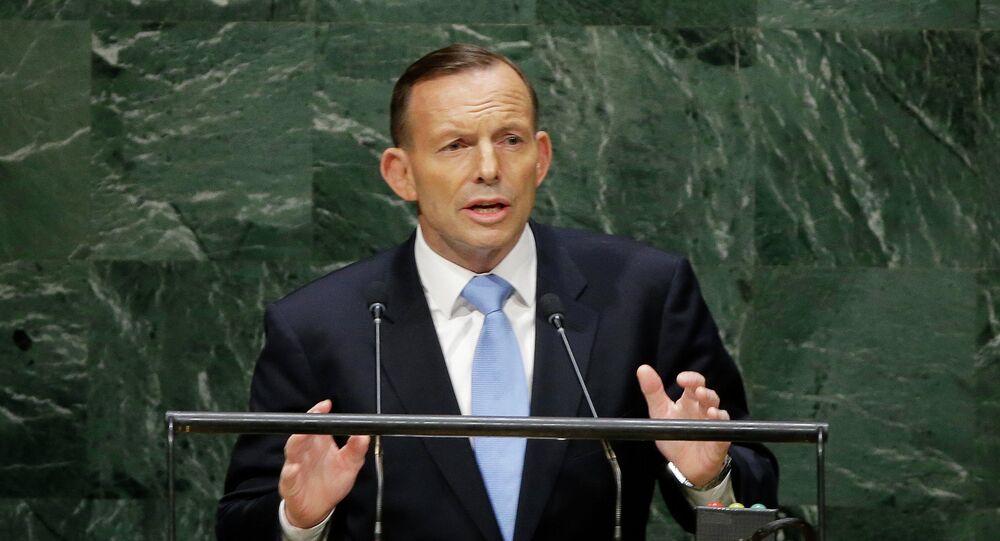 At a meeting with Russian President Vladimir Putin, Australian Prime Minister Tony Abbott did not "grill" the Russian leader over the tragic MH17 crash in eastern Ukraine, as expected, though the Australian will not hold back during the upcoming G20 Summit on his home soil.

CHICAGO, November 12 (RIA Novosti), Elizabeth Wojt – Russia-Australia relations are stable at the moment, but are likely to change in the near future as the investigation of the Malaysia Airlines plane crash continues, an expert on government and international relations told RIA Novosti Tuesday.

"They are cool on both sides, but are unlikely to remain so," senior lecturer on government and international relations at the University of Sydney, Dr. Peter John Chen, said.

On July 17, the Malaysia Airlines passenger plane en route from Amsterdam to Kuala Lumpur crashed in eastern Ukraine, killing all 298 people on board, including 28 Australians. The Kiev government accused militias in Ukraine's eastern regions of downing it but has not provided any evidence to support the claim. Local militia leaders have said that they do not have weapons capable of shooting down a plane flying at 32,000 feet.

The Russian President has insisted on an objective and thorough investigation into the Malaysian Boeing crash, also rebuffing Western claims that the crash site is under the control of independence supporters in eastern Ukraine, who are allegedly hampering investigative efforts.

Following increased pressure at home, Abbott promised in October to "shirtfront" Putin at a meeting on the margins of G20 Summit in Australia's Brisbane in November. The prime minister claimed he would initiate harsh discussions on the crash probe.

In Australian football, "shirtfront" refers to a trick when one player knocks another down in order to get control of the ball.

But no "harsh words" were exchanged at a Putin-Abbott surprise encounter on Tuesday at this year's Asia-Pacific Economic Cooperation (APEC) summit in Beijing, Putin's spokesman Dmitry Peskov has said.

"It looks like there was no attempt," Peskov said Tuesday when asked whether Abbott had managed to "shirtfront" the Russian president.

According to Peskov, the leaders agreed on the need to speed up the investigation into the crash. Abbott avoided heated discussions with Putin at the APEC summit because he was not in a position to force Russia to respond to his complaints, Chen said.

"While Australia [is] directly involved in APEC's formation, over time we have not been central to this forum. Thus, Australia tends to tread cautiously at APEC… This will be different when he is back on home soil," Chen told RIA Novosti.

Abbott is expected to take Russia-Australia talks further at the G20 summit on November 15-16 in Brisbane due to pressure from the Australian public.

In October, Australian Ambassador to Russia Paul Myler told RIA Novosti that Abbot hoped the meeting on the G20 margins would be "serious".

"While he has recently climbed down on this previously aggressive rhetoric, he will have to be able to demonstrate to the Australian public that he has maintained pressure on the Russian government. This is likely to take the form of continued Russian support for an investigation of the incident allowing both leaders to put the incident aside as maintaining it as a running sore is in neither's interests," Chen said.

Abbott's domestic rating has soared since July, and the G20 meeting with Putin will show if he is able to live up to expectations that Australians now have for their prime minister.

Relations between Russia and Australia soured after Canberra imposed several rounds of targeted sanctions against Moscow over its alleged role in the Ukrainian crisis. The crash of the Malaysian Boeing caused their relations to spiral further downward. In August, Russia retaliated with a one-year ban on Australian food imports, among other countries.

Abbott Hopes to Discuss Ukraine With Putin at G20 Summit