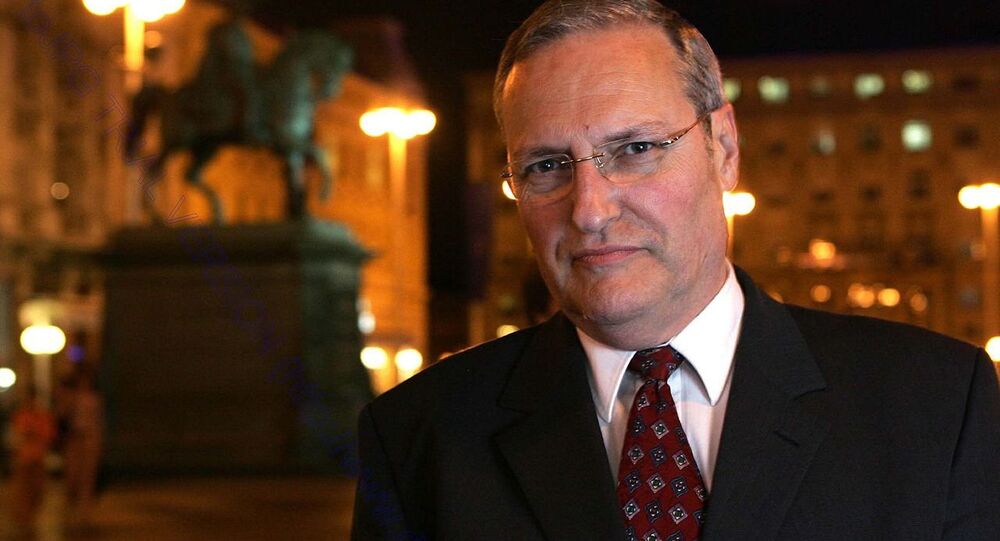 Dr. Efraim Zuroff, the Director of the Simon Wiesenthal Center in Israel, spoke with Radio VR about the recent AP report claiming dozens of Nazi criminals have received millions of dollars in US social security payments after being expelled out of the country, with the US government reasoning that this was the beat way to save money instead of carrying out costly deportation procedures.

MOSCOW, October 22 (RIA Novosti) - Dr. Efraim Zuroff, the Director of the Simon Wiesenthal Center in Israel, spoke with Radio VR about the recent AP report claiming dozens of Nazi criminals have received millions of dollars in US social security payments after being expelled out of the country, with the US government reasoning that this was the beat way to save   money instead of carrying out costly deportation procedures.

The social security payments the Nazi criminals received were part of a deal to allow the Nazis to voluntarily leave the US before the court would order them so. “The money that they’re getting is not the money that they stole from the Jewish people in Holocaust. This is the money that they paid into the US Social Security system when they were working in the United States”, Dr. Zuroff says. “By convincing those people to leave before they would be deported, the US saved millions of dollars because they avoided the lengthy legal proceedings that would have cost them a lot of money. The idea of Nazi criminals living comfortably at the expense of the American taxpayers is really shocking and outrageous, but it is not that shocking and outrageous as it seems on the headlines”.

The US was one of the principal destinations for Nazis after WWII, many Nazi war criminals were discovered in North America much later after the war. “The US has prosecuted more Nazi war criminals in the last 30-35 years than any other country”, Dr. Zuroff says. “But very few of them were put on trial. And this is precisely the problem. The Office of Special Investigations did what the law allowed them to do, which is to deport them”.

The special governmental agency, the Office of Special Investigations, came up with the scheme for how the US would rid itself of former Nazis without much financial loss from to deportation proceedings. “You have to understand that when it became revealed that among the millions of refugees who immigrated in the United States after WWII from Europe there was a considerable number of Nazi war collaborators, the US Department of Justice set up a special office, the Office of Special Investigations, in 1979 whose mandate was to take legal action against any Nazi war criminal residing in the United States. And those are the people who found these individuals”, the expert says.

Dr. Zuroff then describes the complicated legal procedure which applies to the discovered Nazi criminals. “When the discovery of the Nazis in the US happened, the Americans faced a very problematic legal dilemma. According to the American law, these people could not be prosecuted for the crimes they committed during the WWII, because the crimes were committed outside the United States, and the victims were not American citizens. As a result, the Americans who understand the problem and cannot ignore those people and let them live in their country, adopted a compromise on the dilemma which was: “We can’t prosecute them for their crimes, but we can prosecute them for lying on their immigration and naturalization applications”. This solution has bot its pros and cons. On the one hand it is  far easier to win immigration cases, as all you have to prove is that the person lied. You don’t have to prove that he or she committed murder for example as murder is a lot harder to prove, especially many years after the crime”.

These people were infrequently expelled by complete deportation, most of them were persuaded by American authorities to leave the country voluntarily, in return promising them their full Social Security payments till the end of their lives. This is how the legal ‘loophole’ was created  allowing Nazis live at the alleged expense of the US taxpayers.

At the same time, none of the Nazi criminals have faced tough punishment in the US, Dr. Zuroff continues. “The negative side to this is that the punishment which the Americans applied was denaturalization, taking away the American citizenship and then deporting them from the US was in many cases not an appropriate punishment, because some of the people were involved in serious war crimes, and simply kicking them out of the country was not a sufficient punishment”.

There is also another reason why even after being expelled, the former Nazis managed to avoid persecution. “None of the European counties, except for the Soviet Union maybe, was interested in prosecuting these people”, Dr. Zuroff argues. “So out of the 66 people who were forced to leave the US, only 10 were charged, only one was punished, Fyodor Fedorenko, who was Ukrainian and served as a guard at the infamous Treblinka deathcamp. And he was hanged by the Soviet authorities in 1987 after the trial in Crimea”.

Some of the alleged Nazi criminals were persons of special significance to the US, but the vast majority of them were not. They were just lucky enough to go in the hiding, Dr. Zuroff says.  “We have to divide those collaborators into several groups. Some of the people, for example, rocket scientists, and other people who Americans thought of using as spies, were knowingly brought to the US and given citizenship. But the majority of the Nazi war criminals who came to the US were admitted because of a combination of ignorance and apathy”, the expert notes.

What is also important is that general public in the US has remained largely indifferent to the issue of the hidden Nazis in their country, Dr. Zuroff says. “The public the US is divided into several parts regarding this question. Some of Americans are still outraged that Nazi criminals were allowed in the US, some have sympathy for them, and the majority does not know and they don’t really care. To the honor of the US, many good books have been published on the issue”.

The AP investigation published Monday has already drawn a lot of criticism to the actions of the US Department of Justice regarding the suspected Nazi criminals.