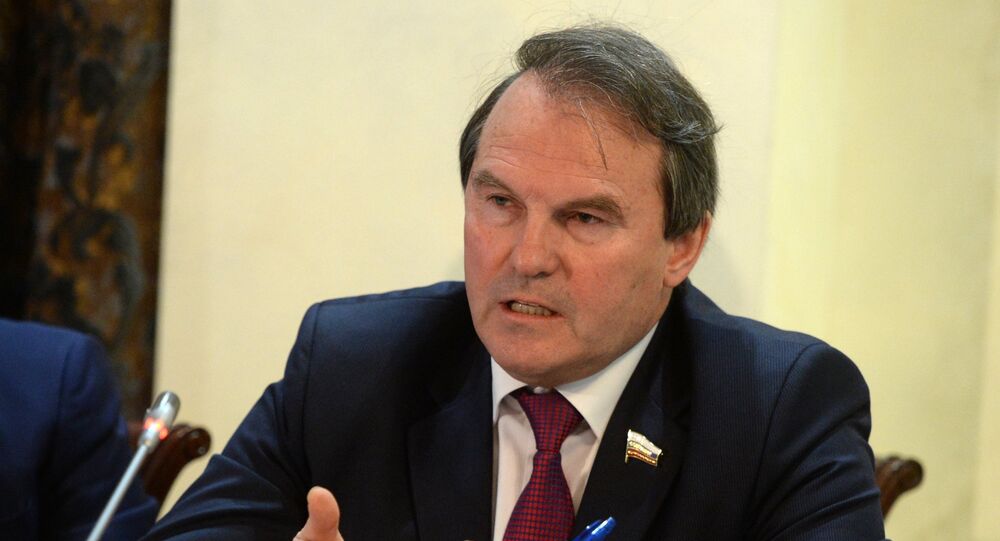 The conflict in Ukraine has gone well beyond the national boundaries and can now be called pan-European in scale and scope, experts from Russia and Germany agreed during a video conference on Wednesday.

MOSCOW, October 22 (RIA Novosti) — The conflict in Ukraine has gone well beyond the national boundaries and can now be called pan-European in scale and scope, experts from Russia and Germany agreed during a video conference on Wednesday.

"This is not an internally Ukrainian conflict, we now speak about pan-European peace order, basic definitions of applying principles of the international law," Wolfgang Richter, senior associate with the German Institute for International and Security Affairs said. "It is not in the interest of anyone to continue the confrontation," he added.

Igor Morozov, a member of the committee on international relations of the Federation Council, the upper house of Russian parliament, also believes that the situation in Ukraine is not an internal, but a European conflict. "In line with all the other models of revolutions that we have seen recently in the Middle East, in Georgia, here we saw an unconstitutional coup d'état on February 21, sponsored from outside," Morozov said, adding that those who sponsored this project "did not understand all the consequences of a military revolution."

"Now all these problems will automatically affect Europe, quality of life of European states' citizens," Morozov said referring to Ukraine's association agreement with the European Union.

In mid-April, Kiev launched a military operation against independence supporters in eastern Ukraine. Some 3,700 people have been killed and over 9,000 have sustained injuries since the beginning of the armed conflict, according to the latest UN estimates. On September 5, the conflicting sides agreed on a ceasefire at a meeting of the trilateral Contact Group on Ukraine in Minsk, but since then have been blaming each other for violating the truce.

As a result of the ongoing political crisis in the country, Ukraine is currently on the verge of a default.