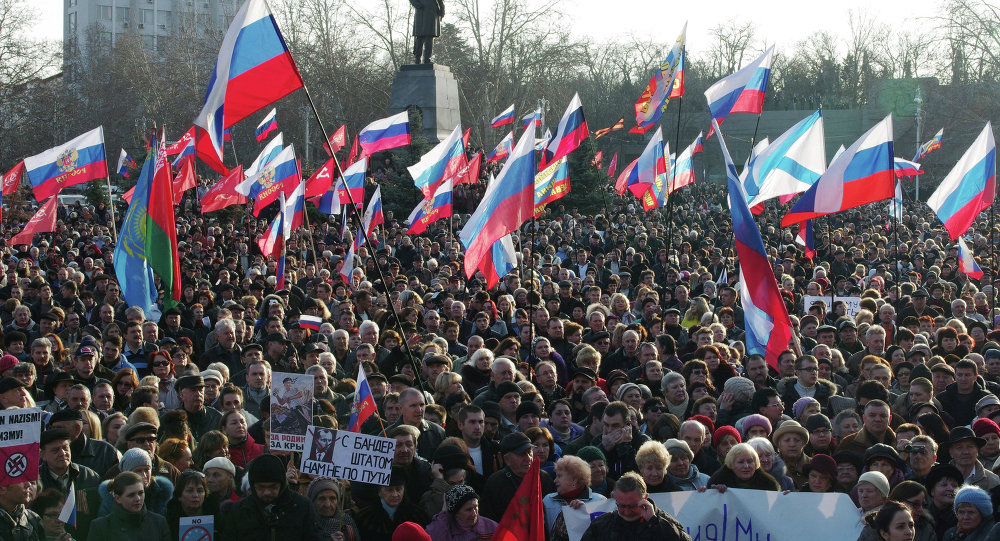 “A Russian mayor for a Russian town,” chanted the lively and irate crowd clogging the center of Sevastopol, a warm water port on the Black Sea. Except that Sevastopol is, in actual fact, in Ukraine.

SEVASTOPOL, February 25 (Howard Amos, RIA Novosti) – “A Russian mayor for a Russian town,” chanted the lively and irate crowd clogging the center of Sevastopol, a warm water port on the Black Sea.

Except that Sevastopol is, in actual fact, in Ukraine.

Since the opposition, much of whose ranks are occupied by unabashed Ukrainian nationalists, seized power, calls for secession have been spreading across the sprawling nation’s mainly Russian-speaking southern and eastern regions.

In Sevastopol on the Crimean peninsula, talk of greater autonomy turned to action Monday evening, when a throng numbering several thousand strong assembled outside the city hall.

Their first call was to demand that an extraordinary town council meeting recognize a local businessman with strong ties to Russia, Alexei Chaliy, as the city’s new mayor.

As some hotheads in the rabble threatened to storm the building, other waved Russian flags and brushed aside objections that Chaliy’s Russian citizenship made him ineligible for the job.

Before long, the announcement filtered through that Chaliy had been voted head of a new coordination council, and within a few minutes, he appeared at a second floor window to the cries of supporters.

In a move that smoothed the process, the former mayoral incumbent Vladimir Yatsuba had earlier tearfully announced his resignation, thereby paving the way for the Russian town to get its Russian leader.

The day’s events marked the first stages in the establishment of an anti-Kiev administration amid tumultuous development that will cause headaches for the group of politicians that have replaced the administration of ousted fugitive President Viktor Yanukovych.

Similar expressions of popular anger have taken place across southern and eastern Ukraine in recent days, but nowhere is dissatisfaction with the new regime greater than in Crimea, the Black Sea peninsula of two million people, which is the country’s only region with a majority ethnic Russian population.

Chaliy’s election, which has been widely covered by Kremlin-friendly media outlets in Russia, is unprecedented. Sevastopol has not elected a mayor by popular plebiscite since Kiev deprived it of that right in 1992.

Following up on their successful collective decision to install Chaliy as city head, the gathering in Sevastopol demanded that local security forces declare their allegiance to him and set up roadblocks to seal off the city.

Speculation, often feverish, has been rife that armed units are to be dispatched from western Ukraine to subjugate Crimea and bend them to Kiev’s will.

City police chief Alexander Goncharov, who went to Monday’s meeting to answer questions, said four roadblocks manned by armed officers would be set up around the city.

“If we receive criminal orders from Kiev, we will not carry them out,” he said, in what seemed like a qualified attempt at fence-sitting as the situation becomes clearer.

One of the people in the crowd, Fyodor, 26, a sailor from Sevastopol who travels around the world on merchant ships, echoed a common hope that Moscow could get involved.

“If there’s repression of Russians in Crimea then Russia will be forced to respond,” he said.

Alexandra, who declined to give her surname, called on Russian President Vladimir Putin to take direct action.

“Putin and the Black Sea fleet should come,” she said. “We are not scared of bloodshed.”

During Yanukovych’s tenure, which began in early 2010, Ukraine renewed Russia’s lease on the naval base in Sevastopol until 2042, cementing what was already a strong economic link between Moscow and the region.

On Sunday, there was a wave of large pro-Russian rallies in Crimea. Some estimates put the turnout in Sevastopol upward of 20,000, far larger than the impromptu throng of the following day. Speakers variously condemned the new government in Kiev as fascist and openly called for secession.

“We will not submit to the regime in Kiev,” Dmitry Sinichkin, president of the local branch of motorcycle club the Night Wolves told the crowd in Sevastopol.

The Night Wolves are closely linked to Russia’s political elite. Putin has visited the group in the city several times, on one occasion in 2010 riding a three-wheeled Harley Davidson alongside the bikers.

Rally-goers waved the Russian red, white and blue tricolor and yelled the football fan-style chant of “Ros-si-ya, Ros-si-ya, Ros-si-ya,” as they endorsed calls to create self-defense squads with police cooperation and withhold taxes from Kiev.

“Sevastopol is a Russian town and will always be a Russian town … we will never surrender to those fascists in Kiev,” said Anatoly, who was wearing a sweater bearing the logo of the United Russia party that dominates the political landscape in Ukraine’s eastern neighbor.

United Russia, he said, had signed a cooperation agreement with the Sevastopol Russian Community, a local society of which he was a member.

Purported moves in Moscow in recent years to push for granting Russian passports to ethnic Russians abroad has drawn fierce criticism from Kiev and sparked allegations of an attempted backdoor land grab.

While Putin had as of Tuesday refrained from making any public pronouncements on the unfolding situation, the Russian Foreign Ministry was more forthright in describing the acting government as gaining power through “dictatorial and sometimes terrorist methods.”

In remarks that hinted at possible future pressure from the Kremlin, Prime Minister Dmitry Medvedev expressed particular concern about Russians living in Ukraine.

Indeed, fears are rising that southern separatists will use the current crisis to provoke Russians into lending their muscle and peel Crimea away from Ukraine.

Some experts have raised the possibility of a scenario in which the peninsula becomes trapped in a frozen conflict and becomes wholly dependent on Russia, as has happened in other former Soviet nations such as Georgia, which lost control over the regions of Abkhazia and South Ossetia, in large part because of Moscow’s involvement.

“It’s easy to imagine that the Crimea calls a referendum and gets special status within the Ukraine,” said Masha Lipman, an analyst with the Carnegie Center in Moscow. “The natural next step would be to secede … and that could turn Ukraine into an unrecognized state like Abkhazia.”
Not all in Crimea back secession, however.

The local ethnic Tartar community, a mainly Muslim population that numbers about 250,000 people, has been vocal in support of the incoming government in Kiev. That adds a potentially explosive strand to the region’s ethnic mix of Russians and Ukrainians.

How the new regime in Kiev will act is also hard to predict.

Interim President Oleksandr Turchynov warned Tuesday that he recognized that separatism was a “serious threat” and said he would liaise with security forces on how to resolve the issue.

In statements that can only have served to sow alarm, leaders from the nationalist Svoboda party, which played a central role in the opposition’s ascent to power, reportedly said Monday that Russia was dispatching extra naval forces to Crimea.

In Sevastopol, Viktor Neganov, an advisor to acting Interior Minister, told RIA Novosti that the new government was for now trying to settle the situation without the use of force.

But Neganov warned that what Chaliy is doing in the city amounts to a local coup.

“If he stays, he will go to jail as a traitor to the state,” he said.