As throngs of Olympic tourists dragging heavy suitcases rushed to airports and train stations on Monday, Sochi reassumed its role of a small resort city glistening by the sea - a bit bedraggled, but bursting with pride over its handling of the Winter Games.

SOCHI, February 24 (Kristen Blyth and Alexandra Odynova, RIA Novosti) – As throngs of Olympic tourists dragging heavy suitcases rushed to airports and train stations on Monday, Sochi reassumed its role of a small resort city glistening by the sea - a bit bedraggled, but bursting with pride over its handling of the Winter Games.

“I have chills down my spine from ecstasy,” said Valentina Podalevskaya, a pensioner from Ukraine’s Black Sea region of Crimea, who was visiting Sochi for the first time to see the Games. “I’m delighted with Russia. [President Vladimir] Putin handled everything excellently.”

The city’s coastal promenade along the Black Sea – packed for the last month with scampering children and bustling visitors brandishing plastic spectator passes – has regained a lazy, contemplative air.

© RIA Novosti . Alexey Maishev
A beach in Sochi with an Olympic slogan in the background

The few remaining tourists strolling along the seafront Monday morning expressed weariness, but also satisfaction with Sochi’s performance. For some Russians, the Games were a point of exuberant national pride.

“Our Russia won,” Gennady Ivanov, a tourist from the western city of Velikiye Luki, told RIA Novosti. “I can’t explain it – you have to see it with your own eyes. We in Russia can build anything and do everything.”

Foreign visitors, for their part, expressed pleasant surprise – almost disbelief – at what they said was a resoundingly hospitable reception.

“It’s been a long three weeks,” said Neil Smithies, a Canadian visiting with his wife, Kayla. “But when you get out on the [event] grounds and everyone’s giving you high fives, it’s pretty fun.”

Michael Tooke, another tourist visiting from Hawaii with his wife, Darcy, and two daughters aged 4 and 5, said his “mind has just exploded with how amazingly nice everyone has been.”

“I expected them [Russians] to be stoic, but they welcomed us with open arms,” he said.

Tooke packed over 2,000 traditional Hawaiian shell necklaces, called leis, for his daughters to hand out to strangers at the Games and said he was staggered by the kindnesses people had offered in return.

He related a series of astounding anecdotes about Russian hospitality that his family had experienced in Sochi over the last three weeks, including being named the guests of honor at a local restaurant and being given 30,000 rubles (almost $900) by a stranger after Tooke’s daughter gave him a lei. 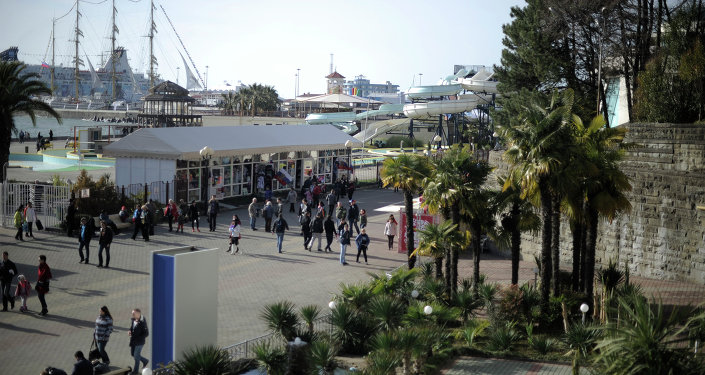 Among locals, who have witnessed seven years of frenetic construction to get Sochi ready for the Games, several were cooler about their Olympic experience.

“It’s a shame that they’ve put up so many high-rise buildings. They spoil the look,” complained Leonid Dryanichev, a local pensioner strolling hand-in-hand with his wife on Monday.

Dryanichev said that dealing with the dirt, noise and detours involved in large-scale construction was difficult for Sochi residents.

Still, he admitted that he appreciated some renovations – like a revamping of the city pier area along the Black Sea – and enjoyed Sunday’s closing ceremony.

“It cost insane money, but one has to pay for beautiful things,” his wife, Raisa, said.

For now, the Olympic Park – which played host to over 2 million people over the course of the main events – is closed for preparations for the Paralympic Games, scheduled to open March 7.

Sochi is also set to host an international Group of 8 summit in June, followed by the Formula One Grand Prix race in October, though questions about the city's long-term integration of its hyper-expanded infrastructure remain.

But concerns about what will later become of Sochi’s towering stadiums and numerous now-empty hotels didn’t appear to vex local vendors, who seemed to still be basking in the Olympic glow.

“We only benefitted from them [the Games],” said Svetlana Panasyeva, a consultant at a souvenir shop near Sochi’s beach. “We hope that after the explosion of people it will all be normal again, but we ourselves are waiting to find out what will happen. We hope that everything will be OK.”