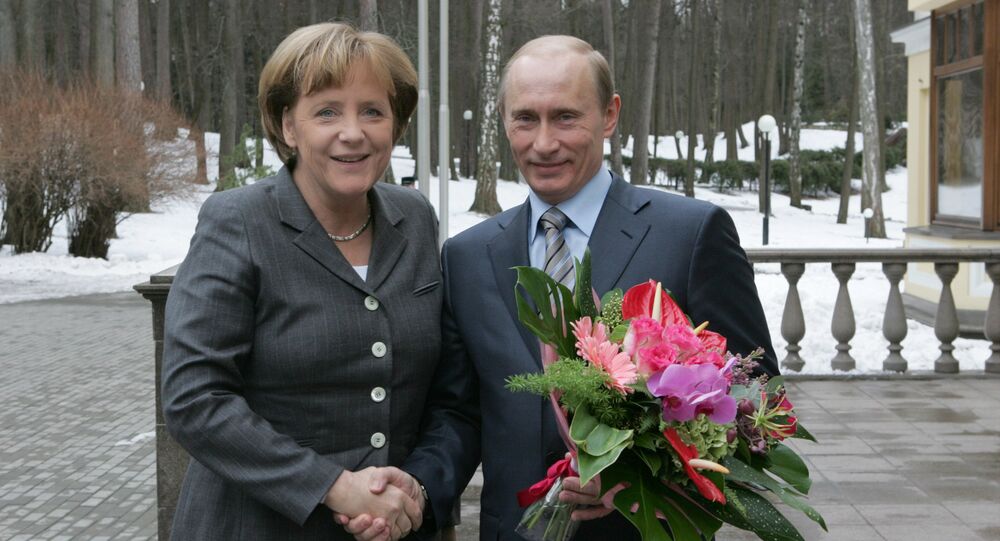 Russian Prime Minister Vladimir Putin is in Germany once again, for a meeting with Chancellor Angela Merkel. His working visit will last two days: November 25-26. The entire European Union (EU) and the rest of Europe are watching this visit particularly closely. This is always the case when Moscow and Berlin are planning to redesign the architecture of Europe.

Russian Prime Minister Vladimir Putin is in Germany once again, for a meeting with Chancellor Angela Merkel. His working visit will last two days: November 25-26. The entire European Union (EU) and the rest of Europe are watching this visit particularly closely. This is always the case when Moscow and Berlin are planning to redesign the architecture of Europe. Now Europe is paying additional attention to Putin's visit because the Euro is ailing and virtually all EU member states are in the grips of the financial crisis while Germany remains the only one in recovery.

The agenda for their talks is interesting indeed. Putin and Frau Chancellor will discuss construction work on Nord Stream (half the gas pipeline - 699 km - has been laid to date), the volume of gas supplies to Germany and the EU (France, Denmark and the Netherlands are already discussing an increase), Russia's accession to the World Trade Organization (WTO), a new EU-Russia partnership treaty and bringing the introduction of visa-free travel forward.

Finally, the two leaders need to shed light on relations between the German energy giant, E.ON Ruhrgas and Russia's Gazprom. E.ON Ruhrgas has a 15.5% stake in Nord Stream and owns 3.5% of the shares in Gazprom. There were reports that E.ON Ruhrgas was planning to sell its share for $4-4.4 billion. It is going through a difficult patch and needs cash. The question is who should it sell to: Gazprom, Russia's VTB Bank or some other company. It also has to decide whether to sell at all, or whether there are other options. This is yet another issue that requires high-level resolution.

In any event, E.ON Ruhrgas is not planning to abandon Nord Stream or renounce its role as Germany's main gas buyer. All these rumors about its split from Gazprom (for the time being E.ON Ruhrgas is refusing to comment on them) seem somewhat strange. Market experts' understanding is that Gazprom shares could see between 30% and 50% growth, so selling shares in it now would not be very far-sighted.

The European corridor into the WTO

A couple of days before Putin's visit, Moscow and the EU finally agreed the terms of Russia's WTO entry. This is a goal Russia has spent 17 years pursuing: since 1993 when it officially applied for WTO accession. Merkel and Putin have yet to agree the details regarding the "the lines of conduct." Officially, "the European corridor" will open at the EU-Russia summit in Brussels on December 7. Russia reached a similar agreement with the United States in September. It has now overcome the two main barriers that prevented it from joining the world's main trade club.

Any of the WTO's 153 members have the right to veto the entry of a new applicant. Georgia has thus far withheld its signature. Berlin stands to gain by "persuading" Tbilisi to change its position because WTO membership simplifies trade and relations with the world's energy and raw materials' superpower.

On the eve of his visit, Putin wrote an article for Suedeutsche Zeitung, a major German newspaper known for its liberal economic views.

From Lisbon to Vladivostok: Europe's Economy

These blueprints contain five major points: 1. Forming a harmonious economic community stretching from Lisbon to Vladivostok; 2. A common industrial policy based on the integration of Russia's and the EU's technological and resource potentials; 3. Developing equitable and balanced relations between energy suppliers, consumers and transit countries. This is in fact the gist of the new energy treaty that Russia proposed; 4. Putting European science and education in a leading position through close partnership; 5. Eliminating visa requirements as the first step towards the real integration of Russia and the EU, rather than leaving it till last.

This plan is so immense and innovative that it will be some time before Europe embraces it. At any rate, Russia's vision for how its cooperation with the EU should develop is now clear.

Germany is the most convenient place for introducing these new ideas regarding economic architecture. The stars are aligned in such a way (the financial downturn, Greece, Ireland, Portugal, Spain and Italy all on the brink of bankruptcy) that Merkel is herself mulling this very issue. Only she views it on a purely EU-wide scale rather than as something stretching from Lisbon to Vladivostok. Berlin intends to oversee a strict tightening of financial discipline within the EU. This is no Teutonic whim, it is a dire necessity. Without it the Euro will perish and Berlin may be left to chart its own course: towards Russia and China.