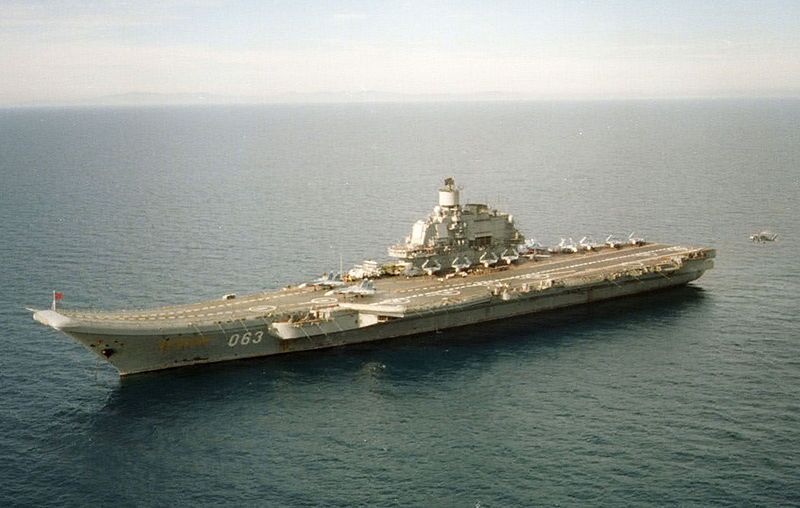 Originally laid as the Leonid Brezhnev in 1982, launched as the Riga in 1985 and renamed as the Tbilisi in 1987, the warship received her current name in 1990. Western analysts call her a ship of a thousand names.

The Admiral Kuznetsov entered service with the Russian Navy in 1991 and was used for the operation of deck aircraft, the development of new tactics, including those for dealing with carriers of theoretical enemies.

In the late 1990s and the early 2000s, it was repeatedly proposed that the Admiral Kuznetsov, which remained moored for long time periods, be decommissioned and sold for scrap.

However, an improved situation in the country gave the ship a new lease of life. Her propulsion unit and other equipment were repaired, and she started taking part in various high seas war games more often.

In the mid-2000s, Navy representatives and Russian political leaders once again started speaking of the need to build aircraft carriers for the Navy. Moscow decided to preserve the Admiral Kuznetsov, used to train deck aircraft pilots.

The upcoming large-scale modernization was motivated by the need to eliminate the ship's inherent drawbacks and to repair some of her units. Plans for docking the ship in 2010-2012 were discussed more frequently and have now been confirmed.

Although it is hard to assess the revamped carrier's specifications, her future appearance can be predicted on the basis of available reports.

First of all, the defective propulsion unit comprising steam turbines and turbo-pressurized boilers will be replaced either with a gas-turbine or nuclear propulsion unit.

The ship's 3M45 P-700 Granit (SS-N-19 Shipwreck) anti-ship cruise-missile launchers will be dismantled, and her internal layout changed. Consequently, the hangar area will be expanded to 4,500-5,000 sq. m. for storing additional fixed-wing aircraft.

The new weapons systems will feature state-of-the-art radio-electronic equipment, probably including the standard Sigma combat information and control system, due to be installed on all new generation Russian warships. The system facilitates unprecedentedly effective cooperation between task force elements.

The carrier will also receive aircraft catapults, a logical option. Considering the fact that her ski-jump will remain intact, one or two catapults can be located on the angled flight deck.

A similar engineering solution was envisioned for the incomplete Ulyanovsk super-carrier, whose keel was laid down in 1988, but the project was cancelled when it was 40% complete along with a sister ship in 1991 after the end of the Cold War.

By that time, the Soviet Union had developed steam catapults and tested an experimental version at the ground-based NITKA training facility incorporating a ski-jump and deck arrestor. Consequently, this task is feasible.

The carrier's air wing is to comprise 26 new Mikoyan-Gurevich MiG-29K Fulcrum-D multi-role fighter aircraft, helicopters and navalized Sukhoi T-50 PAK FA (Future Frontline Aircraft System) fifth-generation fighters, currently under development. It appears that 15-20 of these aircraft will be built pending the ship's re-launching, which is likely to take place in 2020 rather than 2017.