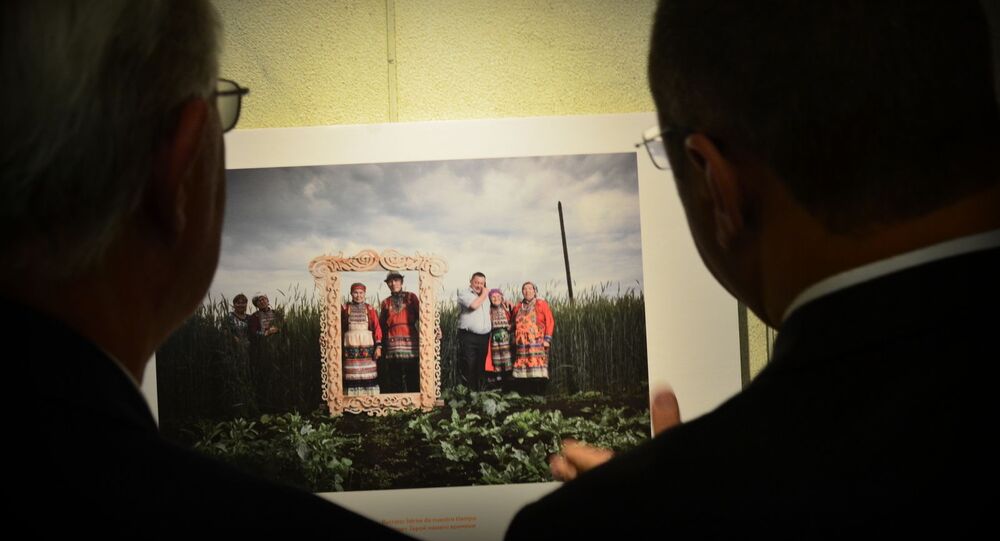 MONTEVIDEO (Sputnik) - The exhibition of more than 30 photographs by the finalists of the 2018 Andrei Stenin International Press Photo Contest has opened in the Uruguayan capital of Montevideo at the parliament building.

The opening ceremony was held on Wednesday, and the exhibition will be open until June 25.

The visitors can now look at the prize-winning snapshots, whose photographers represent such countries as India, Iraq, Italy, Russia, Spain, Turkey and others.

The exhibition is organized with support from the Uruguayan Press Association (APU), Russian Embassy in Uruguay, and Russian Federal Agency for the Commonwealth of Independent States, Compatriots Living Abroad and International Humanitarian Cooperation.

Speaking at the opening ceremony, Ruben Martinez Huelmo, the deputy chairman of the Uruguayan upper chamber's education and culture commission and a member of the Uruguay-Russia interparliamentary friendship group, said that the exhibition was "a great privilege for Uruguay and a great honour for the country's parliament."

"We want to increase the number of visitors who will be able to see this exhibition, we want to bring photography students and public school students to [the exhibition]", the lawmaker added.

The exhibition opened in the parliament's gallery called "The Road of Democracy," through which the members of the upper chamber and journalists working in parliament pass every day.

"Young photographers' photos show exactly their vision of the world. This is a new generation of photographers, their new vision, and this vision is very promising", Counselor at the Russian embassy in Uruguay Viktor Popovich said.

The works showcased at the exhibition vary greatly, reflecting the multifaceted nature of our life. Visitors can see everything from a firefighter battling with fire in South Africa to a nomadic child migrating with his family in Russia's Siberia to youngsters cheerfully playing football in Cuba to a teenager being held at a gunpoint in South Africa and much more.

But it was the story of an Iraqi boy named Qassem Qadim, which made headlines after a photo of him took first prize in the sports nomination of the 2018 Stenin photo contest, that caught everyone's attention.

Thanks to Iraqi photographer Taisir Mahdi, the whole world learned about Qadim, who, despite losing his leg after stepping on a land mine, still enjoys playing football with his peers with the help of crutches.

Rossiya Segodnya International Information Agency, the organizer of the contest, invited Qadim to visit the Russian capital for his birthday in mid-May. After the visit, the charity foundation of the Spartak Moscow Football Club offered to fully cover the costs for making a prosthesis for the boy.

The contest is named after Rossiya Segodnya photojournalist Andrei Stenin, who was killed while covering the conflict in the east of Ukraine in 2014.

The main goal of the contest, organized under the aegis of the Commission of Russia for the United Nations Educational, Scientific and Cultural Organization, is to support young photographers, aged between 18 and 33, and draw public attention to the challenges of modern photojournalism.

In 2019, the general information partners of the contest include the Russian news website Vesti.Ru and Rossiya-Kultura TV channel.