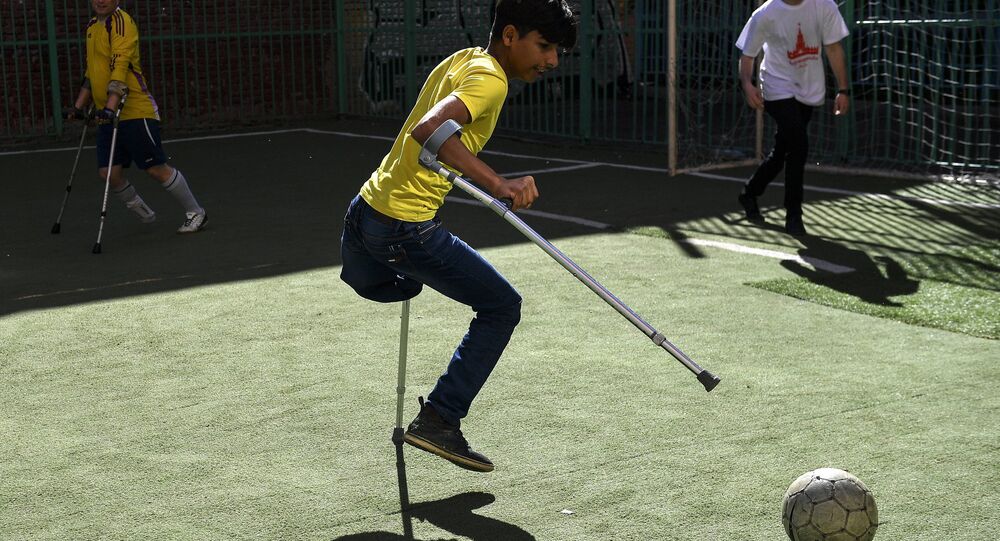 MOSCOW (Sputnik) - A charity foundation for children of the Russian Spartak football club will take charge of the costs of replacing a missing leg of Iraqi boy Qassem Qadim, a hero of an award-winning photo of the 2018 Andrei Stenin International Press Photo Contest, with a prosthesis, the charity's chairman Andrey Fedun said.

Thirteen-year-old Qassem was captured on the photo by photographer Taisir Mahdi, titled "Desire for Life," that won gold in the contest's Sports category. The picture shows Qassem, who lost his leg in a terrorist attack, playing football with his friends. The boy visited Moscow earlier this month and will apparently return in June for the prosthetics.

"Good deeds, like sports, have no limits. Our young fund provides assistance to children from different regions, we have an opportunity to help Qassem, we are ready to take charge of the costs of the prosthetics. Moreover, doctors' forecasts are quite optimistic", Fedun said.

© Sputnik / Ramil Sitdikov
WATCH Iraqi Boy Famous for Stenin Contest Arrive in Moscow for Treatment
During his visit to Moscow earlier in May, Qassem was examined at the Moscow Institute of Emergency Children's Surgery and Traumatology, which has developed a treatment plan for the boy. The prosthesis will be made at the Russian bureau of the prosthetics company Ottobock.

The Andrei Stenin International Press Photo Contest was launched by Rossiya Segodnya under the aegis of the Russian Commission for UNESCO. Its main goal is to support young photographers, aged between 18 and 33, and draw public attention to the challenges of modern photojournalism.