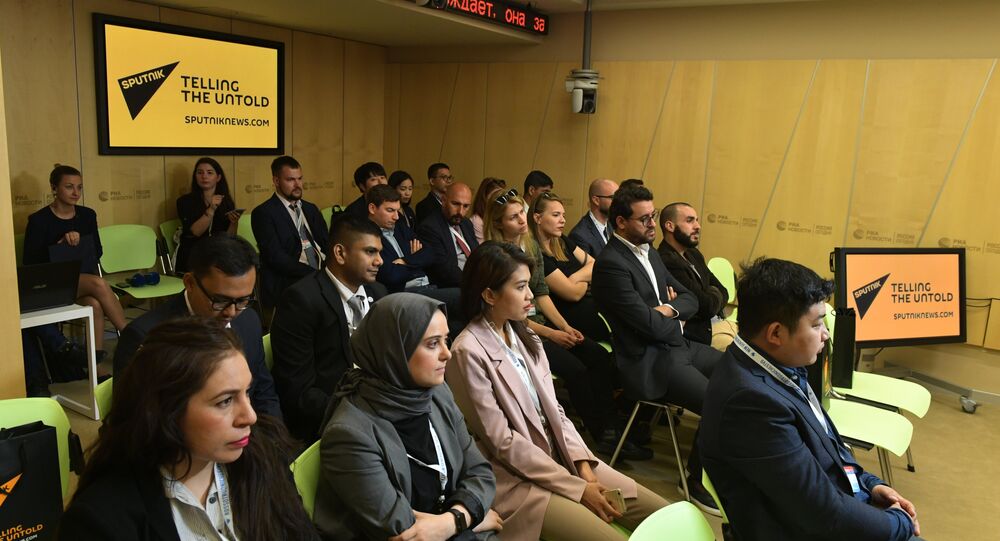 MOSCOW – Sputnik press service. Sputnik News and Radio is welcoming another group of participants to the SputnikPro project.

This time, media specialists from 17 countries are taking part in the Moscow session, including representatives of well-known media outlets such as the Maeil Business Newspaper (South Korea), the Press Trust of India (India) and Notimex (Mexico) information agencies, Renmin (China), as well as the Echoroukonline (Algeria) and Masrawy (Egypt) portals.

For three days, leading experts from Sputnik will tell the audience about the principles of modern international multimedia, as well as the main trends in the development of the information space and the needs of the audience in the modern world.

In addition, the agency's guests will visit the Russian Ministry of Foreign Affairs and the Federation Council of the Federal Assembly.

"We are pleased that young journalists from many countries are meeting in Moscow at our project. The dialogue between media professionals is very important for the development of modern media, and we hope that the SputnikPro participants will gain experience that will be useful to them in the future", Anton Anisimov, Sputnik's deputy editor-in-chief, said.

"It's more than exciting to be invited to such a programme organised by a major media outlet like Sputnik, and getting the chance to meet colleagues from all over the world. In Greece, we don't often have the opportunity to meet Russian journalists, so it's a great occasion for me to get to know more about your culture and, more importantly, your perception of journalism. We are lucky to be living in the digital era, where communication is simplified; however, there are too many challenges ahead, especially in our profession. I think that a good response to this is having international programmes that contribute to the exchange of ideas and ways of thinking", Greek journalist Danai Maragoudaki said.

Nguyen Bao Thanh from Vietnam's VnExpress newspaper shared his impressions of the project:

"As a journalist, I've long studied about Russia, a country of rich culture, long history, and hospitable people. When I was young, I dreamed of travelling to Russia, a friend of Vietnam, but my dream has not come true yet. I think SputnikPro will be a precious chance for me to live up my dream, to learn more about the country and people of Russia. I hope that we will harvest lots of useful information and knowledge from the programme".

"As a journalist closely following international affairs and media, I believe this training opportunity offers great insight into Russian media, which is why I expect to hear about the information/communication system. I'm hoping to have smart exchanges with people of different expertise related to my field. Last but not least, I am really excited to visit Moscow, one of the most important and great capitals of the world", Mohammad Al Sabbah from Egypt's Masrawy website said.

Lucia Tadeo Sanchez form Mexico (Notimex) believes that "this event will enrich our future career as it will let us share our knowledge and information about the work we do and how we can improve it".

"For me, it's a real honour to have this opportunity to share my ideas and experience and as well as to visit Russia, a country as culturally rich as my country, Mexico, is", she said.

Earlier, within the framework of SputnikPro, an in-person session for journalists from the CIS and Baltic countries was held in Moscow. The modules of this project for foreign journalists are being implemented with the assistance of the New Generation programme of the Federal Agency for the Commonwealth of the Independent States, compatriots living abroad, and international humanitarian cooperation (Rossotrudnichestvo).

During the project's implementation in various formats, representatives of more than 80 countries took part in it. Full-time SputnikPro workshops have been held in Abkhazia, Azerbaijan, Armenia, Belarus, Greece, Georgia, India, Kyrgyzstan, Turkey, Estonia, and South Ossetia.

Sputnik is one of the largest international media outlets, combining national and regional multimedia websites in 32 languages, analogue and digital broadcasting in Russian, English, French, and other languages in more than 90 cities around the world and on the Internet. Day and night, Sputnik newsfeeds provide information to the world's leading outlets in English, Arabic, Spanish, Chinese, and Farsi.

Sputnik's audience exceeds 60 million visitors per month; the number of subscribers to Sputnik China on the Weibo social network is more than 10 million. Over a thousand people of dozens of nationalities work in 22 editorial centres around the world, from Beijing to Montevideo. Sputnik is part of the Rossiya Segodnya media group. Sputnik's headquarters is based in Moscow.