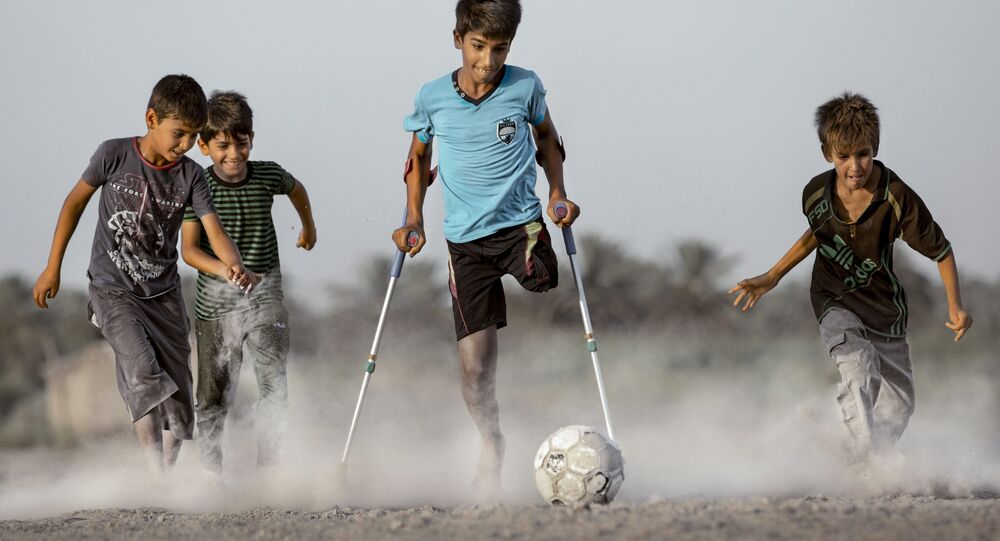 Thanks to Taisir Mahdi, the author of the photograph, the young football player who stands up to his peers in spite of having lost his leg has become famous all over the world. His cheerfulness, motivation and resilience for overcoming difficulties could not but touch people's hearts and raise desire to help. Thus, the organizer of the Andrei Stenin International Press Photo Contest, the Rossiya Segodnya International Information Agency, has invited the young football player to pay a visit to the Russian capital on the eve of his birthday.

The boy will spend a week in Moscow. During his stay, he will go sightseeing and will also attend a football match. With support of Spartak Moscow football club and its charity fund, the foundation for assistance to science, education, culture and sports development "Spartak for Kids," the Iraqi boy will attend a Russian Premier League match between Spartak and Ufa football club on Sunday. He will also visit Spartak's multimedia museum located at the Otkritie Arena stadium.

It was the spokeswoman of the Russian Foreign Ministry, Maria Zakharova, who came up with the idea to invite "the boy from the photo" to Moscow back in November 2018, at the award ceremony for the winners of the Andrei Stenin International Press Photo Contest.

"I believe you should find this boy and we should invite him to Moscow… This boy and the way he looks at the ball — he really deserves coming here," Zakharova told Mahdi in her stage address.

"We'll find him, we'll bring him [to Russia], we'll show him the country and we'll definitely take him to a cool football match. We will also try to help him receive medical treatment from our doctors and get a prosthesis," Simonyan wrote in her Telegram channel back then.

© CC BY 2.0 / Deutscher Webvideopreis / Manche Videocamper haben auch ihre Filmausrüstung mitgebracht
Andrei Stenin Photo Contest 2019 Sets Record Gathering Participants From 80 Countries
The Andrei Stenin International Press Photo Contest was launched by Rossiya Segodnya under the aegis of the Russian Commission for UNESCO. Its main goal is to support young photographers, aged between 18 and 33, and draw public attention to the challenges of modern photojournalism. This contest is a platform for young photographers: talented, empathetic and open-minded, they draw our attention to people and events around us. Around 6,000 photos by authors from 80 countries took part in the 2018 edition of the contest.

Rossiya Segodnya is a multimedia international news and information agency with a mission to provide prompt and balanced coverage of global news and inform international audiences about different views on key events. It comprises RIA Novosti, R-Sport, RIA Real Estate, RIA Rating, Prime, InoSMI, and is represented abroad by the Sputnik news agency.