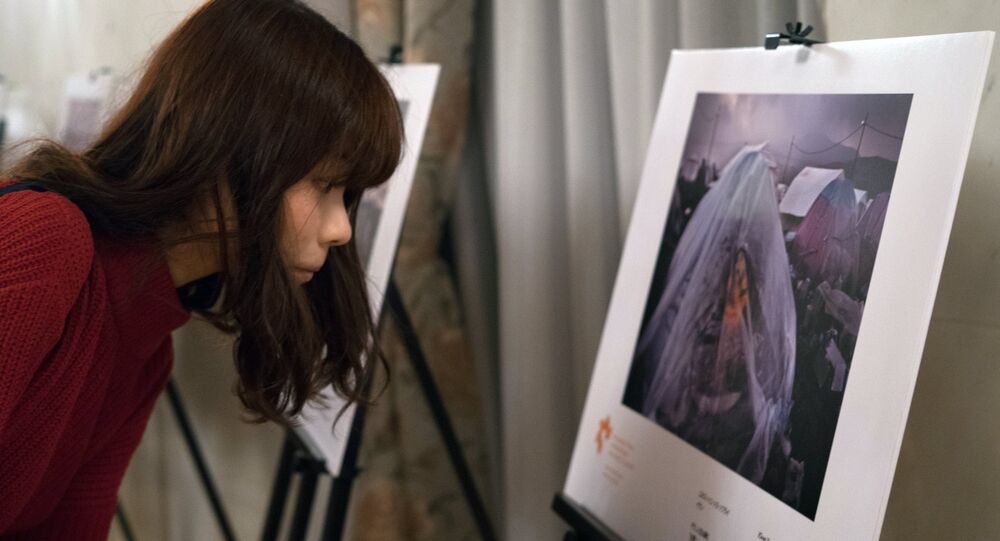 MOSCOW (Sputnik) - An exhibition of photos by winners of the Andrei Stenin International Press Photo Contest opened in Tokyo on Tuesday.

The exhibition hosted by the Russian Embassy in Japan includes 30 photos selected from 6,000 works by photographers from 77 countries. The event was organized by Rossiya Segodnya International Information Agency with the help of the embassy.

Rossiya Segodnya's deputy editor in chief Yelena Chepurnykh remarked at the exhibition opening that the number of participants was growing every year.

"We try to show this exhibition to as many people as possible in many countries. It was in South Africa, Argentina, Belgium, France, China," Chepurnykh said.

© Sputnik /
Reporters From Bhutan, Yemen and Sudan Apply for Stenin Contest for the First Time
Russian Ambassador to Japan Mikhail Galuzin thanked Rossiya Segodnya for the idea to hold the exhibition.

"I think that the exhibition was successful and it helped make Andrei Stenin Contest more popular and further strengthen friendship and mutual understanding between Russia and Japan," the ambassador said.

Stella Sivakova, a professor at Soka University, brought Japanese students and professors to the exhibition.

"The young Japanese were very impressed by the fact that young photographers were in the places where there were military campaigns, earthquakes, they were not scared and they took risks," Sivakova said.

© Sputnik /
Andrei Stenin Contest African Tour Continues in Johannesburg
For instance, a photo by Justin Sullivan, Stand Off, shows a police officer pointing his gun at three people hiding under the table. Luis Tato's series documents the unrest in Kenya after the election.

The exhibition was shown at the UN headquarters on November 2, the International Day to End Impunity for Crimes Against Journalists.

The Andrei Stenin International Press Photo Contest was launched by Rossiya Segodnya under the aegis of the Russian Commission for UNESCO. Its key objective is to support young photographers and draw public attention to the challenges of modern photojournalism. The contest celebrates the work of talented and open-minded photographers, whose works captivate viewers' imagination.