Sputnik has brought together two highly experienced journalists and commentators from opposite ends of the political spectrum to launch a new hard-hitting current affairs debate show on Radio Sputnik. 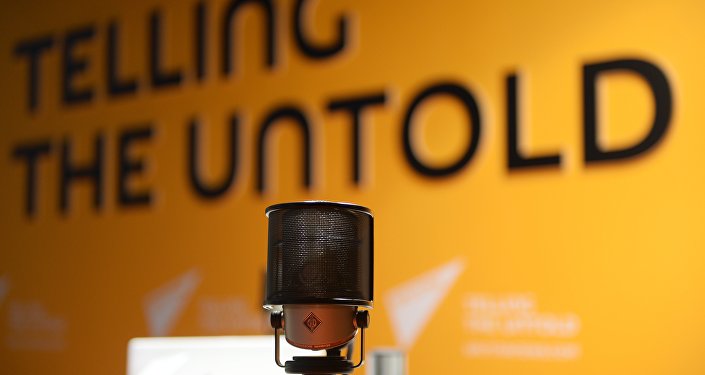 © Sputnik / Konstantin Chalabov
Radio Sputnik Awarded With UNESCO Diploma
WASHINGTON DC, 18th April 2017, Sputnik US Press Office – Lee Stranahan, a conservative Republican and former lead investigative reporter at Breitbart News, and Garland Nixon, a progressive Democrat, former police officer, and National Board member of the American Civil Liberties Union (ACLU), will co-host ‘Fault Lines with Nixon and Stranahan’. The program, which is produced and broadcast from Sputnik’s Washington DC studio, is available online at the Sputnik website and also on FM 103.5 on HD2 radio in the DC area.

The brand new Sputnik show, which airs weekdays, aims to help its audience think more deeply about the issues raised by offering them both the liberal and conservative viewpoints and encouraging them to draw their own conclusions. The show has already received very positive feedback from listeners who have praised the hosts for their willingness to hear the other’s view and for their skills as investigative reporters.

Commenting, Lee Stranahan said: “I love doing radio, which I believe is one of the best platforms for me to present the investigative journalism that I’m known for. Sputnik offered me a great platform – five days a week, available around the world online and on Washington, DC-area radio, as well as a great co-host, Garland Nixon.”

“I chose to come to Radio Sputnik because it allows me to pursue my interests and express my deeply held beliefs without the constraints of the traditional commercial media. I hope to expose our listeners to progressive social and political positions in way that is both entertaining and enlightening,” Garland Nixon added.

Despite holding vastly different political views and advocating sharply contrasting opinions, both Stranahan and Nixon remain civil and collegial with one another, proving that a difference in point of view does not mean that people cannot get on with one another. The hosts, as well as Sputnik more broadly, hope that their working relationship will be an example for people to follow, especially given the lack of courtesy and friendliness in the modern political and media landscape.

‘Fault Lines’ is the latest addition to the growing roster of Sputnik US programming which includes homegrown talent such as ‘The Bradcast’ and ‘Trendstorm’ as well as syndicated shows such as the ‘Thom Hartmann Program.’

More information about the launch of ‘Fault Lines’ can be found here: https://sputniknews.com/us/201704051052336325-lee-stranahan-garland-nixon-sputnik-radio/

Previous episodes of the show can be found here: https://sputniknews.com/radio_fault_lines/