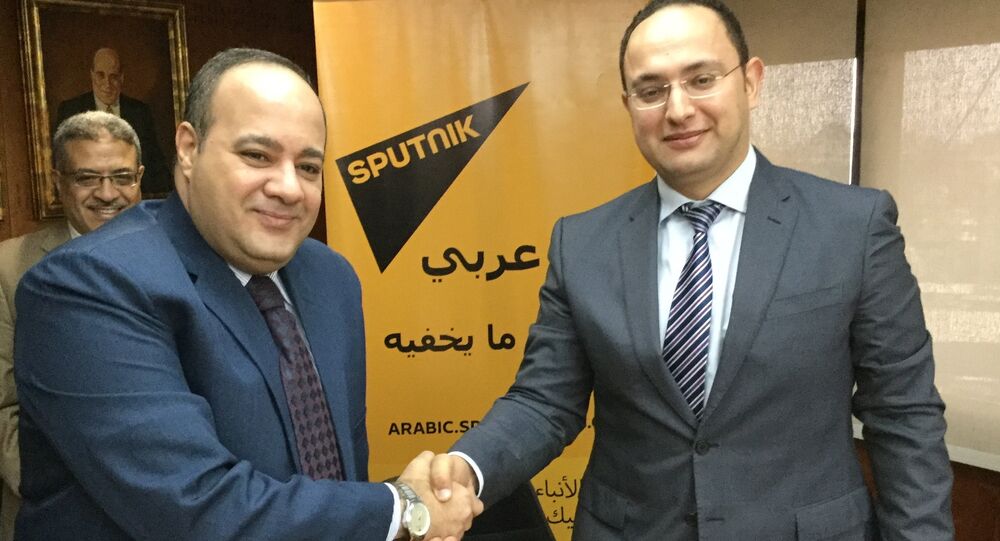 CAIRO (Sputnik Press Service) — The portal is part of the publishing house of the same name and is one of the largest in Egypt. The signing ceremony at the company's headquarters in Cairo was attended by Editorial General Secretary of Akhbar Al-Youm Ahmad Galal, the internet portal's Editor-in-Chief Alaa Abd Elhadi, and Head of the Sputnik Arabic news agency and radio Nadim Zuaui.

© Sputnik /
Ankara Lifts Ban on Sputnik Turkey
The agreement aims to develop professional cooperation and information exchange on a broad range of topics, including bilateral relations between Russia and Egypt, as well as creating a number of joint media projects.

The internet portal's Editor-in-Chief Akhbar Al-Youm Alaa Abd Elhadi said: "The West controlled the media for a long time and we are happy to cooperate with the Sputnik news agency, which will help us see other aspects of the truth."

Head of Sputnik Arabic news agency and radio Nadim Zuaui said: "Sputnik Arabic is glad to promote cooperation with such an influential and professional resource as Akhbar Al-Youm. This cooperation offers new opportunities for us to grow our audience in Egypt and the rest of the Arab world. It will also help us cover more news in Egypt and the rest of the Middle East."

The Akhbar Al-Youm internet portal is one of the world's largest Arab-speaking online resources. It was founded by the Akhbar Al-Youm Publishing House in 2011. The portal carries the latest news in Arabic and real-time photo and video materials for different platforms, including mobile devices. It operates round the clock, reporting on politics, the economy, society, culture and other topics.

Sputnik (sputniknews.com) is a news agency and radio network with multimedia news hubs in dozens of countries. Sputnik broadcasts through its websites in over 30 languages, as well as analogue and digital radio, mobile apps, and social media. Sputnik newswires, available by subscription, run around the clock in English, Arabic, Spanish and Chinese.