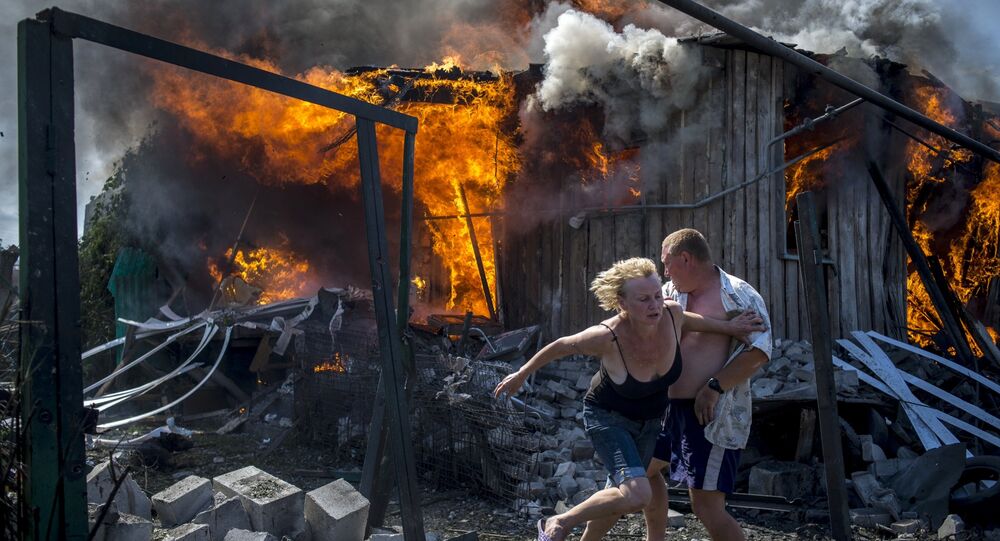 Moscow (Sputnik Press-Office) — Photographers from 127 countries entered the competition. Melnikov was declared the winner in the Photojournalism category for his work 'At the last second', created in south-east Ukraine.

The picture was taken on July 2nd 2014. The photograph shows residents of the village of Lugansk fleeing from an airstrike by the Ukrainian armed forces. Melnikov's photography has been entered into a series of work called ‘Black Days of Ukraine', which he created during his travels in Donbass. The internationally acclaimed photojournalist stayed there for over a month to document the dramatic events in Ukraine's recent history.

"I saw with my own eyes and through the camera tried to convey the horror of what is happening there. This is the strength of my photo reports — in the tragic reality. I have ambivalent feelings — I am proud of the prize, as a journalist and professional at the same time I'm really sorry for the people and civilians whose lives are in trouble now. Lighting military conflicts and tragedies through photos — it is an important job that a lot of journalists makes annually around the world, often risking their lives", said Melnikov.

© Sputnik / Alexandr Kryazhev
Sputnik Photojournalist Wins International Magnum Photography Awards 2016
Valery has also won various prestigious photojournalistic awards during his career. His photos have been selected for many shortlists and have won numerous international photo competitions. These include the Pictures of the Year International 2016, Sony WAP 2015, Days Japan International Photo Journalism Award 2015, China International Press Photo Contest 2013, 2014, and 2015, the Vilnius Photo Circle 2015, Professional Photographer of the Year 2014, KOLGA TBILISI PHOTO 2015, and the Silver Camera 2013 among others.

Sputnik Images is the photo bank of the Sputnik International News Agency and Radio with multimedia news hubs in dozens of countries. Sputnik broadcasts through its websites, analogue and digital radio broadcasting, mobile apps, and social media accounts. Sputnik newswires operate 24 hours a day in English, Arabic, Spanish and Chinese.

Sputnik has websites in over 30 languages, including English, Arabic, Spanish, Italian, Chinese, Polish, Portuguese, Serbian, Turkish, and French. Sputnik websites offer a variety of content which ranges from infographics, videos and photo reports to online broadcasts and polls. Besides the latest news, Sputnik also publishes analytics and exclusive interviews.