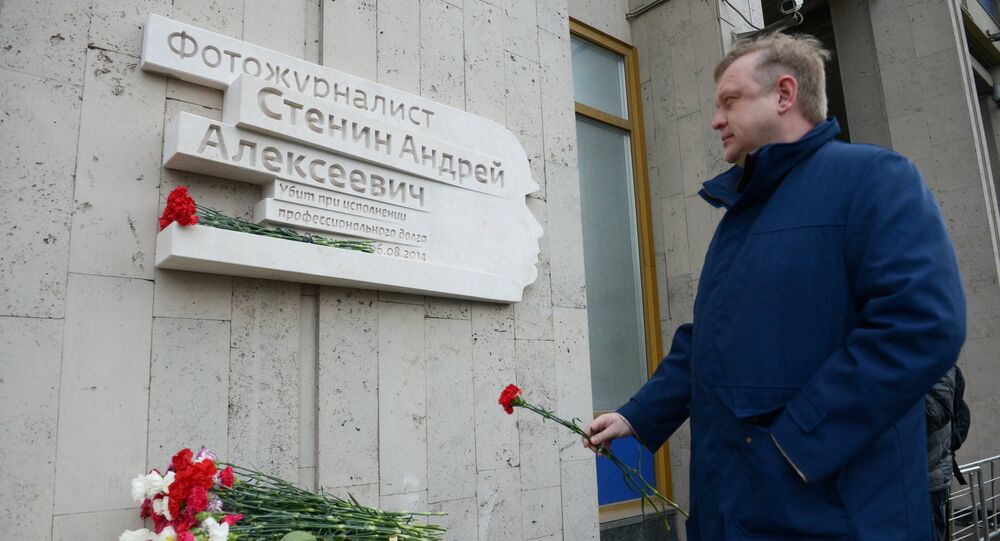 On Monday, December 22 Andrei would have been 34.

The plaque with the journalists's portrait on it says "Photojournalist Stenin Andrei Alexeyevich killed while performing his professional duties near Donetsk on 06.08.2014."

© RIA Novosti . Alexander Vilf
Name of Russian Journalist Andrei Stenin May Appear on Memorial in Washington
"We have gathered today because of the sad, tragic reason — but at the same time for a joyous event. Today, on the birthday of our friend and colleague Andrei Stenin we are opening a memorial plaque to commemorate his heroic exploit and [serve] as an example of the highest standard of journalism, when a journalist is ready to give his life for the truth, for the people, his spectators, his listeners, his readers were able to know what he sees with his eyes," Rossiya Segodnya Director General Dmitry Kiselev said at an opening ceremony.

Photojournalist's mother, Vera Stenina thanked everyone who cared for and remembered Andrei and said she believes her son had a happy life. "He did his job honestly and well," Vera Stenina said.

The ceremony was attended by the head of the Federal Agency for Press and Mass Communications Mikhail Seslavinsky, director general of the VGTRK media holding Oleg Dobrodeev and by Stenin's colleagues from media organizations that have also lost journalists in the Ukrainian conflict. The ceremony was followed by a multimedia press conference devoted to the launch of the first International Photojournalism Competition named after Andrei Stenin, created by Rossiya Segodnya to commemorate him.

The photojournalist, traveling in a car, as part of a ten vehicle convoy carrying civilians and guarded by self-defense forces, came under heavy fire from what was suspected to be Ukrainian military.

Andrei Stenin was buried at Troyekurovskoye Cemetery in Moscow — not far from journalists Igor Kornelyuk, Anton Voloshin and Anatoly Klyan, who were also killed in Ukraine in 2014.

Russian President Vladimir Putin awarded the photographer with a posthumous Order of Bravery.