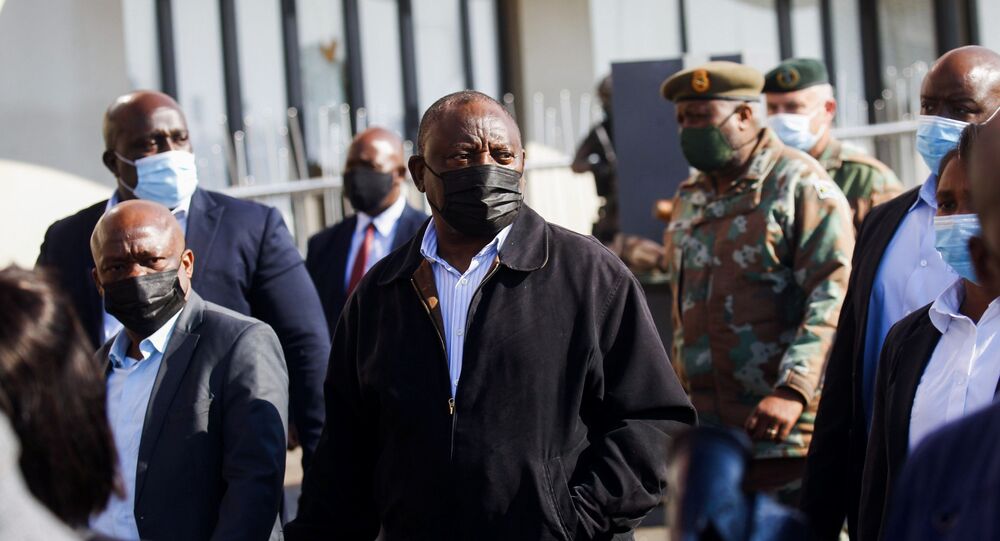 South African President Cyril Ramaphosa said on Friday in a television address that a state of emergency in response to days of rioting was not needed because the violence was declining and calm was returning.

"It is clear now that the events of the past week were nothing less than a deliberate, coordinated and well-planned attack on our democracy. The constitutional order of our country is under threat," Ramaphosa said on Friday evening. "These actions are intended to cripple the economy, cause social instability and severely weaken – or even dislodge – the democratic state. Using the pretext of a political grievance, those behind these acts have sought to provoke a popular insurrection."

However, he cautioned that despite fears the riots would cause shortages of essential supplies, security forces were working with businesses to ensure the safe transportation of fuel, food, oxygen and medicine, so there was no need for citizens to panic buy.

"They have sought to exploit the social and economic conditions under which many South Africans live – conditions that have worsened since the onset of the coronavirus pandemic – and to provoke ordinary citizens and criminal networks to engage in opportunistic acts of looting. The ensuing chaos is used as a smokescreen to carry out economic sabotage through targeted attacks on trucks, factories, warehouses and other infrastructure necessary for the functioning of our economy and the provision of services," Ramaphosa said.

"We will extinguish the fires that are raging, and stamp out every last ember. We will identify and act against those who lit the flame, and those who spread it," he said. "We will find those who instigated this violence. They will be held accountable for their deeds. We will not allow anyone to destabilise our country and get away with it."

However, he noted that 10,000 South African National Defense Force troops had been deployed "to supplement the work of police, with another 15,000 who had been activated and would be deployed over the weekend.

Ramaphosa, who came to power in 2018 amid a vote of no confidence that ousted then-President Jacob Zuma, said his government would undertake a critical review of its preparedness and response to such incidents, noting they had been poorly prepared.

More than 2,550 people have been arrested in connection with acts of violence as well as looting, and at least 212 people have been killed, he said: 180 in KwaZulu-Natal Province and 32 in Gauteng Province.

He also noted that 161 malls and shopping centers, 11 warehouses, 8 factories and 161 liquor stores and distributors had been "extensively" damaged, and that the chaos would cause further job losses. Although sparked by Zuma's arrest last week for contempt of court, the demonstrations that began on July 9 were fanned by catastrophically high unemployment and COVID-19 shutdowns that included temporary bans on the sale of liquor, which helped to bring huge numbers of people into the streets.

Ramaphosa aid the government is working on a comprehensive support package to extend relief to those affected by the calamity.

"We are in the process of providing immediate food relief to households. We are targeting areas affected by the looting and where people have no access to food," Ramaphosa said, adding that "Provincial departments of Social Development and SASSA [South African South Security Administration] will use their remaining budget to provide support in the form of food parcels, cash and food vouchers."

"To assist with the immediate needs of affected communities, the Solidarity Fund has established a Humanitarian Crisis Relief Fund to assist those in greatest need. We are calling on all South Africans to support this fund," he added. "Social partners have been meeting to discuss a range of measures which can be implemented to provide immediate relief within our fiscal means. This includes emergency food relief and other assistance to those in greatest distress."

He also said that the urgently needed vaccination campaign would be restarted as soon as possible.

The president cautioned that "while calm has returned to most of Gauteng and KwaZulu-Natal, the threat to our country and to our democracy remains present and real. Those responsible for organising this campaign of violence and destruction have not yet been apprehended and their networks have not yet been dismantled. We must therefore remain vigilant."