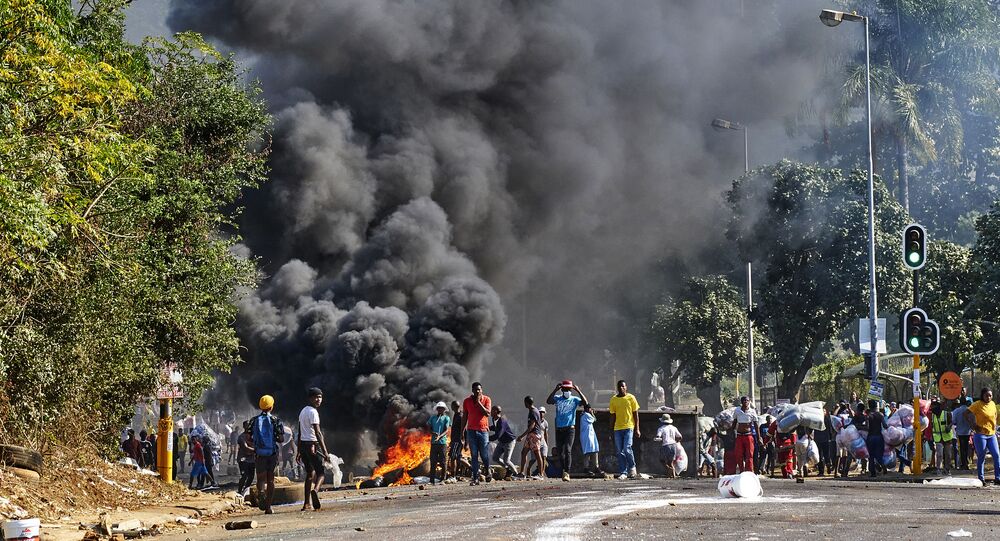 South Africa’s 79-year-old ex-President Jacob Zuma handed himself in to the police on 7 July to serve a 15-month jail term for contempt of court for refusing to appear at a corruption enquiry. Zuma is accused of favouring an Indian-origin business conglomerate, the Gupta Family, with lucrative contracts during his term in power.

Looting and vandalism by supporters of South Africa’s jailed former President Jacob Zuma have spread to predominantly White and Indian suburbs in KwaZulu-Natal and Gauteng, two of the country’s most populous provinces.

Videos emerging on social media show looters, including women, making off with goods after forcibly entering shops and neighbourhoods in KwaZulu-Natal. Most of the looting videos are said to be from around Durban and Pietermaritzburg, the capital of the province.

The Daily Mail and the Guardian reported that looting continued unabated on Tuesday, more prominently around Pietermaritzburg, despite South African President Cyril Ramaphosa calling in the country’s army to back up the police to restore normalcy in the streets.

At a press conference on Tuesday, KwaZulu-Natal’s premier Sihle Zikalala called on the protesters to maintain calm in view of increasing tensions between the country’s communities. Zikalala, who also hails from Zuma’s Africa National Congress (ANC), the country’s governing party, remarked that it would be good to see the ex-president released, but the “looting had to stop.”

Zikala further justified the collective response of White and Indian communities to the looting in their neighbourhoods, saying that they had the “right to do so”, per a local media report.

Whites and Indians join together in South Africa to protect themselves against black rioting mobs !! pic.twitter.com/5Yx3lvC3au

26 people have been killed in the unrest so far, Zikalala said.

South Africa’s Police Minister Bheki Cele, meanwhile, said that 757 rioters have been arrested as of Tuesday, including 304 in KwaZulu-Natal and 453 in Gauteng.

The governing ANC has disowned responsibility for the ongoing riots and looting, with an official spokesperson telling local media that the rioters didn’t belong to the outfit.

Riots in South Africa, Protests in Cuba, and Arrests of Colombian Mercenaries in Haiti