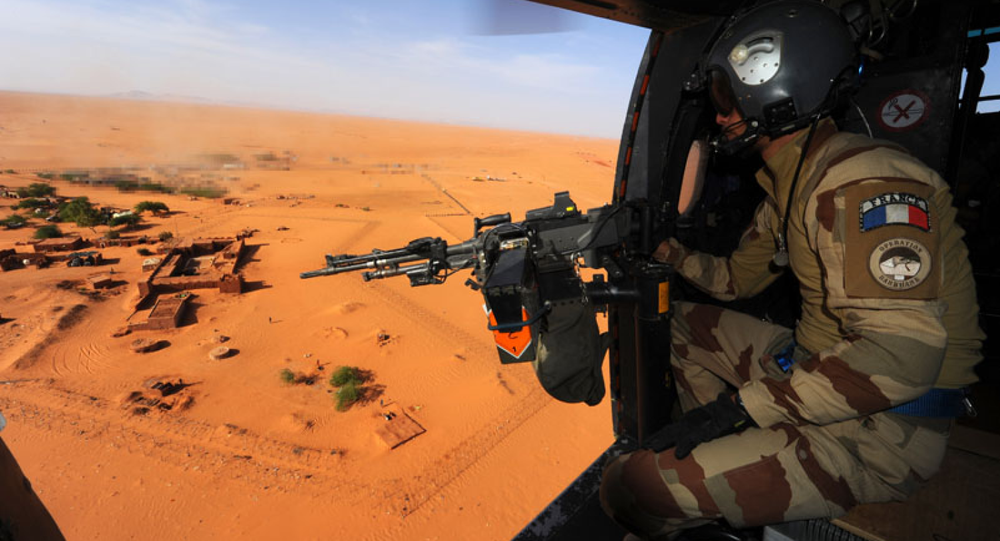 Macron Reveals Only Half of 5,000-Strong Barkhane Force Leaving Africa, Despite Claimed End of Ops

Last month, French President Emmanuel Macron revealed that the eight-year-long Operation Barkhane would soon come to an end. However, the highly unpopular war won’t truly be over: he revealed on Friday that only half of the 5,100 soldiers will be coming home as the rest rebase southward.

"We will remain committed, but to remain committed is also to adapt," Macron told reporters on Friday after a summit with leaders of the G5 Sahel nations, which include the former French colonies of Mauritania, Mali, Burkina Faso, Niger, and Chad.

He revealed that by the beginning of next year, 2,000 French troops will have left Africa and the remaining 2,500-3,000 soldiers will be shifted southward. The French bases in Kidel, Tessalit and Timbuktu will be closed amid the move.

"This reconfiguration will begin in the coming weeks. In line with the shift in threat to the south, it will mean a reduction in our military footprint primarily in the north," Macron said. “There will also [be] a dimension of reassurance ... to remain permanently ready to intervene rapidly in support of partner forces,” he added, referring to air support from Niger and Chad.

That number is significantly larger than the “several hundred forces” he said on June 10 would remain behind as part of the Takuba Task Force, fighting Islamist militias near where Mali, Niger and Burkina Faso meet.

In mid-June, Macron announced the end of Barkhane after what he called a “coup within a coup” occurred in Mali, one of the primary battlefields of the War on Terror-style campaign. Malian Col. Assimi Goita, the mastermind behind the August 2020 coup that led to the creation of a tenuous interim government between military and civilian leaders, arrested and removed from office the president and prime minister, and subsequently promoted himself to head of state after they attempted to reduce the military’s influence over the government. In response, Macron suspended French cooperation with the Malian Army, then ended the entire Barkhane operation outright.

The sudden end came amid a pullout of French troops from the Central African Republic, another former French colony. As Sputnik has reported, the wars are highly unpopular both in France and the countries where they are deployed, and with Macron also beginning his re-election campaign last month, it’s clear he’s concerned about public opinion.

“France doesn’t have the vocation or the will to stay eternally in the Sahel,” Macron said Friday. “We are there because [we] were asked to be.”

Barkhane began as Operation Serval, a deployment to Mali in early 2013 to halt the rapid expansion of Tuareg rebels who had capitalized on the chaos created by yet another coup, ironically carried out by military officers upset with the government’s lackadaisical approach to the Tuareg uprising.

However, late last month, the United Nations extended its MINUSMA peacekeeping mission in Mali, maintaining its maximum deployment of 13,289 military personnel and 1,920 police, but saying it was imperative the government keep to its promised schedule for February 2022 elections.

It’s unclear what has caused the French troop numbers to increase, since Mali is no longer participating and Nigerien President Mohamed Bazoum made clear his dissatisfaction with the French deployment, but didn’t totally fault European troops for the lack of a victory.

“We are not seeing results because at the moment, it is mostly our armies that have not been up to the task," Barzoum said. "Five thousand French troops in Mali will not fix the problems in Niger, Burkina Faso, Ivory Coast or elsewhere. That is clear, and we must understand that.”

However, in the days prior to the summit, Macron hosted Chad’s de facto interim president, Mahamat Idriss Deby Itno, in Paris. With Barkhane’s headquarters in the capital of N’Djamena, Chad under Deby Itno’s father, Idris Deby, was a close French military partner in the region for three decades, and Deby Itno clearly hoped to continue that relationship amid his “visit of friendship and work.”

At the meeting, Macron pledged to increase aid to Deby Itno’s military junta, provided it, too, continues on a path to hold new elections next year. He also hailed Chad’s commitment to continuing the fight begun under Operation Barkhane and continuing to cooperate with French forces and the forces of other Sahel states, even as Chad continues its fight against the rebel group Front for Alternation and Concord in Chad (FACT), who Idris Deby was killed fighting in April.