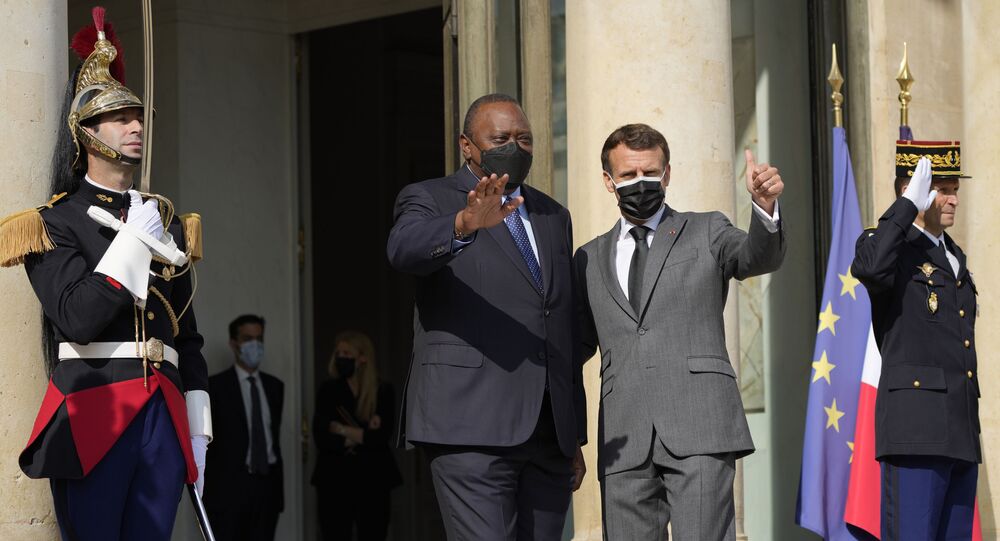 Kenyan President Uhuru Kenyatta traveled to Paris earlier this week to seal the deal on a new highway, the latest of several joint economic projects. However, France isn’t just talking to Kenya, it’s expanding its influence across East Africa, an area outside its traditional sphere of influence on the continent.

Kenyatta and French President Emmanuel Macron are set to finalize plans for construction of a 233-kilometer four-lane highway from the Kenyan capital of Nairobi to Mau Summit, greatly alleviating traffic congestion along one of the country’s primary travel arteries. The public-private partnership will see Kenya National Highways Authority partner with a French consortium of Vinci Highways SAS, Meridian Infrastructure Africa Fund, and Vinci Concessions SAS to build, operate, and maintain the highway for the next 30 years for 160 billion Kenyan shillings ($1.48 billion), according to Nairobi daily The Star. It will be a toll road.

The project will also include widening the existing road along that route. Some of Vinci’s other work includes the A7-2 Motorway in Germany and the M11 Neva Highway in Russia.

Kenyatta and Macron also discussed helping Kenya to manufacture vaccines locally, something Nairobi became more interested in after supplies of the AstraZeneca COVID-19 vaccines from India were interrupted in May, as COVID-19 cases exploded in that country. While no specifics of their talks were given, if Kenya did begin manufacturing vaccines it would become one of just a handful of countries in Africa to do so, most of which have remained dependent on the short-supplied COVAX program managed by the World Health Organization and fueled by donations from richer nations. Others include Egypt, Morocco, and South Africa.

The two heads of state also planned a summit for July 28 and 29, at which they will be joined by UK Prime Minister Boris Johnson to set up a $5 billion education investment for 175 million children in low-income countries, according to The Standard, a Kenyan daily paper.

However, the highway isn’t the only economic project France is building in Kenya. In October, when Macron and Kenyatta hammered out much of the details on the highway project, they also discussed construction of a commuter rail line from the Nairobi central business district to Jomo Kenyatta International Airport and a 400kV electrical transmission line stretching 45 kilometers from Menengai to Rongai, Kenya’s Business Daily reported at the time.

Paris’ interest in Kenya is new: Macron’s 2019 trip there was the first by a French head of state since Kenya won independence from the United Kingdom in 1963, during which he secured $2.27 billion worth of contracts for French companies.

However, French interest has been expanding across East Africa, an area outside its traditional sphere of influence. Kenya, as well as Uganda and Tanzania, were British colonies, not French ones, and France has tended to focus on the vast swath of western and central African nations over which it once ruled.

In Uganda and Tanzania, French oil giant Total scooped up a stake in the East African Crude Oil pipeline (EACOP) from Irish gas company Tullow in 2020. The 1,445-kilometer pipeline, being built in cooperation with China National Offshore Oil Corporation (CNOOC), will extend from Hoima in western Uganda’s oil fields south around Lake Victoria before turning east to the Tanzanian port of Tanga.

EACOP was originally planned to go through Kenya, but Total changed the route over fears it would be vulnerable to attack by Al-Shabaab, a terrorist group in neighboring Somalia that mounted a daring cross-border attack into Kenya in early 2020. Once completed, it will be the world’s longest heated oil pipeline.

In May, Macron pressed the Museveni government on speeding up the construction timeline on the project just weeks after Tanzania and Uganda finalized the deal, saying it is a “major opportunity to intensify trade between our two countries and to further expand our cooperation.”

The project is just one of several Total has poured big money into in recent years, including a large concession in Mozambique worth $20 billion.

In 2019, Alfred Onek, a spokesperson for the French embassy in Kampala, boasted that investments by Total and other French firms were improving employment in Uganda and that relations were “quite warm” as a result. He noted French-Ugandan military training was expanding, as well.

The Tanzanian government penned a deal with the French Development Agency (AFD) earlier this month to build a 150-megawatt solar power plant in Kishapu in southern Tanzania for $154 million. Last year, Tanzania and the AFD signed $272 million in development deals, including rural electrification projects, a power connection with Zambia, and water extensions to the suburbs of Mwanza, Tanzania’s chief port city on Lake Victoria.

Additionally, in former-Belgian colony Rwanda, Macron has tried to “reset” relations. The French president traveled there last month to admit the “magnitude of our responsibilities” for the 1994 genocide of up to 800,000 Tutsis by the ruling Hutu government. However, he stopped short of admitting French forces who protected Hutu leaders from Tutsi attacks during the height of the killing had been an “accomplice” to the massacre. A March report by a fact-finding commission set up by Macron found France bears “overwhelming responsibilities” for allowing the genocide to take place.

However, during that same trip, Macron and Rwandan President Paul Kagame signed a $1.7 million deal to facilitate sports talent and a $71 million deal to sell Rwanda COVID-19 vaccines.