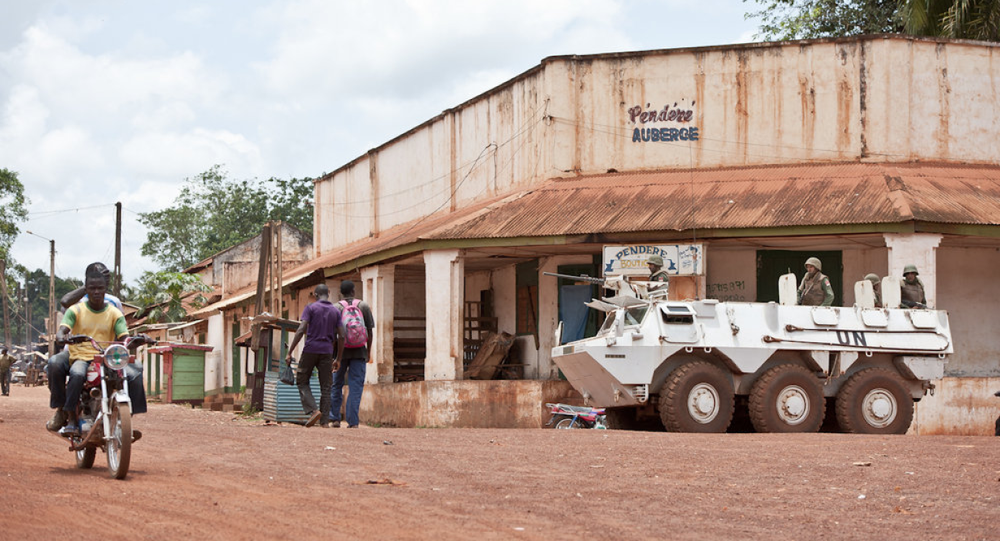 When France pulled its cooperation with the Central African Republic earlier this month and the CAR then accused a French national of espionage, it quickly precipitated a government collapse and a new pro-Western prime minister was appointed.

At a UN Security Council meeting on Wednesday, several Western nations seized an opportunity to attack Russia during a hearing on the Central African Republic, seeking to blame the humanitarian crisis on Russian training forces. The incident comes days after Paris ended a security agreement with CAR, claiming the government had become too close to Moscow.

At the hearing, Mankeur N'diaye, head of the United Nations Multidimensional Integrated Stabilization Mission in the Central African Republic (MINUSCA), told delegates that “violations” of human rights were at the core of an “unprecedented humanitarian crisis.”

"Never in the past have violations and breaches of international humanitarian law attributable to the armed forces of the CAR, bilateral forces and other security personnel … equaled the proportions documented by MINUSCA,” N'diaye said, according to the Journal de Bangui. He explained that "new waves of displacement" had left 57% of the population in serious need of humanitarian assistance.

N'diaye said that “in the Center and North-East is an asymmetric war with armed groups of the Coalition of Patriots for Change (CPC),” which is united behind former CAR President Francious Bozize. The uprising began after the constitutional court rejected his application to be a candidate in the December 2020 elections. These groups, he said, are “mostly responsible for the serious human rights violations.”

He finished by urging the member states to continue to support MINUSCA’s effort. The mission has about 15,000 personnel, 11,000 of whom are soldiers, deployed to CAR.

Hearing Goes Off the Rails

However, after N'diaye was done, delegates from the US, the UK, and France used his words to blame Russia for the violations.

“I think we need to be clear about these bilateral personnel - the individuals committing what many are now referring to as àtrocities’ are not independent actors - they are operating as extension of Russia’s Ministry of Defense,” US deputy ambassador Richard Mills said.

Mills said Washington is “deeply disturbed” that Russia has failed “to prevent its mercenaries from impeding MINUSCA’s freedom of movement on a daily basis, claiming “these bilateral Russian actors threatened” MINUSCA Deputy Special Representative Denise Brown and a UN delegation on a humanitarian mission to Bangui on May 28.

France’s UN ambassador, Nicolas De Riviere, said N’diaye’s reports “point to the responsibility of a new actor, who is operating alongside the Central African armed forces and whose status is a mystery.”

“Some will try to deny the presence of the Wagner company,” De Riverie said, referring to an illegal private military company Western nations have claimed is connected to the Russian government. However, instead of furnishing evidence of the group’s presence in the CAR or its alleged connections to the defense ministry, he instead called on MINUSCA to verify the identities of the people committing the atrocities.

Britain’s deputy ambassador James Roscoe similarly said that “Russian private military companies acting in concert with the national armed forces to obstruct MINUSCA and to violate the rights of the civilians and citizens.'' He said Moscow would deny this, “but the evidence is increasing and overwhelming, and I hope they will reflect on the role they want to play in the Central African Republic and their responsibilities as a permanent member of this council.”

However, Russia’s deputy UN ambassador, Anna Evstigneeva, fired back at this, noting that the Russian military instructors in the CAR at the request of the government “are successfully enhancing the professional expertise of the Central African security forces without taking part in military actions against illegal armed groups.”

“This looks more like an anti-Russian political hit job,” Evstigneeva said, noting the “dubious” claims made to discredit Russian trainers have always relied on anonymous sources. A CNN report earlier this month, which was based entirely upon third-party reporting by a nonprofit set up by Western intervention enthusiasts George Clooney and John Prendergast, stands as a prime example.

“As for the unfounded allegations coming from the US, they’re not done by chance,” Evstigneeva added. “Our colleagues seem to see Russian instructors or mercenaries everywhere.”

France’s Rivalry With Russia in CAR

In addition to the UN forces, separate French and Russian missions have also been deployed to CAR at the invitation of Bangui, for purposes of training CAR troops. However, Paris announced on June 9 it was terminating its agreement, which included a $12.8 million training budget contribution. The French Ministry of the Armed Forces said President Faustin Archange Touadéra hadn’t lived up to “a number of commitments,” including ending so-called “disinformation campaigns” Paris claims are being waged against the French presence in the CAR by Russia.

Russia has sent several hundred military instructors to the CAR, which do not perform combat roles. Since their arrival, the trajectory of the conflict has changed and the central government has mounted a new offensive, recapturing about two-thirds of the rebels’ territory, according to Journal de Bangui.

That is perhaps unsurprising, considering the poor results achieved by five years of European Union training in the country: in February, several members of the European Parliament blasted the EU Training Mission in the Central African Republic (EUTM-RCA) for failing to increase the performance of the country’s security forces.

“The EU has trained thousands of FACA [Central African Armed Forces] soldiers who are not capable of fighting because the mission’s training mandate is not appropriate,” Spanish MEP and journalist Javier Nart said on February 24. “We make the policy here in Brussels but it is Bangui that sees the deaths. If we are going to do military training in Africa, then we should do it realistically and effectively.”

Before 1960, France was the colonial ruler of the CAR, but after it gained formal independence, strong military and economic ties between them remained.

France only recently lost its status as the CAR’s primary export partner to China, declining from 31.2% of all exports in 2017 to just 6.62% in 2019, according to data from the French Center for Prospective Studies and International Information (CEPII). Most of its exports are raw materials like industrial diamonds, timber and gold. These form a small part of the CAR’s economy, which is mostly geared toward subsistence farming since the country is one of the world’s poorest and most underdeveloped. France has intervened militarily in the CAR seven times.