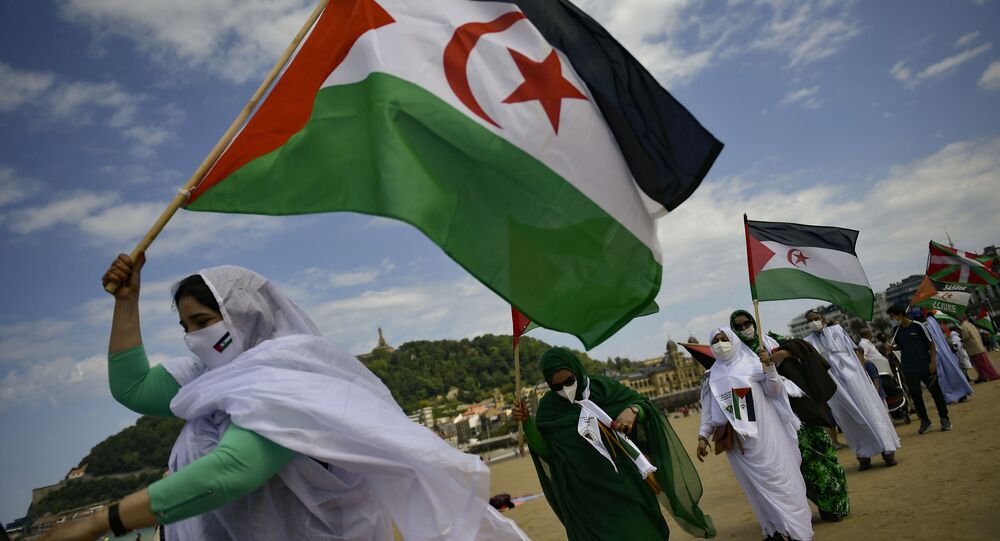 The non-self-governing territory of Western Sahara has seemingly become a pawn in greater disputes, with Morocco’s claim to rule the country being affirmed by the US in exchange for the normalization of relations with Israel, and now Spain is pushing for its ally in Washington to reverse the decision.

During a phone call with US Secretary of State Antony Blinken on Friday, Spanish Foreign minister Arancha Gonzalez Laya asked Washington to reverse its December 2020 recognition of Morocco’s claim of sovereignty over Western Sahara, according to Spanish paper El Confidencial, which cited “sources familiar with the deal between the two ministers.”

A brief readout of the conversation posted by the US State Department makes no mention of the appeal; however, past conversations about Western Sahara haven’t made their way into official statements, either.

Western Sahara is a former Spanish colony, but since colonial forces withdrew in 1975, Madrid has continued to play a major role in Saharawi politics, most recently allowing Brahim Ghali, leader of the Saharawi liberation group Polisario Front, to be treated for COVID-19 at a Spanish hospital. According to El Confidencial, however, Gonzalez’s request is part of a larger spat between Madrid and Rabat that includes Spain’s exclaves of Ceuta and Melilla, surrounded by Morocco on the North African coast.

The paper reports that Spain hopes the US will become a mediator in its dispute with Morocco, including settling a simmering situation likely created by former US President Donald Trump’s recognition of Morocco’s claims over Western Sahara on December 10, 2020.

That same day, Morocco called off a planned summit with Spain that would have included a visit to Rabat by Spanish Prime Minister Pedro Sanchez. While the official reason was “the current epidemiological situation,” the Spanish outlet Atalayar claims the real reason is that Sanchez’s government includes the center-left party Podemos, which supports the self-determination of the Saharawi people, who are indigenous to Western Sahara. Podemos founder Pablo Iglesias  Turrión was Sanchez’s deputy prime minister at the time.

Sanchez’s government issued a statement at the time saying the dispute can only be resolved through international consensus - a position reiterated in May when Gonzalez called for the status of Western Sahara to be resolved “as established by the resolutions of the UN Security Council,” which has promised since 1991 to hold an independence referendum in the territory.

Although the summit was rescheduled for February, that meeting was also postponed, with Moroccan Prime Minister Saad Eddine El Othmani having recently made remarks suggesting the situation of Ceuta and Melilla should be renegotiated.

The dispute may also be responsible for Spain’s absence from the “African Lion'' war games organized by US Africa Command and hosted in Tunisia, Senegal, and Morocco. Spanish daily El Pais reported that with some of the drills reportedly being held in Western Sahara, Madrid didn’t want to endorse Rabat’s claims by taking part, but Maghreb Intelligence has claimed Rabat disinvited Madrid - a position taken up by the DC-based outlet Morocco World News as well.

El Confidencial further suggests that Sanchez has or will also lobby the French government for support in the dispute, since Spain and France and both European Union and NATO members and as the former protector of Morocco, Paris has “the greatest influence over Rabat.”

Sanchez also met with Biden at the NATO summit in Brussels on Monday, although according to El Pais, it was not substantive, being limited to a brief conversation after the group photo.

The Biden administration has faced pressure from lawmakers, current and former US diplomats, Saharawis and the international community to reverse Trump’s recognition. Biden has so far taken a middling position, with State Department spokesperson Ned Price saying last week the administration was “consulting privately with the parties about how best to halt the violence and achieve a lasting settlement.”

“I don’t have anything to announce at the moment, but I think if you look at Western Sahara as part of... the previous administration’s broader approach to the region in the context of the Abraham Accords, that is where you see quite a bit of discontinuity between the approach we have pursued and we have enacted versus what the previous administration did,” Price added.

The news comes as the United Nations General Assembly’s Committee on Decolonization, also called the Committee of 24 (C-24), met in New York on Monday and took up the question of Western Sahara. Dr. Sidi Omar, Polisario’s representative at the UN, told the body the “inaction and complacency of the international community” has emboldened Morocco to violate UN resolutions and international law “with complete impunity.”

“For three decades, we have been committed to the peaceful solution and we have constructively engaged in the UN peace process demonstrating patience, utmost restraint, and flexibility, despite the provocations and all the injustices that our people continue to endure at the hands of the Moroccan occupying state,” Omar said. “Today, the Sahrawi people, under the leadership of the Frente POLISARIO, are saying loud and clear that enough is enough. Yes, we remain committed to peace, but we will never give up our inalienable and non-negotiable right to self-determination and independence.”

In my statement at C-24 session, I underlined that the Sahrawi people, under the leadership of the Frente #POLISARIO, are saying loud and clear that enough is enough, and that we will never give up our inalienable and non-negotiable right to self-determination and independence. pic.twitter.com/ilLer3I20P

​“The legal nature of Western Sahara as a decolonisation issue on the agenda of this Committee since 1963 is abundantly clear, despite the futile attempts of the occupying power and its apologists to demonstrate otherwise. Therefore, given the gravity of the current situation, efforts should be redoubled to allow the people of Western Sahara the chance to exercise freely and democratically their right to self- determination and independence,” he added.

Other nations also spoke in defense of the UN peace process and MINURSO, the UN’s special mission to Western Sahara, including Algeria, South Africa, and Angola.

Mathu Joyini, South Africa’s permanent UN representative, urged C-24 to send a fact-finding mission to Western Sahara “to obtain first-hand information on the general situation in the Territory,” noting no such mission had been sent since 1975, when the territory gained independence from Spain and before the war between Polisario and Morocco that led to a peace agreement and the creation of MINURSO in 1991.

Angola’s permanent representative to the UN, Maria de Jesus Ferreira, said it was necessary for the UN to appoint a new special envoy to Western Sahara, something that hasn’t happened since the last one quit in 2019, stalling any kind of peace negotiations between the Saharawis and Moroccans.

MINURSO is the only UN mission to lack a human rights component, and Saharawi figures and international human rights groups have both pressured the UN to do so, citing widespread alleged human rights violations by Morocco in Western Sahara and against Saharawis and Moroccans who challenge Morocco’s right to control the territory.