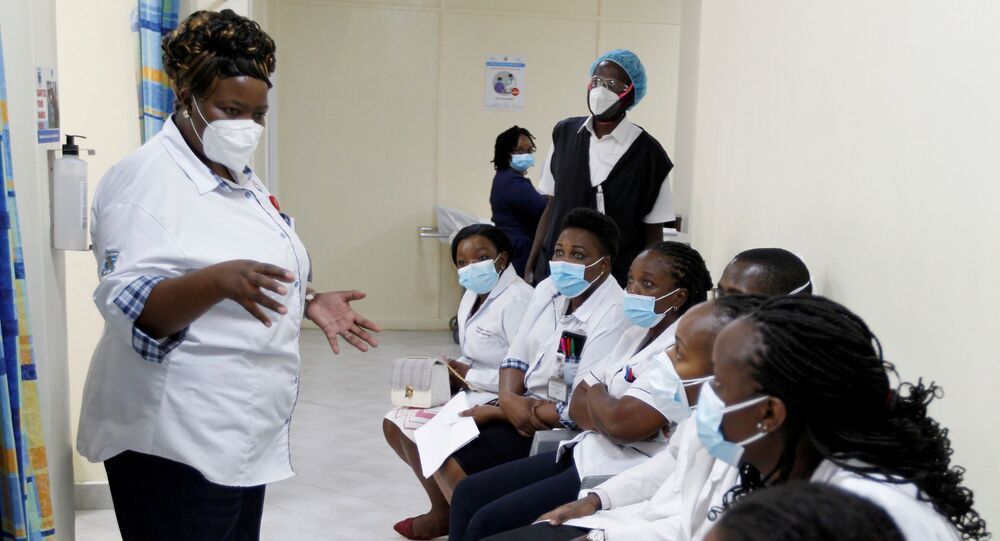 The World Health Organization (WHO) has made an urgent call for another 20 million doses of AstraZeneca’s COVID-19 vaccine to be distributed in African nations in the next six weeks, or many who have received their first dose will not get the boosted protection of a second shot.

“As supplies dry up, dose-sharing is an urgent, critical and short-term solution to ensuring that Africans at the greatest risk of COVID-19 get the much-needed protection,” Dr. Matshidiso Moeti, WHO Regional Director for Africa, said on Thursday. “Africa needs vaccines now. Any pause in our vaccination campaigns will lead to lost lives and lost hope.”

“It’s too soon to tell if Africa is on the cusp of a third wave. However, we know that cases are rising, and the clock is ticking so we urgently appeal to countries that have vaccinated their high-risk groups to speed up the dose-sharing to fully protect the most vulnerable people,” she added.

Health experts have said that the gap between first and second doses of AstraZeneca vaccine can be anywhere between 4 to 16 weeks after the first dose and retain their effectiveness as a booster on the first dose.

The WHO added that another 200 million doses of any WHO Emergency Use-Listed COVID-19 vaccine will also be needed by September in order to keep the continent on track to hit 10% vaccination for its roughly 1.4 billion people.

© REUTERS / FRANCIS KOKOROKO
Boxes of Oxford/AstraZeneca coronavirus disease (COVID-19) vaccines, redeployed from the Democratic Republic of Congo, are seen loaded onto a refrigerated delivery truck in Accra, Ghana, May 7, 2021

However, the UN-affiliated agency further noted that “in the longer term, Africa must boost its manufacturing capacity for vaccines,” while acknowledging that intellectual property waivers, a “crucial first step,” would not be enough to help by itself and must be accompanied by the sharing of expertise and the necessary technologies.

According to data collected by the New York Times, just 2.2% of Africans have been vaccinated against COVID-19 so far, the lowest rate of any continent. The highest is in North America, where 59% have received at least one shot.

The vast majority of shots in Africa have been the Oxford-AstraZeneca vaccine, a joint Anglo-Swedish product. The vaccine can be stored at higher temperatures than some other Western-made vaccines, but its relatively short shelf life has caused some shots to go to waste.

In Malawi earlier this month, nearly 20,000 AstraZeneca shots had to be thrown out, and South Sudan is giving back 72,000 of the 132,000 shots it received from the WHO’s COVAX program in March.

“We don’t want to run the risk of [the drug] expiring here in our hands,” South Sudan’s Health Ministry undersecretary, Dr. Mayen Machuot, told reporters on Monday. The Democratic Republic of the Congo began giving 1.3 million AstraZeneca doses to other countries last month over the same fears.

Vaccines are ‘Trickling Into Africa’

A number of nations have pledged large numbers of vaccines to Africa, although some might not arrive for some time.

French President Emmanuel Macron said on Friday that Paris would deliver 30 million COVID-19 vaccine doses from its own supply to Africa by the end of the year, while Germany will deliver another 30 million and the rest of the European Union another 40 million in that time.

"How do we boost the production of vaccines on the African continent?" Macron said, speaking at a joint press conference with South African President Cyril Ramaphosa in Pretoria. "On this, we will this afternoon have an investment strategy to help these [industries] produce more, and quite quickly."

Macron said that France has already partnered with the Biovac Institute in Cape Town and he later revealed another partnership with Aspen, a South African pharmaceutical company.

Ramaphosa said at the presser that "vaccines are just trickling into Africa."

"We cannot continue to wait at … the back of the queue," he said. "The longer we wait, the more lives we put at risk."

Russia’s Sputnik V vaccine, produced by the Gamaleya Research Institute, is poised to become a major player in Africa. Moscow has pledged 300 million shots to the African Union by May 2022, and also signed deals to produce the vaccine in Algeria and Egypt. Egyptian pharmaceutical company Vacsera has also signed a deal to produce China’s SinoVac vaccine.

African nations have also collectively ordered 33 million shots from China, which has also donated 5.45 million, most of which were SinoVac and SinoPharm vaccines. Beijing has championed the needs of Africa and of poorer nations around the globe at the United Nations, with Chinese Foreign Minister Wang Yi telling the Security Council recently it must “help Africa bridge the ‘pandemic divide’” by providing “more assistance for Africa in terms of pandemic prevention materials, medicines, technology and funding to ensure the accessibility and affordability of vaccines.”

The WHO also said on Friday that more than 100 of its member states, including 54 African nations, had co-sponsored a draft resolution by Ethiopia to be presented at the World Health Assembly urging expanded local production, the promotion of technology transfers and innovation, and “consider[ing] the agreement on Trade-Related Aspects of Intellectual Property Rights and intellectual property rights through the lens of boosting local production.”

TRIPS is a 1995 World Trade Organization agreement that curbed the production of cheap generic drugs in the Third World, forcing poorer nations to buy name-brand drugs from First World pharmaceutical giants at First World prices. As Sputnik has reported, this has enabled companies like Pfizer, which strongly opposes a TRIPS waiver, to demand considerable collateral from Third World nations before selling them COVID-19 vaccines.

US Discusses Patent Waiver on COVID Vaccines With WHO Chief, Trade Office Says

US' Pfizer, Moderna Refuse to Sell Vaccines to Indian States As Centres Shut Over Shortage