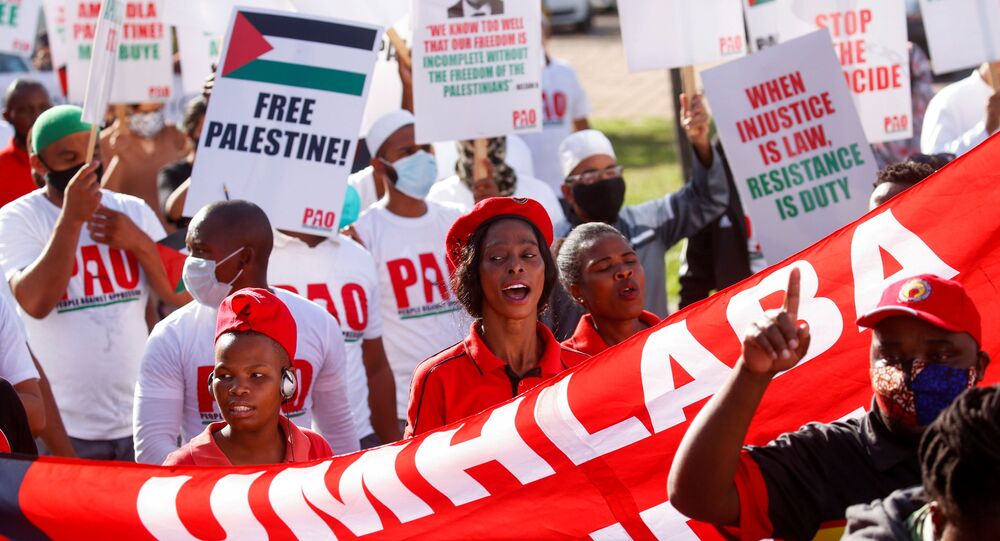 South Africa's Boycott, Divestment and Sanctions Coalition organised a march in Durban's port on Friday in protest at the docking of an Israeli merchant ship — and in support of workers who refused to offload its cargo in solidarity.

A South African dockworkers' union has refused to unload an Israeli cargo ship in protest at the bombing of Gaza.

The South African Transport and Allied Workers Union (SATAWU) announced on Thursday that its members would refuse to offload cargo from the Zim Shinghai merchantman moored in Durban harbour on the Indian Ocean coast.

The union acted following an appeal by the South African Boycott, Divestment and Sanctions (BDS) organisation on behalf of the Palestine General Federation of Trade Unions (PGFTU). The announcement came before Thursday night's ceasefire between Israel and the Hamas movement in the besieged Gaza Strip.

"We received a request from the SA BDS Coalition that as part of showing solidarity with Palestine," union Deputy General Secretary Anele Kiet said.

"SATAWU members who work in the Durban port need to boycott the shipment," he added. "Indeed we have contacted our members at the Durban port, who have confirmed they will not be offloading the shipment. We will be picketing every day at lunchtime and engaging in demonstrations."

© REUTERS / MUSSA ISSA QAWASMA
Demonstration in Support of Gaza, Jerusalem Palestinians Held in Al-Birah, West Bank
The coalition organised a march to the port on Friday to show their gratitude to the dockers — and protest the presence of the Israeli vessel to national port authority Transnet.

“The PGFTU’s call is one of many actions of boycotts, divestment and sanctions called for by Palestinians - a consequence of the barbaric Israeli onslaught on Gaza, the killings of Palestinians in the West Bank, the pogroms in Haifa Lyddia, Haifa, Jaffa and other towns and cities and the ethnic cleansing in Occupied Jerusalem,” it said in a statement.

“The action against the ship is part of a global set of actions against Zim Lines," the coalition stressed. "The protests also target Transnet, demanding that the parastatal not allow goods to or from Israel to pass through South African ports”.

Kiet clarified on Friday that dockworkers organised by other unions not involved in the boycott had continued to unload the ship's cargo, but added that SATAWU and BDS members had held a joint picket against the wok going ahead that day.

The group said over 230 people had been killed in Gaza during the 10-day exchange of Israeli bombardment and Hamas rocket fire, adding that some 70 children were among the mostly-civilian dead.

Late ANC and national president Nelson Mandela was a staunch supporter of the Palestine Liberation Organisation and met its chairman Yasser Arafat in Cairo three months after his release from prison. Diplomatic tensions have flared between the two governments during previous Israeli offensives against Gaza.

South Africa also has a sizeable Muslim population among its Indian and Cape Malay communities.