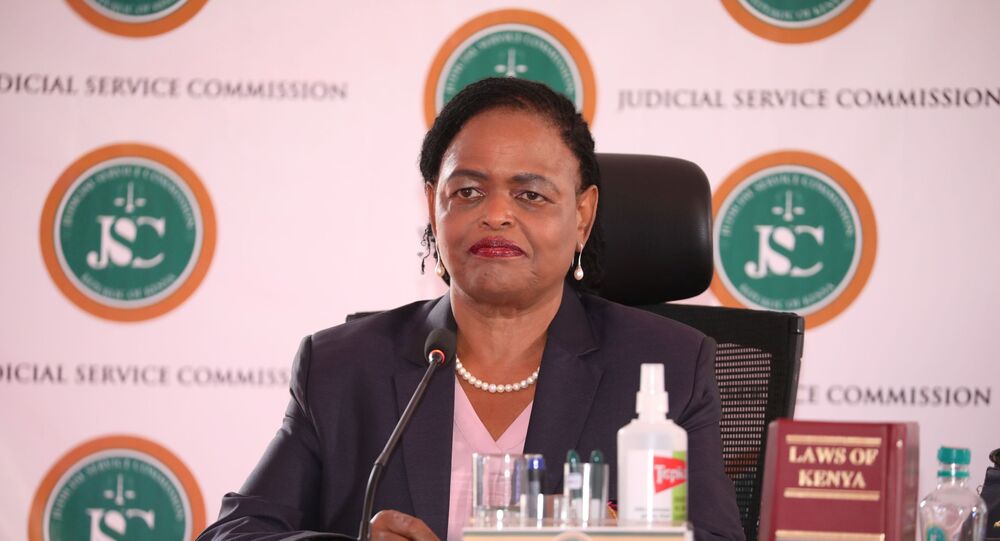 Martha Karambu Koome, who served as an appeals judge in Kenya, noted in her interview for chief justice that she would work to reduce the backlog of cases in Kenya’s Supreme Court, facilitate the appointment of additional judges and magistrates, operationalize the judiciary fund to promote independence, and promote the use of technology.

Kenyan President Uhuru Kenyatta on Wednesday appointed Koome to serve as the country’s next chief justice, effectively marking her as the first woman to hold the judicial post.

Kenyatta confirmed Koome’s appointment just a few hours after the Kenyan Parliament approved her nomination. Koome is scheduled to take the oath of office on Thursday.

“In exercise powers conferred by ... the constitution. I, Uhuru Kenyatta, president and commander-in-chief of the Kenya Defense Forces, appoint Martha Karambu Koome to be the chief justice of the Republic of Kenya," Kenyatta's announcement said, according to the Associated Press.

Koome is set to replace former Chief Justice David Maraga, who made history by leading the Kenyan Supreme Court when it annulled Kenyatta's 2017 reelection victory, a move that ordered new voting within 60 days over election illegalities and irregularities. At the time, Maraga revealed that he had received death threats following the court’s 4-2 decision against Kenyatta.

Koomes was picked by the Judicial Service Commission (JSC) from a pool of nine other candidates, including judges, prominent lawyers in private practice and law scholars.

During Koome’s April interview before the JSC, the legal official referenced her difficult experience growing up in Meru, in rural eastern Kenya in a polygamous family.

“I am a villager in the truest sense. My parents were peasant farmers and we were 18 children from two mothers. So, for all of us, especially girls - it was a struggle to overcome the odds,” she said.  Koome was born in 1960, three years before the end of British colonial rule in the region.

Koome, when asked how she would tackle issues facing the judicial system, said the position requires top-notch managerial skills that could come from anyone with the right experience regardless of gender.

“I believe the challenges are similar whether a male or female,” she told the panel, adding “leadership is gender-neutral, it doesn’t require a man or woman.”

Fred Ngatia, a lawyer who was included in the pool of chief justice candidates, has cast some doubts on how the JSC chose Koome, alleging the selection process had been rigged. Ngatia has handled high level matters, including cases for Kenyatta, the Kenyan government and its ministries, such as the Ministry of Interior and Coordination of National Government.

"Four commissioners from Mt Kenya reduced my scores yesterday afternoon after they were called by powerful people," Ngatia told the Business Daily after the JSC’s announcement. "Without that intervention, I was far ahead of all the other candidates."

Ngatia was originally cited by media outlets as the next Kenyan chief justice to succeed Maraga.

Professor Olive Mugenda, who chaired the JSC interviews, said the commission will not release the scores for each candidate. “Our duty was to select the best candidate and that’s what we have done,” she said.

The Muslims for Human Rights (Muhuri) group has also expressed concern over Koome’s appointment, suggesting there are ethical and integrity questions. Chairman Khelef Khalifa, on Wednesday said that the special session held to approve Kroome’s appointment was “highly suspect,” and that Kenyans should be “very wary and alert."

Khalifa added that there are court cases seeking to compel JSC to make public the scores of all the candidates interviewed for the seat.

Koome was appointed as a judge in 2003 and served on the African Union Committee on the Rights and Welfare of Children between 2005 and 2010. According to local outlet Modern Ghana, Koome is a chairwoman of a special task force on children.

Many netizens have also come out to congratulate her on social media.

Koome now faces the task of adjudicating any challenge to the upcoming presidential election, which is scheduled to be held in August 2022.