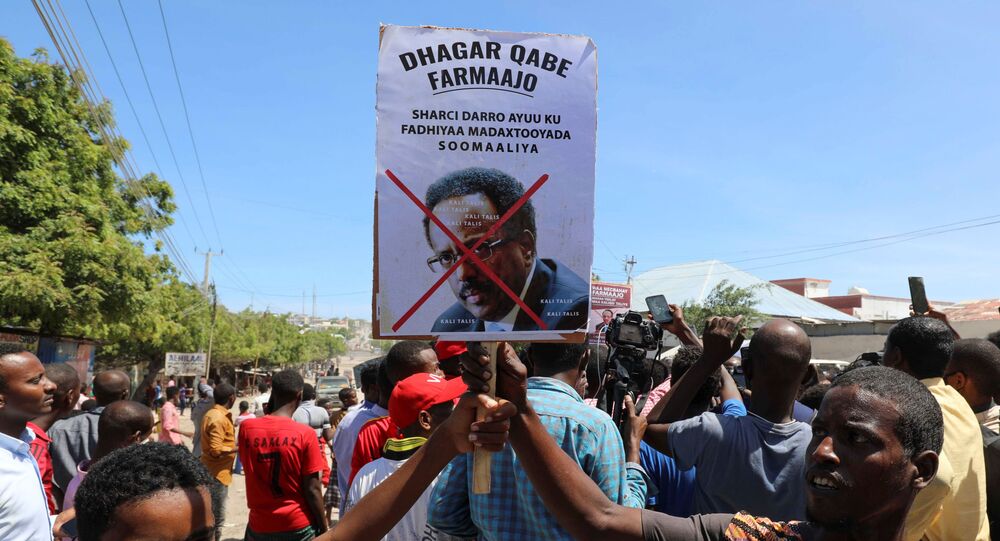 In 2019, Mogadishu began the process of extending new offshore licenses to US-based oil giant ExxonMobil and others, which put their operations on hold after a civil war gripped Somalia decades ago. The hotly contested law permitting oil licenses split Somalia’s five states along similar lines to the recent election debate.

Somalian President Mohamed Abdullahi Mohamed, better known as Farmaajo, has backed away from plans to extend his term for two years amid an intense debate about election structure. The move comes amid intense pressure for all sides to avoid a return to civil war.

After a tense Tuesday in which Farmaajo’s support among Somalia’s five states crumbled and rebellious army troops maintained their positions along some of Mogadishu’s main thoroughfares, the president finally addressed the country around 1 am local time. He announced he would no longer seek the two-year term extension.

Farmaajo told the nation he would appear before the Somali parliament on Saturday to "gain their endorsement for the electoral process" and he urged oppositional forces to join him for “urgent discussions” on how to proceed with the election, which was originally scheduled for December 2020.

"As we have repeatedly stated, we have always been ready to implement timely and peaceful elections in the country," Farmaajo said, according to Agence France-Presse. "I hereby call upon all of the signatories of the 17 September agreement to come together immediately for urgent discussions on the unconditional implementation of the above-mentioned agreement.”

That deal was intended to lay the groundwork for a new indirect election process, but amid a number of intense disagreements about implementation, and in particular how the issue of the self-styled Republic of Somaliland, a breakaway region without international recognition, would be accounted for. As a result, the December election was cancelled and Farmaajo remained in office past his expected February departure.

Earlier this month, the Somali lower House voted to give him a de facto two-year extension so that new elections could be scheduled and the debates resolved, but after Farmaajo signed it into law, Prime Minister Mohamed Hussein Roble came out against the move. The leaders of Galmudug and Hirshabelle, two of Somalia’s five states, also issued a statement Tuesday demanding “an urgent election. Any form of extension should be cancelled.”

The two states, which previously supported Farmaajo’s position on holding this election in the older one-person-one-vote format, joined two other states, Puntland and Jubaland, which have staunchly opposed that method, leaving the president with South-West as the only state supporting him.

According to Reuters, as many as 100,000 people have fled their homes ahead of anticipated violence in Mogadishu, where three people have already been killed in sporadic shooting over the last few days. Troop loyalties have largely fractured along clan lines, mirroring the September election reform that laid out a community-based system of indirect election in which traditional elders and civil society groups would nominate candidates for parliament.

Farmaajo also blamed the crisis on "individuals and foreign entities who have no aim other than to destabilize the country."

In comments posted on social media on Wednesday, Warsame accused Farmaajo of continuing to “plot” with Parliament Speaker Mohamed Mursal Sheikh, noting that the president had not actually rescinded his two-year extension. Warsame urged Roble to seize control of the situation, and said that “in order to reach an inclusive agreement, all the stakeholders have to take part in the talks so [as] to resolve the outstanding issues once & for all.”

While the US has not yet publicly commented on Farmaajo’s speech, Washington was “prepared to consider all available tools, including sanctions and visa restrictions, to respond to efforts to undermine peace and stability in Somalia,” the US State Department said on Monday. Farmaajo has heavily courted the US, inviting US Africa Command to expand its operations against al-Shabaab, an al-Qaeda-aligned militia group that primarily operates in the southwestern Lower Shabelle region.

Although former US President Donald Trump pulled the roughly 700 US troops out of Somalia in December, clandestine ops and airstrikes have persisted. Military Times reported on Wednesday that those troops, now based in nearby Kenya and Djibouti, are “commuting” into Somalia to perform the same missions they were before.