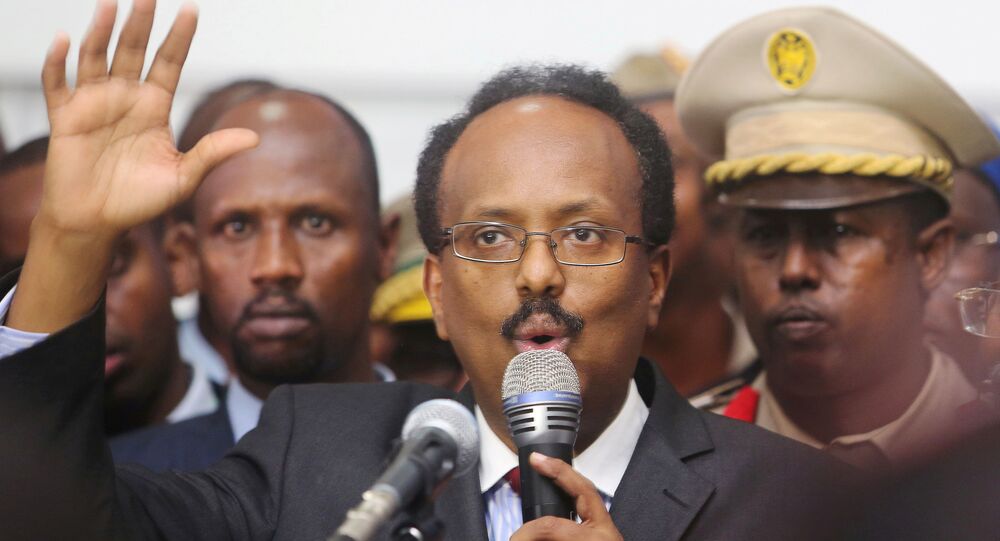 The African Horn nation of Somalia has large mineral and hydrocarbon reserves, including petroleum and uranium, but decades of brutal war and civil war have largely blocked multinational firms from extracting them until fairly recently, when the pro-US government began signing offshore gas exploration deals.

After the lower house of the Somali parliament voted earlier this month to settle an ongoing dispute over election rules and extend President Mohamed Abdullahi Mohamed’s term by two years, dissident groups have moved to oppose him, taking up positions around the capital city.

Mohamed, better known as simply “Farmaajo,” was due to address the nation on Tuesday after Prime Minister Mohamed Hussein Roble sided with two federal states that disagreed with the term extension and some military units took up guard positions in parts of Mogadishu, not all of which are loyal to Roble.

One commander and potential election challenger to Farmaajo, Abdulkadkir Mohamed Warsame, told Agence France-Presse the president “is a dictator” who “wants to stay in power with force.”

“We need a government, not a dictatorship defying the norms of the land,” Warsame said. “We are against that, we will continue fighting until he leaves … We will not stop our fighting - we can stop only when we die."

The news outlet reported that the soldiers were directing residents in certain communities of the capital to leave town ahead of likely fighting. After gunshots rang out the previous night and three security officers were killed, many families had already arrived at the same decision.

Roble decried the violence and has called for calm, urging security forces “not to mingle with politics,” although he also endorsed a joint statement by two of Somalia’s five federal states - Galmudug and Hirshabelle - calling for a cancellation of Farmaajo’s term extension and preparations for a new election to be held.

The parliament’s lower house voted on April 12 for a de facto extension of Formaajo’s term by two years, in an attempt to settle a fierce disagreement over how voting would proceed in that election. Formaajo’s term was due to expire in February. While the five states broadly agreed in September 2020 to change the country’s election system to a more traditional system of indirect elections by which traditional elders and civil society groups choose delegates who are nominated to the parliament, a great deal remains to be hashed out about how exactly the changes would be implemented.

Farmaajo and three of the five Somali states - Galmudug, Hirshabelle, and South-West - thought the December vote should be held according to the old one-person-one-vote system, but Puntland and Jubaland insisted on the newer model, creating an impasse. Parliament’s intervention earlier this month broke the impasse, deciding on a one-person-one-vote for the next election and giving officials two years to organize it.

However, with Galmudug and Hirshabelle now switching sides to oppose the term extension, Farmaajo is quickly becoming bereft of allies.

US to ‘Consider All Available Tools’

Farmaajo is a close ally of the United States, and under his tenure, operations by US Africa Command against the al-Qaeda-aligned al-Shabaab militant group expanded dramatically. He has also overseen the expansion of US and UK oil interests in the region, even appointing the former head of the British-owned Soma Oil and Gas, Hassan Ali Khaire, as his first prime minister.

The bidding is transparent and will be open for a year, he added. pic.twitter.com/Aa4WcfOYTG

​In 2019, the US-based oil giants Shell and ExxonMobil began their return after decades of absence in the face of nonstop regional war and an unstable provisional government, signing a new $1.7 million agreement with Mogadishu to lease five offshore oil blocks for 30 years. Then in February of last year, they arrived at an “initial roadmap” for their expansion, and in May of that year began a new round of licensing for another seven offshore blocks.

According to Offshore Technology, the 2008 Petroleum Law outlining the process for concessions was highly contentious, with Jubaland and Puntland being outvoted and subsequently leaving the licensing process.

The US has, accordingly, backed Farmaajo in the election dispute, and issued a statement decrying the violence and urging “all parties to exercise restraint and to resolve their differences peacefully.”

“The United States is prepared to consider all available tools, including sanctions and visa restrictions, to respond to efforts to undermine peace and stability in Somalia,” US State Department spokesperson Ned Price said on Monday.

On Tuesday, the US embassy in Mogadishu also intervened directly in the ongoing struggle, tweeting about a pre-dawn police raid against an independent media outlet in the capital.

We condemn all attacks on journalists and independent media in #Somalia. Press freedom is fundamental to transparency and accountable governance. #MediaFreedom

​The outlet, Mustaqbal Media, wrote Tuesday that Turkish-trained Haramcad armed officers had smashed up its offices in a 6 am raid, beaten one of its journalists, and seized a slew of recording and broadcast equipment.

“Radio Mustaqbal has been covering the recent developments including gunfight and street protests between security forces backing the federal government of Somalia and military forces backing the opposition - who oppose president Mohamed Abdullahi Farmaajo’s term extension - in Mogadishu since Sunday morning. K4, where the radio locates, is among neighborhoods where both sides clashed on Sunday,” the outlet wrote.

Former US President Donald Trump withdrew all 800 US troops from Somalia in late 2020, but clandestine operations have persisted, as well as airstrikes. Prior to the withdrawal, Somalia held the largest deployment of AFRICOM forces, and the move was hotly contested by AFRICOM leaders and some US lawmakers, who feared shifting US troops away to confront China and Russia would create a vacuum in Africa in which al-Shabaab or Daesh could gain a new foothold.