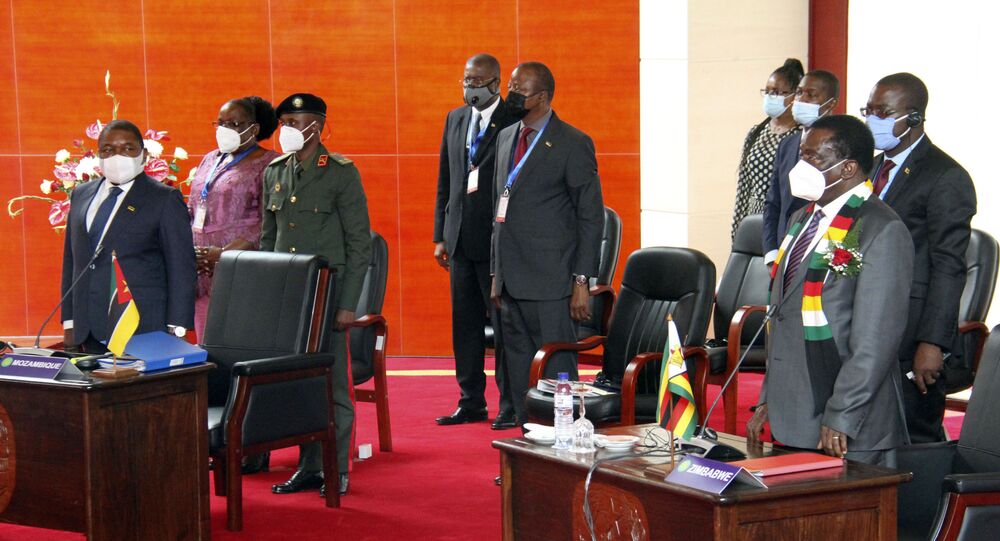 Emergency loans granted to Maputo by the International Monetary Fund (IMF) have come at a steep price: the mandated slashing of Mozambique’s civil service budgets have left its military struggling to handle a growing Daesh*-linked insurgency, prompting the government and international companies to hire private mercenaries.

In the aftermath of a daring assault on the key northern port of Palma by Ahlu Sunna wa Jama (ASWJ), a group pledging itself to Daesh, the government of Mozambique has begun reconsidering its position on refusing help from foreign governments. Leaders of the Southern African Development Community (SADC) met last week in the Mozambican capital of Maputo at the country’s extreme southern tip and promised an “immediate technical deployment” to the country.

“We know in which areas we need support and which areas are up to us, Mozambicans, to solve,” Mozambican President Filipe Nyusi, who is also the rotating chair of SADC, said Friday during a nationwide TV address. “Those who arrive from abroad will not replace us, they will support us. This is not about pride, it’s about sovereignty.”

Nyusi has spoken little since on what exactly that means. However, Zimbabwean President Emmerson Mnangagwa told the Zimbabwe Mail after the meeting he thought SADC’s Force Intervention Brigade (FIB) should be “resuscitated and capacitated immediately so that it can intervene.” The force, originally created in 2013 as the United Nations Organization Stabilization Mission in the DRC (MONUSCO), is composed entirely of troops from South Africa, Malawi and Tanzania.

Maputo has also slowly bowed to insistence by the US and Portugal, the former colonial power that ruled Mozambique until 1975, to provide small amounts of assistance in the form of training. In December, Portugal and Mozambique signed an agreement to deploy nearly 1,500 Portuguese troops to the country this year, although it’s unclear what their role will be. Last week, defense officials confirmed to Lusa Agency that 60 special forces in a training capacity in the aftermath of the Palma attack.

US Africa Command (AFRICOM), facing pressure from the Pentagon’s strategic shift toward “great power competition” with Russia and China, has rushed to defend its missions in Africa by pointing to the continuing danger of radical Muslim militias in Somalia, West Africa, and elsewhere, arguing that in their absence, these groups will continue to grow. As a consequence, training local forces under the 127 Echo program has become a new focus.

Eric Morier-Genoud, a professor at Queen’s University Belfast in the UK, told Al Jazeera on Friday that the Mozambican government “does not want foreign boots in Mozambique, and it wants to keep in control and in command of any other interventions, whether military or humanitarian.”

ASWJ is called by locals al-Shabab (“the youth”), although it has no connection to the Somali group of the same name. The group arose in Mocimboa da Praia, a town in Mozambique’s far northern province of Cabo Delgado among the country’s Muslim minority in 2014. Although new to Mozambican Islam, scripturalist Wahabbist preachers trained in Saudi Arabia and backed by the Portuguese have steadily increased their sway since the 1970s. In the 21st century, they have become more direct in their encouragement for local families to divest from the secular government’s services.

The first violent attacks on police forces began in 2017, but little is known about the group’s internal structure since it doesn't publish information about itself or even political declarations. Since then, more than 2,500 people have been killed and more than 700,000 people have fled from the conflict.

© AP Photo / AMAQ
In this image taken from militant video released by the Islamic State group on Monday March 29, 2021, purporting to show fighters near the strategic north eastern Mozambique town of Palma, as the militant group claimed it had taken control of the area after five days of conflict.

More than 1,500 miles from Maputo, Cabo Delgado is among the country’s poorest areas, although as the cradle of the socialist revolution led by Nyusi’s Liberation Front of Mozambique (FRELIMO), it has until recently been one of the most loyal provinces as well. Social services, infrastructure, and education all run in short supply, but some things are plentiful, with natural gas and rubies being the foremost.

The London-based Financial Times stated recently in no uncertain terms what it sees as being at stake in the al-Shabab uprising. “A multibillion-dollar gas development in Mozambique, the single biggest investment in Africa, faces renewed threat after an Islamist insurgent assault forced Total to suspend work for a second time this year,” the paper wrote on March 28, when the assault on Palma began.

Total, a French gas corporation, has pumped $20 billion and US-based ExxonMobil has put $30 billion into vast complexes of gas facilities in Cabo Delgado, including liquefaction plants, in the Rovuma Basin. Mozambique has Africa’s third-largest gas deposits, after Nigeria and Algeria.

Similarly, the UK-based company Gemfields operates a huge ruby extraction site at Montepuez, which produces 40% of the world’s rubies. The company agreed in 2019 to pay $7.8 million in damages to local residents in a “no admission of liability” settlement on a claim Gemfields had systematically brutalized its workers, subjecting them to physical and sexual abuse, and even murder.

French non-governmental organization Les Amis de la Terre France noted in 2019 how these projects have helped fuel discontent in the region that al-Shabab has happily exploited. “The militarization of the area and gas activities contribute to fuel the tensions that feed it. Human rights violations are on the increase in communities, caught between insurgents, private military and paramilitary forces, multinationals or their subcontractors,” they wrote. Thousands of families have been evicted by the gas and ruby extraction projects.

Nearly three decades of continuous war, including the war of independence and civil war that formally ended in 1992, have left the former Portuguese colony severely impoverished and dependent on foreign loans, particularly from the IMF, to pay its bills. As a condition and consequence of those loans, Maputo has imposed budget cuts so severe they have left its own military unable to deal with the al-Shabab uprising, according to the Black Agenda Report.

However, the IMF’s restructuring rules allow spending on private military contractors, to whom Maputo has turned to fight the insurgency, including the Dyck Advisory Group, Wagner Group, Eric Prince’s Frontier Services Group, and others. Total and ExxonMobil have also hired their own mercenaries to defend their LNG facilities in Cabo Delgado.

Amnesty International noted in a report last month based on local testimonies how much the contractors have exacerbated the problem in Cabo Delgado by indiscriminately killing and abusing civilians. The report also described atrocities by the Mozambican forces present as well as by al-Shabab.