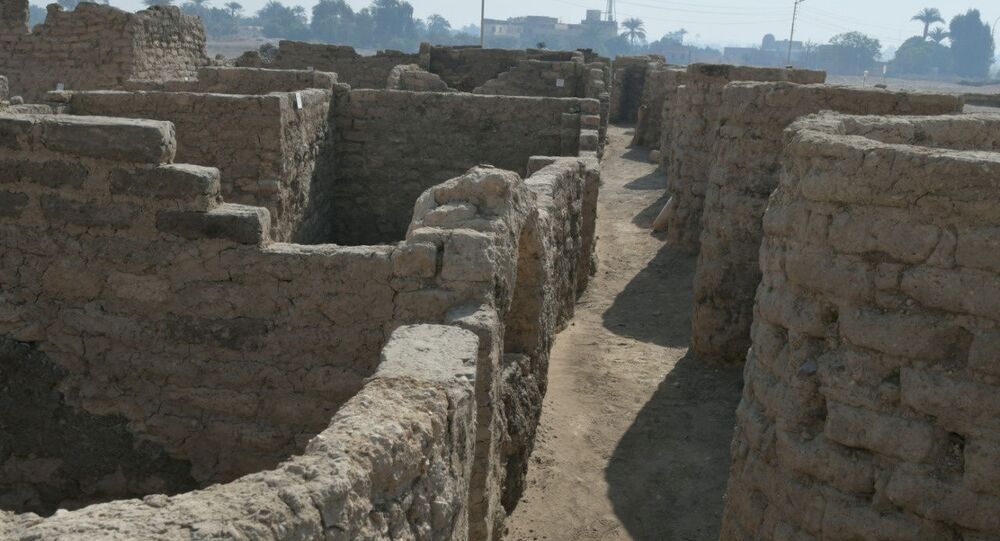 In Luxor, Egypt’s Valley of the Kings in 1922, archaeologists unearthed the tomb of Tutankhamun, the boy king more widely known as King Tut. At the time, it was described as the biggest archaeological discovery in history, but was referred to by Howard Carter’s excavation team as the unleashing of the “Pharaoh’s curse.”

Once again, Luxor is the center of archaeological discovery after Egypt’s Ministry of Tourism and Antiquities announced on Thursday the discovery of what it has been dubbed the “Lost Golden City.”

After seven months of excavation, a mission led by Dr. Zahi Hawass, Egypt’s former antiquities chief, unearthed “several areas or neighborhoods” excavators believe to be a part of a 3,000-year-old city.

Jewelry such as rings have been discovered at the dig site, along with pottery vessels, scarab beetle amulets and mud bricks bearing seals of Amenhotep III which prove that the city dates back to the era of the 18th dynasty king, who ruled Egypt from 1291 to 1353.

The city was co-ruled with Amenhotep III’s son Akhenaten who eventually abandoned the city after assuming the throne. Hawass, a world-renowned archaeologist who has been entangled with corruption allegations, calls the latest discovery “the Rise of Aten.”

A statement released by Egypt’s Ministry of Tourism and Antiquities indicates that the excavation area “was the largest administrative and industrial settlement in the era of the Egyptian empire on the western bank of Luxor."

According to the Thursday post, the southern part of the city is said to have a bakery, ovens and storage pottery, while the northern part comprises administrative and residential districts that include houses with walls measuring up to three metres high.

"What they unearthed was the site of a large city in a good condition of preservation, with almost complete walls, and with rooms filled with tools of daily life," the ministry’s release states.

Betsy Bryan, a professor of Egyptian art and archaeology at Johns Hopkins University, told ABC News the find was the second-most important archaeological discovery since the tomb of Tutankhamen.

Last week, the mummy of Amenhotep III, his wife Queen Tiye and 20 others were transported across Cairo from the Egyptian Museum to the new National Museum of Egyptian Civilization in a procession called the “Pharaohs’ Golden Parade.”

The Curse of King Tut’s Tomb

In an attempt to bring tourism back to the African country, Egypt has faced a slew of bad luck that some have chalked up to the “Pharaoh’s Curse,” an alleged hex that links back to an inscription found on Tutankhamun's tomb. The engraving states that "death shall come on swift wings to him that toucheth the tomb of the pharaoh."

Of course, this is just speculation. Hawass previously told ABC News that "the curse is a myth, and the inscription they speak about is non-existent."

However, what is real are the series of unfortunate events that Egypt has recently experienced: a Suez Canal blockage which disturbed the global markets for almost a week; two train collisions; a garment factory fire; and a residential building collapse, all which came closely after Egypt’s announcement of their Golden Parade.

Whether one believes in curses or not there is an ongoing debate over archaeological discoveries that often result in the permanent untombing of most sacred burial sites. In the statement from Egypt’s Antiquities Ministry, it confirms that those involved in the mission of unearthing the Golden City say they wish to continue their work to “uncover untouched tombs filled with treasures.”