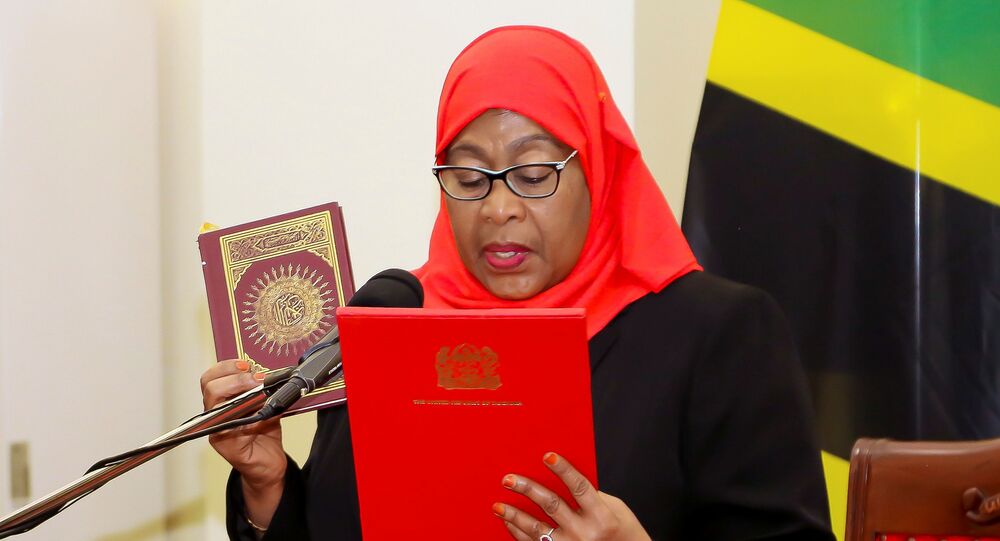 John Magufuli, the fifth president of Tanzania, died on 17 March after weeks of absence. Magufuli, a well-known COVID-19 sceptic, was rumoured to have fallen victim to coronavirus but his vice president said that the politician had died from a heart attack.

Samia Suluhu Hassan was sworn in as Tanzania’s president on Friday, making her the first female to become the head of state in the country, following death of the nation’s former ruler John Magufuli.

Hassan, the 61-year-old Muslim politician who had served as vice president under Magufuli, confirmed on Wednesday that her former boss had died from a heart attack at Mzena Hospital in Dar es Salaam that morning. Magufuli has not been seen in public since 27 February, sparking rumours that he had been stricken with COVID, despite his previous denial of the severity of the virus’ impact. Tanzania’s officials moved to dismiss “fake” speculations about Magufuli’s state of health.

Upon taking the office on Friday, Hassan announced a 21-day period for mourning Magufuli’s death and a public holiday on 25 March, when he will be buried. Tanzania’s new president said that her teacher’s death had left a “wound in her heart.”

"Today I have taken an oath different from the rest that I have taken in my career. Those were taken in happiness. Today I took the highest oath of office in mourning,'' Hassan said during the oath-taking ceremony with the Quran in her right hand.

Who is Tanzania’s First Female President?

Samia Suluhu Hassan will become the country’s first president to have been born in Zanzibar, a semi-autonomous region which constitutes part of the united Republic of Tanzania.

The politician is a member of the ruling party Chama Cha Mapinduzi, who won the vice presidency in 2015 on the CCM’s ticket and was re-elected to a second term in 2020 alongside Magufuli.

© REUTERS / STRINGER
Tanzania's new President Samia Suluhu Hassan inspects a guard of honour mounted by the Tanzania Peoples Defense Forces after she was sworn into office following the death of her predecessor John Pombe Magufuli at State House in Dar es Salaam, Tanzania March 19, 2021
Hassan was born in 1960 in the Sultanate of Zanzibar, an Islamic state which existed from 1856 until 1964. She gained her diploma in public administration in 1986 and eight years later graduated from the University of Manchester with a postgraduate diploma in economics, and later MCs in Community Economic Development.

The woman’s professional career begun in 2000 with her election as a special seat member to the Zanzibar House of Representatives. She was also later appointed as a Minister of Tourism, Trade and Investment and a Minister of Labour, Gender Development and Children by the country’s ex-president Amani Karume. In 2010, she won election in parliamentary consistency of Makunduchi for the National Assembly by over 80%.

Since November 2010, Hassan also served as the Minister of State for Union Affairs under the country’s fourth president Jakaya Kikwete. As the Vice Chair of the Constituent Assembly, she was overseeing the drafting of Tanzania’s new constitution.

Following Ethiopia’s President Sahle-Work Zewde, Hassan became the second serving female head of state on the African continent. Her political style was so far described as “soft” with an aim to build consensus among the country’s political establishment, but only time could tell.

“Nothing shall go wrong,” the new president said upon her inauguration. “This is the time to stand together and get connected. It's time to bury our differences, show love to one another and look forward with confidence.”