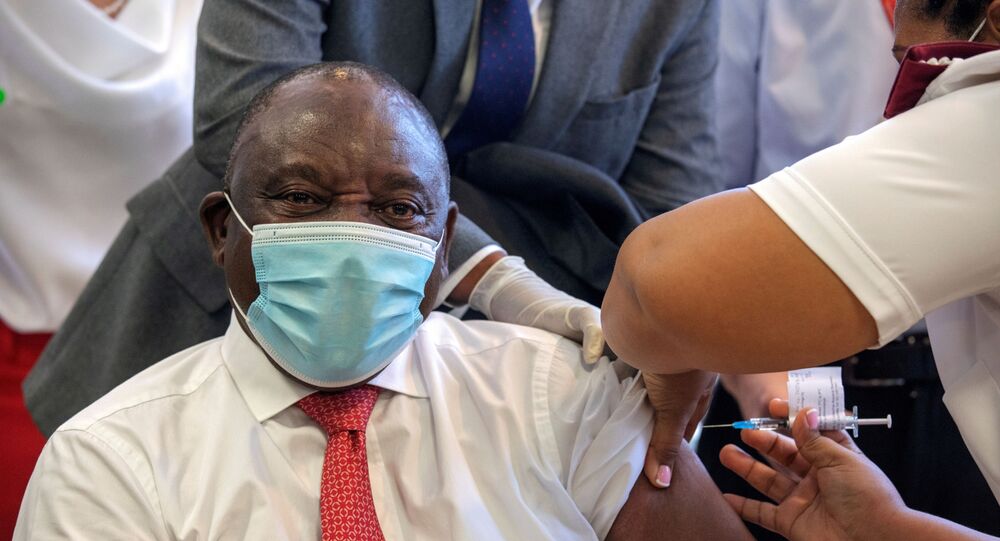 South African drug regulator SAHPRA Chairwoman Helen Rees let slip that the US-made Johnson & and Johnson coronavirus vaccine's usefulness against the virulent "South African" strain was unknown, and that a mass trial on some half-a-million healthcare workers was meant to find out.

Executives at South Africa's medical regulator have attacked the government for dubbing a mass trial of a US-made COVID-19 vaccine a "roll-out" — and using health workers as "guinea pigs".

"The president is reporting in parliament about a 'roll-out' of the J&J vaccine. Can the current 3B clinical trial be termed a rollout?" one asked in a post seen by the Independent Media group.

Rees responded: "The reason it's a 3B study is that the first vaccines are a donation from J & J and were manufactured for the phase 3B trial. We will generate more safety and efficacy data by doing this in the context of our variant."

Rees' comment indicated that the trial was intended to tests the new vaccine's effectiveness against the more-transmissible 501.V2 strain of coronavirus, which is dominant in South Africa — implying that it was so far unknown.

A doctor who spoke anonymously to the Independent confirmed that, saying: "After the initial trial, they had to find a new cohort to test the new strain, meaning they had to do more tests to see if it would be effective against the new strain/variant."

Two un-named board members reacted angrily to the revelation that South Africa's healthcare workforce was being used like laboratory rats to test the new jab, which SAHPRA is yet to approve for general use.

"They must stop misleading our people and allowing them to be used as guinea pigs," one said. "This is a clinical trial and not a rollout. The vaccine is still yet to be registered in South Africa."

Another echoed those concerns — and questioned why non-medical staff had received the vaccine as the trial along with Ramaphosa and health Minister Zweli Mkhize.

"We know there was a protocol deviation application to include the president and his deputy, but now we understand that even administrative secretaries have been vaccinated," they said.

The US Food and Drug Administration reportedly approved the J & J vaccine for "emergency" use on Saturday, despite the firm admitting several South African test subjects had suffered severe allergic reactions to it. Earlier that day South Africa received its second batch of 80,000 doses of the vaccine from Belgium, to be used in a mass clinical trial of up to 500,000 healthcare workers.

© REUTERS / POOL New
South African President Blocked UK and Russian COVID-19 Vaccines to Help Campaign Donor - Report
Ramaphosa has been accused of blocking the use of a million doses of the AstraZeneca Oxford jab bought from India in favour of the J & J vaccine after its South African licenced producer gave him millions in campaign donations.

South African Medical Research Council president Professor Glenda Gray, an advocate of the J & J jab over the Oxford vaccine, admitted the president was "wrong" to hail the trial as a "roll-out".

"We have always stressed that this was a phase 3B label study or early access program until the J & J vaccine is registered in South Africa,” Gray said.