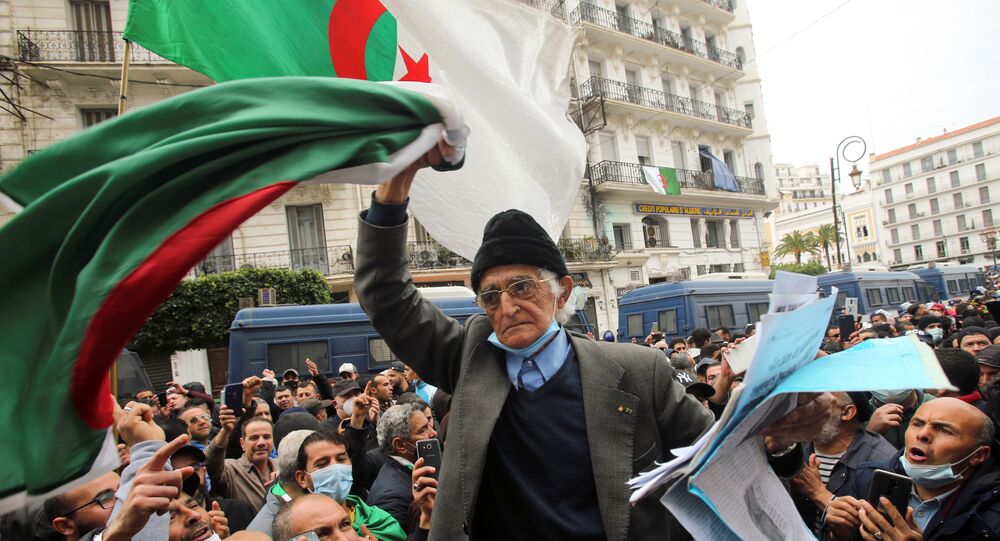 During Algeria’s 2019 Hirak protests, the largest demonstrations were typically held on Tuesdays. While the COVID-19 pandemic put a damper on last year’s protests, in 2021 they seem to be far better organized as they attempt to revive the movement.

Two years after Algerians took to the streets in massive numbers to demand then-President Abdelaziz Bouteflika resign, they are protesting once more.

Huge protests erupted in Algiers on Monday, the largest since the beginning of the COVID-19 pandemic in early 2020, which put a damper on mass organization. The date was exactly two years since the huge February 22, 2019, protests began that forced Bouteflika from power after two months of demonstrations.

Like the original “Hirak” (Arabic for "movement"), Monday’s protest was preceded by a smaller demonstration a week prior. According to Reuters, about 5,000 demonstrators protested on February 16 in Kherrata, a town east of the capital of Algiers where the Hirak began in 2019. They chanted  “A civilian state, not a military state,” and “The gang must go,” among other slogans. They waved both the national flag of Algeria and the flag of the Imazighen people, who are indigenous to Algeria and the Sahara region and the country’s largest non-Arab ethnic group.

“We came to revive the Hirak that was stopped for health reasons,” a protester named Nassima told Reuters last week. “They didn’t stop us. We stopped because we care for our people. Today, coronavirus is over and we will get the Hirak back.”

​Monday’s demonstrations were much larger and saw widespread clashes with police, who set up security checkpoints around the capital and attempted to block the crowds from gathering around the Grand Post Office, the epicenter of the 2019 protests. Demonstrations also took place in Annaba, Oran, Setif and Mostaganem. At least 59 people were arrested across the country, including 26 in Algiers, according to Agence France-Presse.

​Ahead of the anticipated mass protests, Algerian President Abdelmadjid Tebboune reshuffled much of his cabinet, removing the ministers of energy, security and the environment, as well as merging the energy and oil ministries. Several prominent protesters who had been arrested in connection with the 2019 demonstrations were also released. Additionally, Tebboune dissolved parliament to begin the process of new legislative elections. However, with Prime Minister Abdelaziz Djerad and Justice Minister Belkacem Zeghmati, two of the targets of protests, retaining their posts, some in the streets reportedly saw little substance in Tebboune’s moves.

"The reshuffle doesn't interest me, it's the same old people," Zaki Hannache, a 33-year-old activist, told AFP on Monday. "Same thing with parliament, the new ones (deputies) will work, like the current regime, for their own interests, not for the people."

Thousands of people gathered in #Algiers on Monday, to mark the second anniversary of the #Hirak 2019 protest movement.#Algeria pic.twitter.com/zBOqGbsdpi

​Tebboune was appointed president after the December 2019 elections in which he ran as an independent, despite having served in several National Liberation Front (FLN) governments, including Bouteflika’s. The FLN has held power since it led the country to independence in the 1954-1962 anti-colonial war. Last month, the office of French President Emmanuel Macron said Paris would not apologize to Algiers for its 132 years of brutal colonial rule, including the brutalities of the war of independence, but would instead support a “Memories and Truth” commission to promote reconciliation with the past.

After a catastrophic civil war in the 1990s, the FLN re-established control under Bouteflika, who had ruled the country since 1999. While the state of emergency officially ended in 2011 in the wake of protests inspired by the Arab Spring, the prominence of the military and the tendency of an “old guard” to retain positions of power in the name of preserving unity helped drive the 2019 protests, when Bouteflika announced he intended to pursue a fifth term as president.