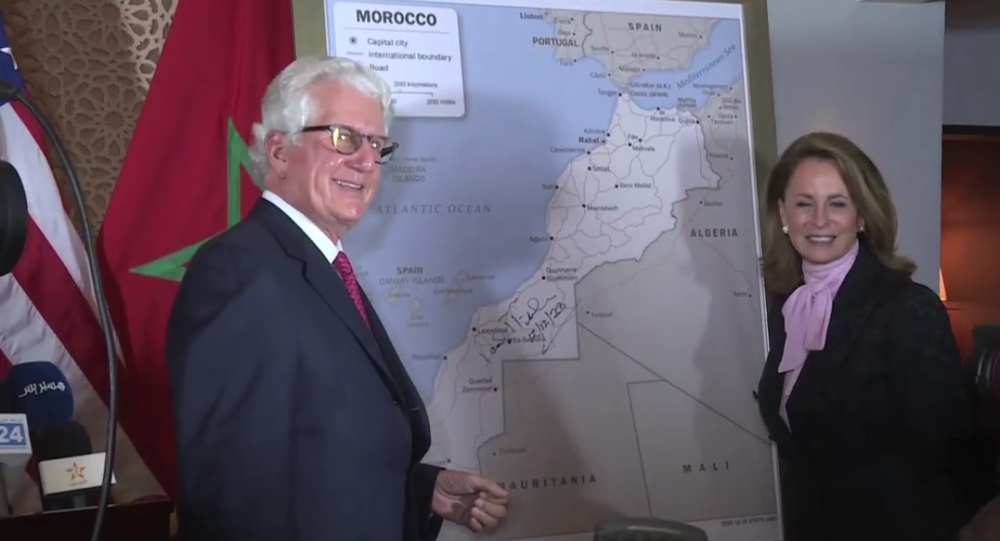 The previous Trump administration bargained several Arab states into normalizing relations with Israel, but now that US President Joe Biden has taken office, some of those benefits, such as F-35 fighters potentially being sold to the United Arab Emirates, have been walked back.

“The abrupt decision by the previous administration on December 11, 2020, to officially recognize the Kingdom of Morocco’s illegitimate claims of sovereignty over Western Sahara was short-sighted, undermined decades of consistent US policy, and alienated a significant number of African nations,” the lawmakers wrote, led by Sens. Jim Inhofe (R-OK) and Patrick Leahy (D-VT).

“We respectfully urge you to reverse this misguided decision and recommit the United States to the pursuit of a referendum on self-determination for the Sahrawi people of Western Sahara,” they added.

“The fate of the Sahrawi people has been in limbo since the United Nations first adopted a resolution calling for a referendum on self-determination in 1966. For more than five decades following the United Nations’ action, the simple and fundamental goal of the Sahrawi people to freely decide, for themselves, their fate has been stymied and subjected to broken promise after broken promise,” the letter notes.

“The United States owes it to the Sahrawi people to honor our commitment, to help ensure the Moroccans live up to theirs, and to see this referendum through. The Sahrawi people deserve the right to freely choose their own destiny.”

The December decision was part of a deal by which Morocco also agreed to normalize relations with Israel, the last of several Arab nations to do so following promises of Washington largesse. However, even staunch supporters of Israel in Washington criticized Trump’s decision, which also invited denunciations by several US allies and other world powers, such as Russia.

In November, a 29-year peace between Morocco and the Polisario Front, which the UN recognizes as the legitimate representative of the indigenous Saharawi people, was called off after Moroccan troops attacked a sit-in demonstration by Saharawi activists at a crossing on Western Sahara’s southern border with Mauritania. Following the outbreak of war, Moroccan police cracked down on Saharawi activists in Morocco and the parts of Western Sahara Morocco controls, besieging their houses, beating them, and throwing them in jail.

Omeima Abdeslam, the Polisario Front representative to Switzerland, told Sputnik in December that Trump’s move “has [made] the Saharawis more united and more persistent to get their independence by all means, including the armed struggle ... and will not end until total independence.”

On Saturday, Moroccan police attacked the home of Saharawi human rights activist Sultana Khaya, beating her and her sister, Elwaara, which sparked a series of protests in Western Saharan cities in the days after.

Unique among UN mandates, the UN Mission for the Referendum in Western Sahara (MINURSO) has no human rights monitoring mechanism, which Saharawi activists have long demanded, saying it gives Moroccan security forces free reign to violate their rights.

The US lawmakers called attention in their letter to Morocco’s repeated attempts to frustrate negotiations for holding the promised independence referendum, noting Rabat “effectively walked away from the negotiations” in 1998, “declaring they would never accept a referendum that included independence as a potential outcome, despite years of promises otherwise.”

“Tragically, Morocco’s unwillingness to negotiate in good faith has been a consistent theme over the years,” they added. “The previous administration’s decision to recognize their claims has only served to reward decades of bad behavior by the Moroccan government.”

Before 1975, the territory was the Spanish colony of Spanish Sahara, but when the Spanish left, Morocco and Mauritania both laid claim to the land. However, the Saharawis declared their own Saharawi Arab Democratic Republic and their forces soon pushed Mauritania out of the country while fighting Morocco until a 1991 peace deal. The harsh desert terrain holds rich deposits of phosphates, and just off the coast sit valuable fisheries and, it is believed, petroleum deposits beneath the seafloor.