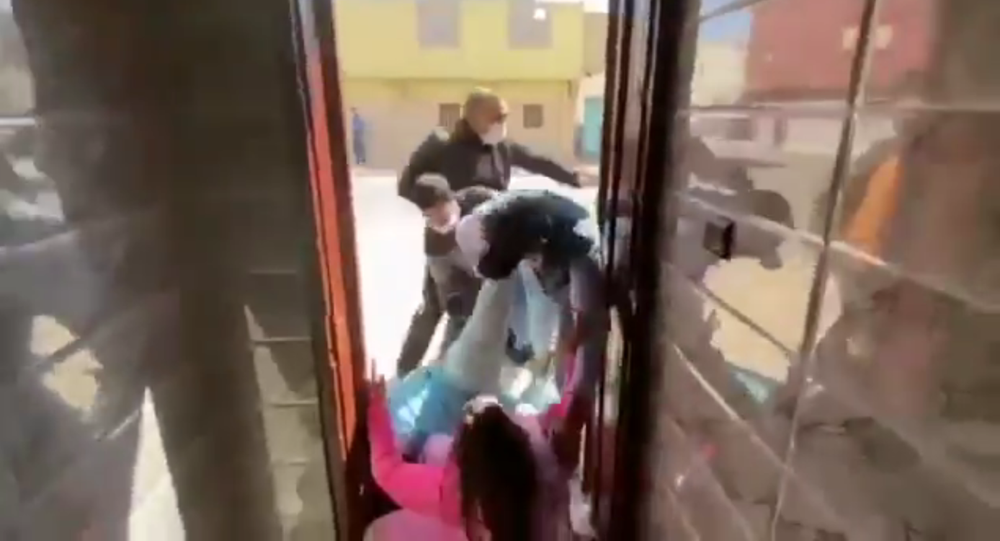 Saharawis and their supporters have long decried the unique situation of MINURSO, the United Nations mission to Western Sahara, as the UN’s only mandate that lacks a human rights monitoring mechanism.

Journalists in the Western Saharan capital of Laayoune have reported a dramatic increase in Moroccan police and military units after police brutally attacked a Saharawi activist, sparking widespread demonstrations.

Equipe Media posted a video recorded in the northern city of Laayoune on Tuesday, showing widespread deployment of police units, which the outlet describes as a “military siege .. to face any type of protests that may arise.”

​On February 13, Moroccan police were reported to have “brutally attacked” Saharawi human rights activist Sultana Khaya and her sister, Elwaara, at their home in the coastal city of Bojador. According to Sahara Press Service, the two women were beaten by police, with Soltana suffering a serious eye injury and Elwarra’s jaw being broken after being hit with stones.

Footage captured during the incident shows Elwaara clinging to her front door as plainclothes Moroccan security forces drag her from her house.

Warning: the videos below may be disturbing to some viewers

​Protesters subsequently skirmished with police outside Khaya’s home in the following days, after they came to show their support for the activists. “Abandoned by the international community, Saharawi youth flock to Sultana's home in show of solidarity,” media collective Saharawi Voice tweeted on Monday, adding that “these events are illegal in occupied Western Sahara."

NEW: Saharawi youth flock to the home of human rights defender Sultana Khaya in Boujdour, occupied Western Sahara. She has been brutally beaten, along with her sister and mother by Moroccan police, her home surrounded by Moroccan military. Saharawi youth are there in solidarity. pic.twitter.com/pp1TtOIpJt

​Soltana told SPS the attack was "the price to pay for the struggle, and I knew I had to pay the price. I was prepared for it, still I am, and perhaps even more so now than ever.”

The activist is no stranger to police repression: during widespread student protests at Moroccan universities in 2007, Khaya was beaten and arrested during a sit-in demonstration in Marrakech, resulting in the loss of an eye, Reuters reported at the time. After widespread protests swept Morocco and Western Sahara in November and December, police raided Khaya’s house and beat her 84-year-old grandmother before establishing a continuous watch outside, blocking people from leaving or entering the premises, she told Human Rights Watch.

Peace activists in Western Sahara have attracted significant police attention in recent months, since the Saharawi Arab Democratic Republic’s (SADR) government-in-exile called off the 29-year peace with Morocco and resumed its fight for independence. Morocco has claimed the territory as its own since Spanish colonizers left in 1975, but the indigenous Saharawi people declared their own republic and appealed to the United Nations for support. In a 1991 peace deal, the UN agreed to facilitate an independence referendum for the territory that has never materialized.

In December 2020, the US agreed to recognize Morocco’s claims over Western Sahara in exchange for Rabat’s normalization of relations with Israel, sparking additional protests as even the most adamant neoconservatives criticized the Trump administration for shredding the rights of Saharawis.

Abdallah Souilem, the SADR’s charge d'affaires of what SADR calls the “occupied territories,” told SPS on Wednesday that the" degraded human rights situation in the occupied Sahrawi cities portends a humanitarian catastrophe if the international community does not intervene to dissuade the Moroccan regime.”

Souilem noted that other activists have been harassed as well, including Alina Aba Ali, who was forced to flee the country; Mohamed Salem Ayad Lefkir, whose recent murder was the subject of an attempted coverup at a Laayoune morgue; and Saharawi detainee Mohamed Lamine Abidine Hadi, who has been on a hunger strike in Tiflet 2 prison since November.

On Thursday, several US lawmakers penned a bipartisan letter to US President Joe Biden urging him to reverse former US President Donald Trump’s decision to recognize Morocco’s claim, saying the move “served to reward decades of bad behavior by the Moroccan government.”