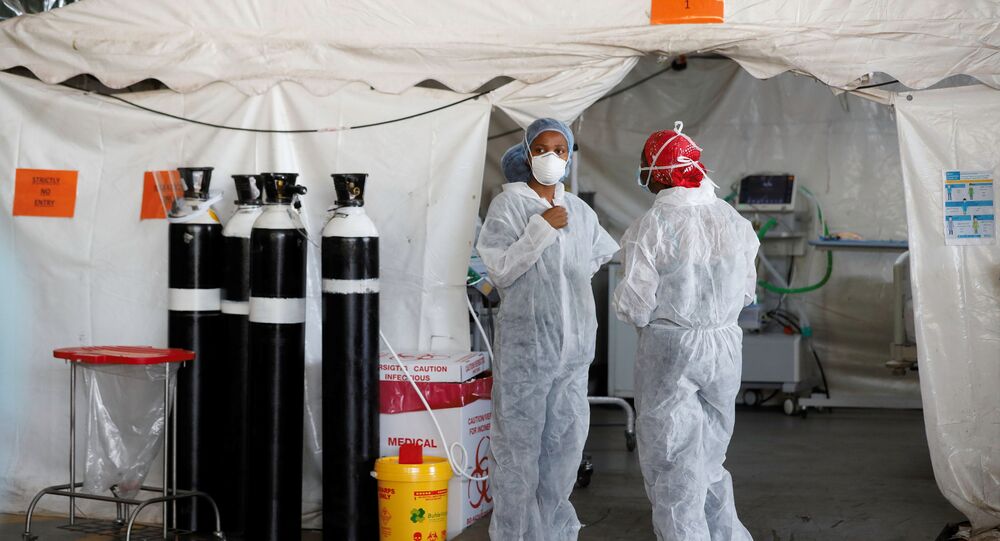 South African medical regulators have not approved Heberon Interferon-Alpha-2 or similar drugs for use in coronavirus patients, and have so far only licensed one brand of vaccine against the deadly disease — with supplies yet to reach the country.

South Africa's elite police unit has launched a probe into reports of an armed stand-off between soldiers and its officers in a raid to confiscate life-saving COVID-19 drugs.

"It was really tense and a minister had to be called before the Hawks stood down and left,” a source told the South African Sunday Times.

The Hawks and SAHPRA were reportedly trying to seize 200 million rand ($13.4 million, £9.8 million) worth of the anti-viral drug Heberon Interferon-Alpha-2, which the army had purchased and imported independently from Cuba late last year to treat its own personnel suffering from coronavirus.

SAHPRA has refused to license the drug for use in coronavirus patients. The regulator has also "discouraged" the use of another potential COVID-19 drug, ivermectin, outside of clinical trials, and has so far only approved the Covishield COVID-19 vaccine — the Indian licensed production of the AstraZeneca Oxford vaccine — for South African residents.

Hawks spokesperson Lieutenant-Colonel Philani Nkwalase said he was not "aware" of guns being drawn during the confrontation.

“What we can confirm is that three of our junior officers had gone there, accompanying members of SAHPRA who wanted access to some medication that was there," Nkwalase said. “The national head of the Hawks, Godfrey Lebeya, had ordered an investigation as to what transpired there.”

South African National Defence Force (SANDF) head chaplain Brigadier-General Monwabisi Jamangile said his officers were forced to "lead troops to the grave" while the government fails to secure supplies of vaccines and drugs against the deadly virus.

“It is with a heavy heart, extremely painful and with deep sadness that chaplains continue to lead troops to the grave, whilst reliably informed that there are means that lives of the soldiers can be saved in order for them to be able to carry out their constitutional mandate of protecting and defending the integrity of this country," Jamangile said in a statement.

South Africa only received its first shipment of 1 million doses of Covishield on Monday, after initially relying on the Bill Gates-funded Covax scheme which may not deliver until the end of June. Despite being a member of the BRICS bloc of leading emerging economies, the health ministry has yet to announce orders for the Sputnik V or Sinovac jabs from fellow-members Russia and China.

The South African Communist Party (SACP), an ally of the ruling ANC with several members in the cabinet, backed the SANDF in the row.

"SAHPRA embarked on a path to seek to destroy the medicine, literally," after the Military Health Services had already used it to save lives, SACP Spokesman Alex Mashilo said. "The last thing that South Africa needs is a military compromised by disease."

Mashilo pointed out that there was “a large body of scientific evidence globally that the Cuban-developed Heberon Alfa R (Interferon Alpha-2B) has been used successfully for over 30 years," adding that it was "approved around the world for the treatment of numerous diseases, including several cancers.”

© CC0
South African Liquor Traders Welcome Partial Lift of Sales Ban
But main opposition party, the liberal Democratic Alliance (DA), attacked the SANDF, repeating claims by the Times that the medicines were paid for out of funds earmarked for training and that almost half the supply was not properly refrigerated and thus spoiled.

“It seems clear that the procurement was deliberately done in a crooked manner and that the Military Command Council is trying to squeeze themselves out of the tight spot it created," said DA shadow defence minister Kobus Marais. “Even if Interferon Alpha-2B should prove to be an effective measure against Covid-19, SANDF ruined nearly 40 per cent of the stock due to sheer incompetence in ensuring that the drugs' cold-chain supply was adequately managed."