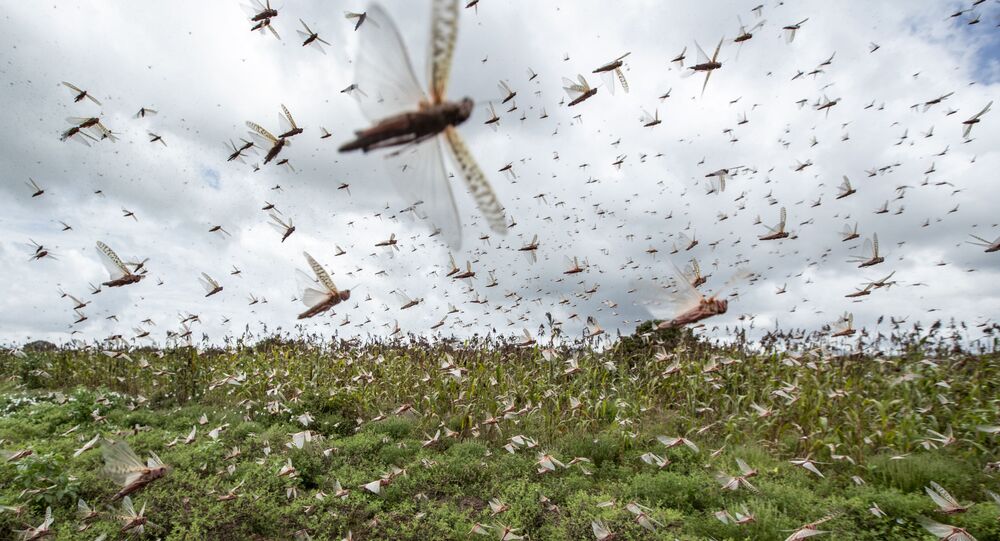 Catastrophe in 3,2,1: UN Food Agency Seeks Help as it Warns of Locust Invasion in Africa

The agency said even a very small swarm of locusts is able to eat as much food in a day as would feed about 35,000 people. Therefore, for countries which experience food shortages an invasion of these insects constitutes a national catastrophe.

The UN Food and Agriculture Organization (FAO) is asking for $38 million to continue work in Ethiopia, Kenya and Somalia as it warns of another locust invasion in East Africa. The agency previously said that the outbreak, which occurred in 2020, was the worst crisis in decades and further outbreaks pose a potential threat to the food security of another 20.1 million people.

According to FAO’s report, the immature insects continue to arrive and disperse through Ethiopia, Kenya and Somalia, where in 2020 11.9 million suffered acute food insecurity. The agency said if it rains in the coming weeks, the crop-munching insects will spread further in order to mature and lay eggs.

"The swarms could continue to central Kenya and perhaps a few swarms could reach the equatorial region in the southeast corner of South Sudan as well [as] in eastern Uganda", said Keith Cressman, a senior locust forecasting officer at the FAO.

So far the FAO has sprayed 1.6 million hectares with pesticides to protect the crops. According to Cressman, this size of land is enough to feed 21 million people for a year.

As mentioned earlier, the agency is looking for $38 million to "support rapid control actions as well as prevent a deterioration in the food security situation and protect livelihoods".

.@FAO's collective efforts against the desert locust upsurge in the Horn of Africa and Yemen have protected an estimated 2.9M tonnes of cereal, enough to feed almost 20M people for a year.

​The 2020 invasion of locusts resulted in catastrophic destruction with insects destroying tens of thousands of hectares of cropland and pasture in Africa alone.

Stephen Lekipasharan a farmer from Isiolo county in Kenya, said that the 2020 invasion was so terrible he had to flee to a neighbouring county.

"They devoured every bit of green vegetation in their path, leaving the land desolate. We had to escape to neighbouring Laikipia county with our animals to save our lives," Lekipasharan said.