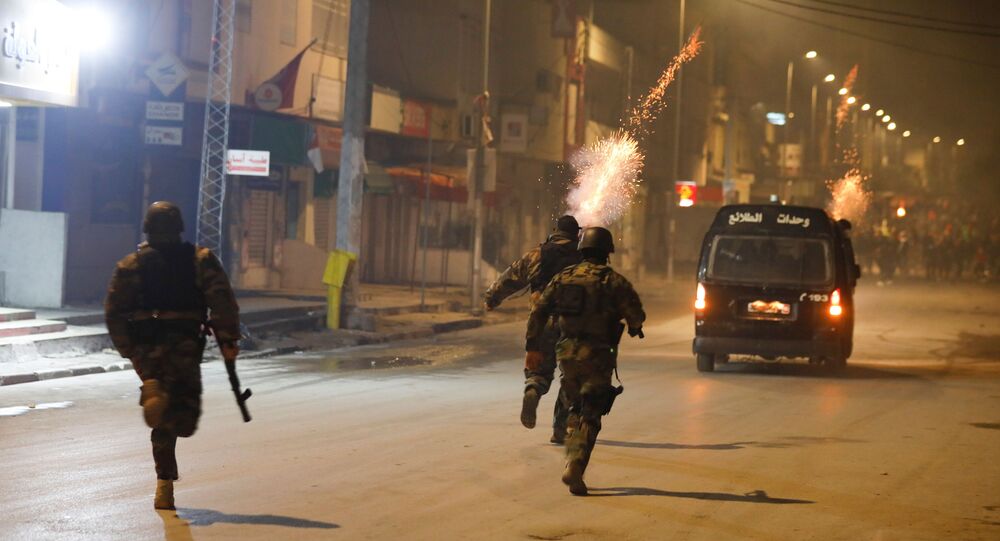 Unrest in Tunisia: What to Do, Who to Blame?

Tunisia has seen mass protests in the past three days over deteriorating living and economic conditions. The unrest has escalated into riots and clashes between security forces and protesters. The protests were mainly attended by young people under 25, many of whom turned out to be minors.

The protests have spread to the capital and parts of Sousse Governorate, as well as Sidi Bou Said, Kasserine and Kairouan. Each night, the protests become more spread out.

The security forces use tear gas against the protesters who in turn block roads and burn rubber tires. In several districts of the Tunisian capital, they have broken shop windows and cars parked in the street, looted government offices and financial institutions.

The mass unrest in the country comes after the introduction of a 4pm curfew and total quarantine that the Tunisian government imposed for several days because of an increase in the number of coronavirus cases. But this has not stopped the protesters.

The security forces responded with a campaign of mass arrests, confiscating homemade weapons, Molotov cocktails and even cash. According to law enforcement officials, about 900 people had been arrested by Monday evening. More than half of them were minors.

© REUTERS / ZOUBEIR SOUISSI
People Protest in Tunis Over COVID-19 Lockdown and Economic Situation
The attitude of civil and political forces to these protests has been ambiguous, and the assessment of what is happening has led to a widespread debate in Tunisian society.

Sami Tahiri, a spokesman for the Tunisian General Labour Union (UGTT), confirmed that the events were a mixture of protest and unrest, the cause of which was social tension.

“Young Tunisians have become disillusioned with the achievements of the Jasmine Revolution. The 10 years since those events were the starting point of the protest: its goals have never been achieved. The citizens have not seen any progress whatever”, he said.

However, Tahiri said that the opposition forces tried to exploit the legitimate right of Tunisian citizens to protest and that they compromised the peaceful protests.

“Initially it was peaceful, the demonstrations took place during the day. Then the night clashes, pogroms, looting and robberies started. Yes, it all started after the law enforcement authorities decided to push back too hard against the daytime protests. However, it should be understood that some opposition forces took advantage of the situation to sow confusion in politics and society”, he continued.

Is It Not About Politics?

On the other hand, Abdel Rahman al-Hudhaily, head of the Tunisian Forum for Economic and Social Affairs (FTDES), ruled out any political influence on the protests – the unrest was the result of the Tunisians' low standard of living, something which had been building tension for years.

“Today we have a million unemployed in Tunisia. Another 13,000 or so have migrated illegally to Italy and are not always able to send help to their families. The level of tension in Tunisian society after a long period of transition to democracy is now very high and will only continue to grow – the economic and social problems cannot be resolved so quickly. This year is expected to be very rich in protest movements”, the expert explained.

He added that the Tunisian government was fundamentally flawed in its response, which only fuelled the wave of discontent.

“The government's actions in its attempts to crush the protests are inherently criminal. Moreover, the demands made by the protesting youth have arisen as a result of general poverty, marginalisation and negative social reality. This has nothing to do with the desire to overthrow this or that government”, he added.

At the same time, Naji Jamal, an MP for Tunisia's largest party in parliament, Ennahda Movement, is convinced that the mass unrest cannot be called a “revolution of the hungry”, as it was initially presented on social media and in the press.

“It is simply absurd to compare the current unrest with a revolution. Since when does a series of mass street crimes orchestrated by some opposition political forces qualify as a revolution? I should point out that most of the detainees are minors and large sums of money have been seized from them. This seriously calls into question the legitimacy of such mass actions”, he stressed.

Government Must Be Held Responsible

Mohamed Ammar, a member of the opposition party Democratic Current, and president of the Democratic Bloc, stressed that all the protests were spontaneous – the opposition failed to coordinate them. Moreover, the government must assume responsibility for the safety of the protesters.

“One should note that people took to the streets, not because of any calls, but because the socio-economic situation in the country has hardly changed in the past 10 years. It is foolish to blame it on the coordination of the opposition forces. That said, the government should have introduced economic reforms instead of strip-searching the youth, robbing them of their last possessions, and chasing them off the streets”, the politician said.

The opposition MP held the government responsible for the events, accusing it of shying away from solving the crisis and focusing only on the internal political struggle. At the same time, he noted that the opposition forces were also strongly opposed to violence and looting.

The mass unrest in Tunisia comes against the backdrop of the 10th anniversary of the Jasmine Revolution that toppled President Zine El Abidine Ben Ali.